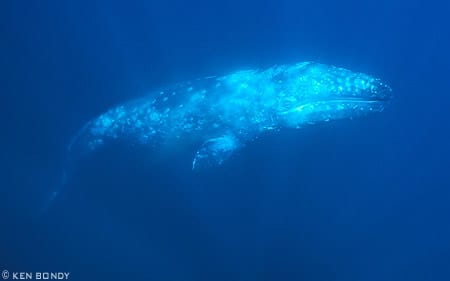 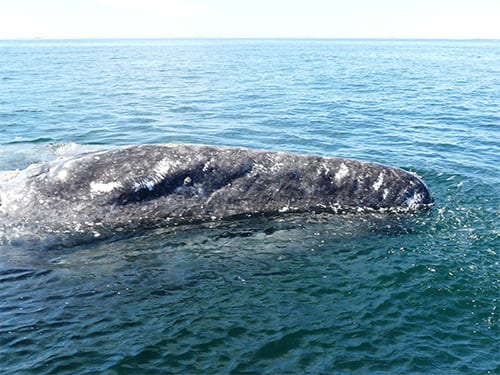 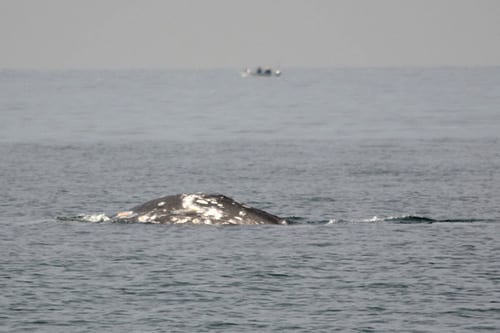 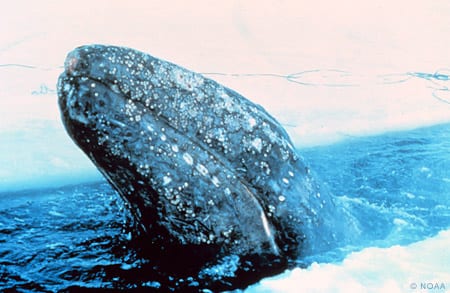 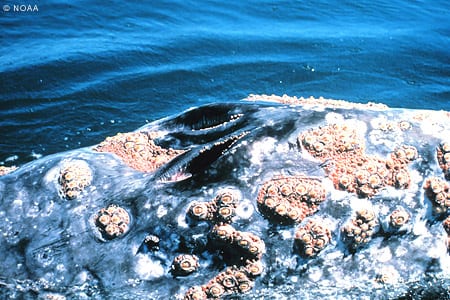 Gray whales, Eschrichtius robustus (Lilljeborg, 1861), are the single member of the Family Eschrichtiidae, with two remaining key populations known as the Northeast Pacific (American) stock and the Northwest Pacific (Asian) stock. Gray whales are mysticetes (baleen whales) with streamlined bodies and narrow tapered heads. Their arched upper jaws slightly overlap their lower jaws. Their upper jaws (rostrums) are dimpled with each containing stiff hair. The gray whale’s throat has 2-5 grooves which are 1.5 m in length. Its dark skin has gray patches and white mottling and often contains many scratches, patches of barnacles, and orange whale lice (amphipods feeding on whale skin and damaged tissue such as a wound). Newborn calves are dark gray to black and some have distinctive white markings. The gray whale has no dorsal fin but two-thirds of the way back on its body is a prominent dorsal hump followed by 6-12 knuckles along the dorsal ridge that extend to the flukes (tail) which is 3.7 m across, pointed at the tips and deeply notched in the center. Gray whale flippers are paddle-shaped and are also pointed at the tips.

Migrating gray whales have predictable breathing patterns, generally blowing 3-5 times in 15-30 second intervals before raising its fluke and then diving for 3-5 minutes. A gray whale can dive up to 15 minutes and travels at 4.8-9.6 kph. Mother gray whales are very protective of their calves, and earned the name “Devilfish” from early whalers in lagoons because they often protected their young violently. Orca (killer whales) are the gray whale’s main predator and many gray whales have orca teeth scars on their flukes.

During the Arctic winter, when the gray whale summer feeding grounds (Bering and Chukchi Seas) are frozen, the whales migrate to protected equatorial lagoons to calve and mate. Gray whale migration is the longest known of any mammal at 16,000-22,530 km round trip, migrating each fall and spring, mainly along the western coast of North America though not all whales make the migratory trip.

During migration they swim steadily, surfacing every 3-4 minutes, blowing 3-5 times while following coasts closely and may be using them to help migrate. Gray whales are often seen “spy-hopping” where a whale sticks its head straight up out of the water, perhaps to make note of land features during migration or as a means of social interaction. Gray whales are the most coastal of the baleen whales and are often found within a kilometer of the coast, although an increase in boat traffic seems to have forced the whales to stay farther out. Because of their liking for inshore waters, gray whales are some of the best known cetaceans.

Gray whales are also one of the most heavily parasitized of the cetaceans, hosting both ectoparasites (parasites which live on the surface of a host and are dependent on at least one gene or its product from that host to complete their own lifecycle) and internal parasites. They carry both barnacles and whale lice in great abundance. The barnacles tend to live on the top of the animal’s short head, around the blowhole and also on the anterior part of the back. This also adds to the mottled appearance of the whale’s skin.

Gray whales inhabit shallow coastal waters of the eastern and western North Pacific often sighted along the North American Pacific Coast between the arctic and the equatorial lagoons of Baja California, Mexico. Frequently visible from shore, gray whales provide opportunity for land and boat observation, and commercial whale watching has become a major industry along its migration route. The southward journey takes 2-3 months and the whales remain in the lagoons for 2-3 months allowing calves to build up thick layers of blubber for the northward migration. The return trip north takes another 2-3 months and mothers and calves travel very near shore on the northbound migration to avoid their main predators, orca. The gray whale has also been spotted in the North Atlantic Ocean, as well as in the Arctic Ocean.

The diet of the gray whale, Eschrichtius robustus, is mainly composed of bottom-dwelling amphipods, isopods, polychaete worms, mollusks, and other invertebrates. The gammarid amphipod, Ampelisca macrocephala, is most likely the most commonly eaten prey.

As a baleen whale, it has a series of 130-180 fringed overlapping plates hanging from each side of the upper jaw, where teeth might otherwise be located. These plates consist of a fingernail-like material called keratin that frays out into fine hairs on the ends inside the mouth next to the tongue. The plates are off-white and about 5-25 cm in length.

Gray whales feed primarily during the summer months of long daylight hours in the cold Arctic waters of the Bering and Chukchi seas. To feed, the whale dives to the sea floor, turns on its side (usually to the right), and swims forward along the bottom of the sea, forcing its head through the top layer of sediment along the sea floor. It is there that the whale scoops up its invertebrate prey as well as gravel and mud, leaving a trail behind. The whale then surfaces, straining the sediment through the baleen, which permits only the food to remain in the mouth to be swallowed. The two longitudinal grooves of the throat can stretch open and allow the mouth to expand during feeding, permitting the animal to take in more food. During the entire feeding season the whales must store up enough fat to fast during the breeding season. Then by the time the whales return to their feeding ground, they have lost up to one-third of their body weight. Even though the whale feed mainly during the months spent in the Arctic waters, they may feed if the opportunity arises at other times during the year.

Gray whales reach sexual maturity between 5-11 years of age when they typically reach 11-12 m in length. Mating has been noted at all times of the year with most conceptions occurring within a three week period during the southward migration, with females in the late stages of their pregnancies leading the way. Mating has also been observed in the lagoons of Baja California. December 5th is usually the peak of the mating season for gray whales. Courtship and mating behavior are complex, and frequently involve 3 or more whales at the same time.

Gestation is 12-13 months with calves weighing 500-680 kg which are about 4.5 m at birth. Calves nurse 7-8 months on 53% fat rich milk (human milk is 2% fat). Gray whales usually bear a single calf about every 2 years. Calves are nursed for around 7 months, during which time they gain motor coordination and establish the mother-calf bond that is needed to keep them together on the migration northward. They are then weaned in the north in the feeding grounds. Gray whales average lifespan is about 50 years with one individual recorded as 77 years old.

Gray whales are frequently observed approaching small boats in the shallow lagoons where they calve and mate and actually allow humans to touch them. The reason why remains unclear but some believe it is out of curiosity whereas others believe it may be due to the sound of the boats motors and that they are being defensive of their calves by checking out the intruders.

Gray whales have been killed by humans for its oil, meat, hide, and baleen. It was or still is hunted by the natives of northwestern America, eastern Siberia, northern Europe, Japan and Korea. Because they tend to migrate close to the shore, gray whales are very easy to locate and and kill.

Formerly there were three gray whale populations: a North Atlantic population, now extinct, most likely the victims of over-hunting; a Korean or Northwest Pacific (Asian) stock now very depleted, also probably from over-hunting; and the Northeast Pacific (American) population, the largest surviving population. Hunted to the edge of extinction in the 1850s after the discovery of the calving lagoons, and again in the early 1900s with the introduction of floating factories, the gray whale was given partial protection in 1937 and full protection in 1947 by the International Whaling Commission (IWC). Since that time the Northeast Pacific (American) gray whale population show some signs of recovery and now numbers between 19,000 and 23,000.