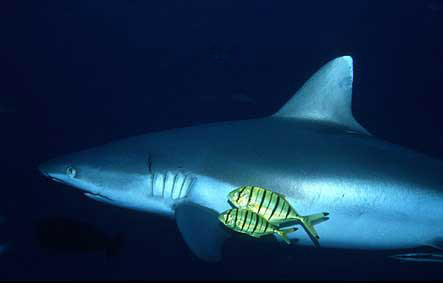 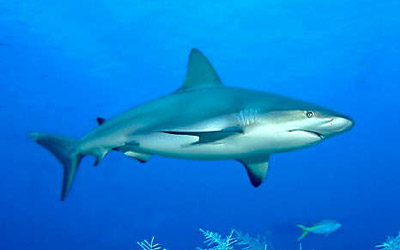 Gray reef sharks, Carcharhinus amblyrhynchos (Bleeker, 1856), aka grey reef sharks, blacktail reef sharks, bronze whalers, shortnose blacktail sharks, and whaler sharks, are dark gray or bronze-gray above (dorsal side) and white below (ventral side); their caudal (tail) fins have a conspicuous wide black posterior (rear) margin; the undersides of their pectoral and pelvic fins have black tips and posterior margins, but their fins otherwise are not conspicuously black or white-tipped except for a pale-tipped first dorsal in some individuals in the Indian Ocean. They are a medium-sized to large shark with broadly rounded snouts. The origin of their first dorsal fin is usually over or just in front of the rear tips of their pectoral fins. They have no interdorsal ridges. Maximum size is reported to reach up to 2.55 m; however the largest measured on record was 1.72 m (female). Most are <1.5 m in length. Their maximum weight is 34 kg and their maximum reported age is 25 years.


Gray reef sharks occur on continental and insular (island) shelves and the oceanic waters adjacent to them. They are common on coral reefs, often in deeper areas near drop-offs, in atoll passes, and in shallow lagoons adjacent to areas of strong currents. They form schools during daylight hours in aggregations of up to 100 individuals. Although they are active during the day, they are more active at night when individuals spread out over large areas of the reef, often entering shallow lagoons. They spend their time during the day cruising along the shallow forereef and in reef channels, especially in areas with strong current; individuals often move into reef passes with ebb tides. The average home range is 4.2 km2.

They are found throughout the Indo-Pacific: Madagascar and the Mauritius-Seychelles area, possibly India; also in the Red Sea to South Africa where Carcharhinus wheeleri, the blacktail reef shark, is found. In the Pacific, the gray reef shark ranges from southern China to northern Australia and the Tuamotu Archipelago to Hawaii. This is one of the three most common reef sharks in the Indo-Pacific, the two others are blacktip reef sharks, Carcharhinus melanopterus, and whitetip reef sharks, Triaenodon obesus. They are found in depths between 0-800 m. A gray reef shark was photographed at 800 m by a submersible off Hawaii.

Gray reef sharks feed on reef fishes, squids, cephalopods, crabs, lobsters, and shrimps. They have been observed herding fishes against the reef face before attacking. They tend to be aggressive under baited conditions and readily enter into an excited mob feeding pattern (true feeding frenzies are extremely rare), at which time they may become quite dangerous to humans.

Gray reef sharks are a curious and aggressive species repeatedly indicated in human attacks. They should not be touched, cornered, or approached by divers. They performs a dramatic threat display, featuring a raised snout, stiffly lowered pectoral fins, an arched back, and exaggerated swimming movements. They are fished commercially for human consumption, fishmeal and other shark products. This species is important in dive ecotourism in French Polynesia, Palau, and the Maldives.

This widespread social species was formerly common in clear tropical coastal waters and oceanic atolls. Its restricted habitat choice, site fidelity, inshore distribution, small litter size, relatively late age at maturity and increasing mismanaged fishing pressure suggests that this species is under threat. Although caught in tropical multi-species fisheries, it has considerably greater value if protected for dive tourism. This species is quickly being depleted, particularly in the Maldives.

The gray reef shark, Carcharhinus amblyrhynchos, is listed as Near Threatened (NT) on the IUCN Red List of Threatened Species: