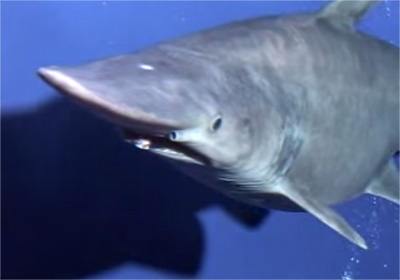 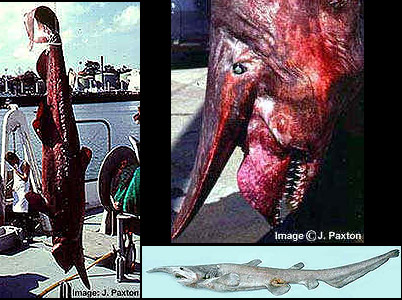 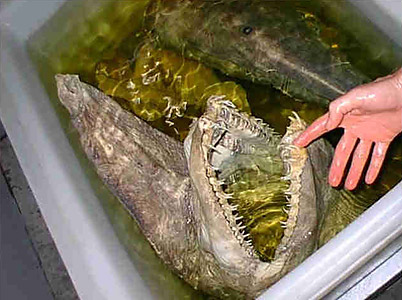 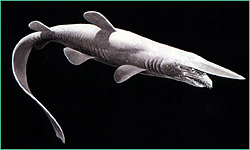 Goblin sharks, Mitsukurina owstoni (Jordan, 1898), are bizarre, sinister-looking creatures (mainly after they die). Growing to a length of over 3.8 m, they have a soft, flabby body, pinkish-gray color, and a peculiar, blade-like snout overhanging long, highly protrudable jaws with slender, fang-like teeth. The jaws are highly specialized to rapidly extend and quickly snap up small prey. The goblin shark has long, sharp teeth in the front of its jaws used to capture prey; the upper teeth are slightly longer than the lower teeth. Their teeth in the back of their mouth are smaller and used to crush prey. As with other sharks, the teeth are located in rows that rotate into use as needed.

Their length at birth is unknown; the smallest free-swimming individual was 1.07 m long. They reach an average length of about 1.6 m, with the largest on record, a male, measured at 3.8 m; females may grow even larger.

The goblin shark is a demersal (dwelling at or near the bottom) to mesopelagic inhabitant of outer continental shelves and slopes found at depths ranging from 40-1,200 m. They are slow-moving and neutrally buoyant. Many have been caught off Honshu, Japan, at depths of 60-280 m. They live near the sea bottom in specific locations in the Pacific, Atlantic and Indian Oceans. About half of the known specimens were found in the Sagami and Suruga Bays in Japan, others off Kaikoura, New Zealand and southern Africa. A substantial population has been reported off Madeira. In Australia, goblin sharks are found off New South Wales and possibly southern Australia.
https://youtube.com/watch?v=dCPwUQPNWxw

Photo 2 of the goblin shark photos above shows a goblin shark caught at a depth of 960 m in 1983 by the Fisheries Research Vessel (FRV) Kapala off Sydney, New South Wales. This is one of two large male goblin sharks (3.6 m and 3.8 m) trawled by FRV Kapala from New South Wales waters. Both specimens are registered in the Australian Museum fish collection.

Records of stomach contents in goblin sharks are rare; known prey includes small bony fish, cephalopods, and an unidentified crab. This apparently sluggish species feeds in mid-water and possibly on or near the bottom; teeth have been found embedded in submarine cables. They likely use their electrosensitive rostrum to detect prey and capture it from close range using a combination of their protruding jaws and pharyngeal suction.

Mitsukurina owstoni is almost certainly ovoviviparous, where embryos feed on yolk sacs and other ova (eggs) produced by the mother and hatch within her body. As in other lamnoids; no pregnant specimen has been collected, thus no data is available on gestation period, number of pups, pupping season, or nursery grounds.

Males reach sexual maturity at about 2.3 m, one 3.8 m specimen had sperm in the seminal vesicles and calcified claspers, indicating probable maturity; no data on size at maturity in females. No data on growth rate, age at maturity, or longevity for either sex.

The goblin shark is fished commercially off Japan and sporadically taken as bycatch while deep-sea longlining for scabbardfish/cutlassfish (Family Trichiuridae) off Portugal. Elsewhere, they are taken primarily as bycatch of deep-water trawls and occasionally with deep-water longlines, deep-set gillnets, and possibly purse seines.

The goblin shark is probably harmless, but has rarely been encountered by humans. Although probably common, this species is rarely seen and is thus poorly known; catches should be preserved and reported asap.

This rare species has only been described in the scientific literature about 45 times; half from Japan, the others from New Zealand and southern Africa.