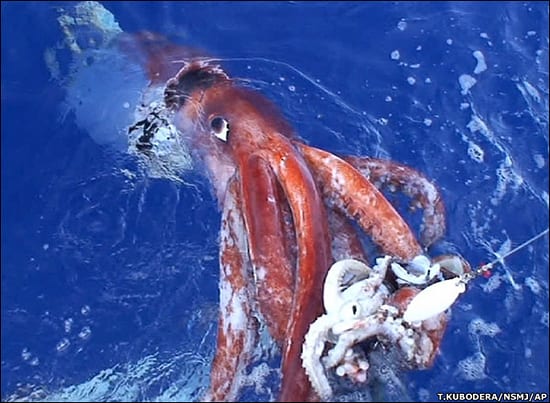 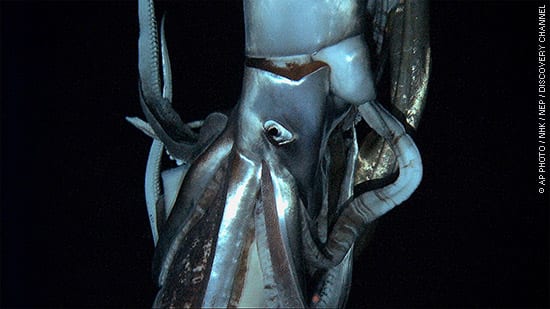 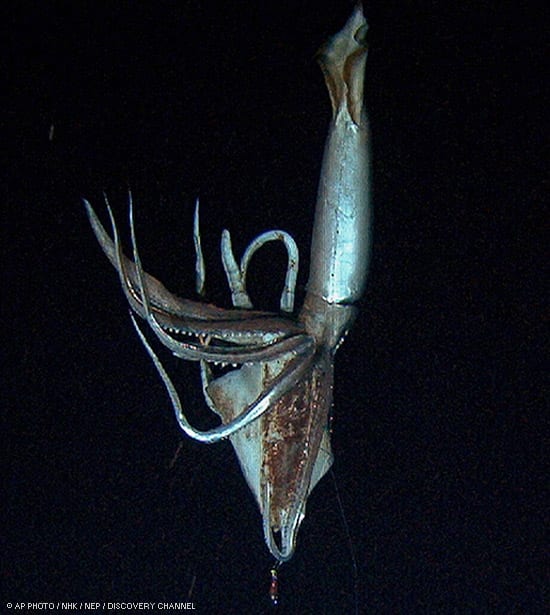 Giant squid, Architeuthis dux (Steenstrup, 1857), of the family Architeuthidae, are possibly the largest known cephalopod, the largest known mollusk and, likely, the largest invertebrate ever known to exist (except for possibly colossal squids, Mesonychoteuthis hamiltoni which may have a mantle length nearly twice the size of the giant squid!). These squid have been reported frequently in the media as reaching up to 18 m (~60 feet) in total length, which includes the head, body, arms, and two long feeding tentacles—which are much longer than the rest of their body. The truth though is that giant squids average 3-9 m and reach up to 13 m in total length (see Whale Sharks and Giant Squids: Big or Bu!!$hit?). They can weigh up to 900 kg, but average 455 kg or less.

The giant squid have the largest eyes out of any animal in the world. They can be as large as a dinner plate. They function to detect the small amounts of light in the deep (including bioluminescent light).

They have 2 rows of suckers on the inner surface of their 8 arms and 2 tentacles. The suckers are sub-spherical cups lined with sharp, finely serrated rings of chitin in four longitudinal rows. These tentacular clubs are divided into three distinct regions: carpus, manus and dactylus. The manus of the giant squid has enlarged suckers along two medial rows. The suckers on the tentacles and arms are typically no larger than about 5-5.5 cm. The carpal region has a dense cluster of suckers, in 6-7 irregular, transverse rows.

At the base of the arms, they have a parrot-like beak characteristic of other cephalopods.

Like other squid species, giant squid contain dark ink used to deter predators. They have a sophisticated nervous system and complex brain. The circulatory system is closed, which is a distinct characteristic of the squid.

Because of their nervous system and large brain, they are of great interest to scientists, though they have never been observed in their natural habitat until very recently (see the photo above and the National Geographic link under References). Therefore, little is known about their behavior and interaction. They are believed to be solitary hunters; only individual giant squids have been caught in fishing nets.

“In 1965, a Soviet whaler watched a battle between a squid and a 40 ton sperm whale. In the case of this battle, neither was victorious. The strangled whale was found floating in the sea with the squid’s tentacles wrapped around the whale’s throat. The squid’s severed head was found in the whale’s stomach.

In the 1930’s a ship owned by the royal Norwegian Navy called the Brunswick was attacked at least three times by the giant squid. In each case the attack was deliberate as the squid would pull along side of the ship, pace it, then suddenly turn, run into the ship and wrap its tentacles around the hull. The encounters were fatal for the squid as its grip on the ship’s steel surface would come loose, and the animal slid off and fell into the ship’s propellers.”

There are many stories, myths, and mysteries about the giant squid, and it has been called the last great monster of the sea:

“One night during World War II a British Admiralty trawler was lying off the Maldives Islands in the Indian Ocean. One of the crew, A.G. Starkey, was up on deck, alone, late at night fishing, when he saw something in the water. ‘As I gazed, fascinated, a circle of green light glowed in my area of illumination. This green unwinking orb I suddenly realized was an eye. The surface of the water undulated with some strange disturbance. Gradually I realized that I was gazing at almost point-blank range at a huge squid.’ Starkey walked the length of the ship finding the tail at one end and the tentacles at the other. The ship was over one hundred and seventy five feet long.” – The Museum of UnNatural Mystery

These amusing stories suggest that giant squid may be aggressive animals, but again because few observations have been made, this is unknown (Giant squid caught on film in its natural habitat for the first time).


Giant squid are wide-ranging usually found near continental and island slopes from the North Atlantic Ocean, especially Newfoundland, Norway, northern British Isles and the oceanic islands of the Azores and Madeira to the South Atlantic in southern African waters; the North Pacific around Japan, and the southwestern Pacific around New Zealand and Australia. They are circumglobal in the Southern Ocean. Specimens are rare in tropical and polar latitudes.

Giant squid capture prey using their two feeding tentacles that grip their victims with serrated the saw-like sucker rings at their ends on what are called tentacle clubs. Once their prey is caught, they bring it to their powerful beak, and use their tongue-like radula with its small, file-like teeth to shred their prey before they swallow it.

Sperm whales and sleeper sharks such as Somniosus pacificus are the two known predators of adult giant squid. Juveniles are preyed on by deep sea sharks and fishes.

Little is known about giant squid reproduction. Females produce large quantities of eggs, in some cases more than 5 kg, that average 0.5-1.4 mm long and 0.3-0.7 mm wide. Females have a single median ovary in the posterior (rear) end of their mantle cavity and paired convoluted oviducts where mature eggs pass exiting through oviducal glands, then through nidamental glands. Like other squid species, these glands produce a gelatinous material used to keep the eggs together once they are laid.

It is thought that giant squids reach sexual maturity at about 3 years; males reach sexual maturity at a smaller size than females. Like other squid, it is thought that the two ventral (lower) arms are modified to transfer spermatophores to the female. As in most other cephalopods, the single, posterior testis produces sperm that move into a complex system of glands that manufacture the spermatophores. These are stored in the elongate sac, or Needham’s sac, which terminates in the penis from which they are expelled during mating. The penis is elongate and extends anteriorly beyond the mantle opening. Mating in the giant squid has not been observed, so the exact role of the penis is uncertain; however, some females have been found with spermatangia (sperm-containing sacs of the spermatophore) embedded in the tissue around the bases of their arms and head.

Giant squid, Architeuthis dux, could be an essential part of the food web as they are preyed on by deep-diving whales (e.g., sperm whales) or a keystone species in their deep-sea habitats.