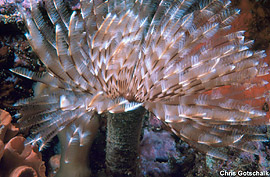 In human terms, giant feather duster worms, Eudistylia polymorpha (Johnson, 1901), are not actually so giant—they usually reach about 25.4 cm long and about 1.3 cm in width—but they unquestionably look like feather dusters. Encased in a translucent tan tube made of protein and filtered particles and sometimes covered in sand and bits of shell, they boast plumes, colored orange to maroon or brown which are sometimes banded with lighter pigmentation, about 6.4 cm wide, with about 30 feather-like reddish gills (called radioles) on each side of their tube. The gills serve a double purpose, respiration and feeding. They are also covered in eyespots, so the worms know when danger is near and can retreat into their tubes in an instant.

Giant feather duster worms can been spotted up and down the Pacific Coast from Alaska to San Diego and are especially common around Pacific Grove, California. They prefer either tide pools (where they often live in large numbers, giving the impression of a flowering garden) or shallows near the low-tide line in water up to 427 meters deep.

Giant feather duster worms feed on small food particles and plankton floating in the water and can only thrive in areas with moving currents that bring in new plankton, but they do not simply wait passively for them. Instead, they create a current in the water to direct the particles into its mouth. (This practice is called “active suspension” feeding.) By waving their “feathers,” they create a gentle water flow, which in turn creates vortices on the upper surface of their tentacles. The surface of their tentacles is bathed in sticky mucus that traps any particles unlucky enough to them, like a spider’s web. The two ciliated pinnules (feather-like parts) clustered on each side of their heads have a groove on their medial (middle) surface; once the ciliated “feathers” have waved enough food into the animal’s clutches, the groove directs the food particles into the mouth. (Another groove, the longitudinal groove, carries fecal waste and gametes away.) Feather dusters are voracious creatures and if the food is not present, will starve for a while and then shed their tentacle crown.

Giant feather duster worms’ means of fertilization are external. Oocytes may range from 140 to over 200 µm in diameter, depending on whether the species broods eggs or spawns freely. (In the latter case, the eggs are deposited in gelatinous masses either on the parent’s tube or on the seafloor.) In females, sperm receptacles may exist at the base of the crown tentacles. Gametes first accumulate in the abdomen and mature, enter the gonoducts (analogous to the human oviducts), then go on to the longitudinal (sometimes referred to as the fecal) groove. They are then directed upwards, out of the mouth, onto a series of ciliated palps, and into the sea. Once the zygotes are released, they float freely for three to four weeks before settling down.

Giant feather duster worms make excellent learning tools in labs, particularly for those interested in invertebrate anatomy, as their body is highly similar to those of other polychaete annelids, or “bristle worms” like bearded fireworms and Christmas tree worms, and even other segmented land worms from the Phylum Annelida.