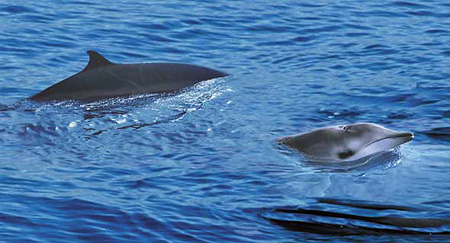 Gervais’ beaked whales, Mesoplodon europaeus (Gervais, 1855), also known as Gulf Stream beaked whales, European beaked whales, and Antillean beaked whales, are small whales with prominent beaks and a large tooth in their lower jaws situated about 15 cm back from the tip. In males this large tooth protrudes from the mouth fitting into a groove in their upper lip. Females appear toothless as the tooth does not project beyond the gums. Their body is a dark gray to black with a lighter ventral (under) side. Their average length is about 4.3 m but they can reach up to 5.45 m, flukes (tails) are 91.5 cm wide, and their dorsal fins are 18.7 cm high.

These rare whales are difficult to spot even in relatively well-studied areas within their range. They are assumed to be deep divers that live in small groups or pairs.

Beaked Whales (Family Hyperoodontidae)
Beaked whales, in general, are medium-sized to moderately large whales with a single pair of grooves on their throats. They have distinct snouts and often the few teeth present are only visible in adult males. They have a single nostril or blowhole. Beaked whales are generally slender with a small dorsal fin placed towards the rear on their backs. The rear edge of their flukes (tails) usually lacks a well-defined notch. These whales are deep divers and are rarely seen by humans. Many species are known only from a few specimens and little is known about the life history and biology of the entire group. All members of this family, except Blainville’s beaked whales, are difficult to distinguish from each other, and study by museum experts is usually necessary for identification.


Gervais’ beaked whales are found in the North Atlantic and Gulf of Mexico from Texas and Florida to New York, Ireland, the English Channel, Canary Islands, south to Jamaica, Curaçao, Trinidad, Ascension Island, Mauritania, and Guinea Bissau. This geographical distribution has been inferred from strandings, therefore it does not provide a full representation of the range of this species. Recent findings have indicated a larger distribution in the temperate waters of the North Atlantic along the eastern coast of central America and in the Gulf stream. They are the most commonly stranded beaked whale in the Gulf of Mexico with several strandings on Texas beaches noted. Although there are no population estimates for these whales, they are thought to be rare. They are believed to inhabit deep waters close to shore but little information is available on movements.

Gervais’ beaked whales are known to prey on squid and fish.

Little is known about these whales. Strandings are believed to be associated with calving, which likely occurs in shallow waters. Specific data on the reproductive habits are currently not available.

From 1992 to 1998 a total of 49 beaked whales were found stranded along the US Atlantic coast between Florida and Massachusetts, 28 of which were identified as Gervais’ beaked whales. In the mid to late 1980s several unusual mass strandings of beaked whales, including also Gervais’ beaked whales, were associated with naval activities in the Canary Islands, and again in September 2002 during a naval NATO maneuver involving low frequency sonar around the Canaries.