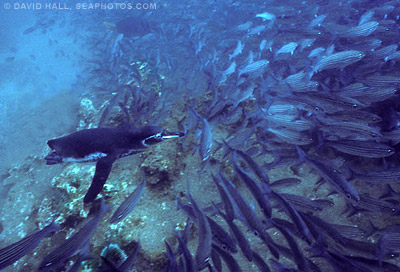 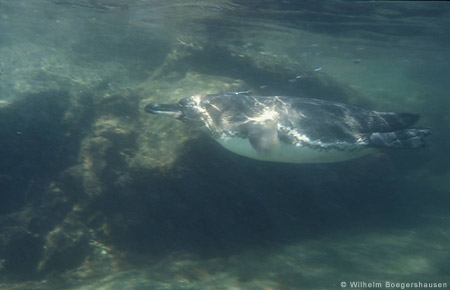 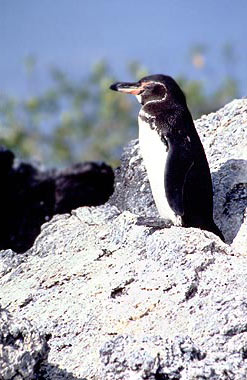 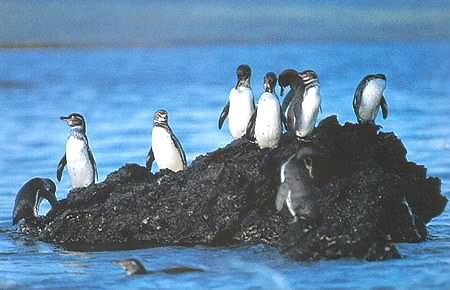 Yes, penguins do exist on the equator! Galapagos penguins, Spheniscus mendiculus (Sundevall, 1871), are the most northerly occurring of all the penguins (third smallest of the world’s 17 or so penguin species as well). They stand 40-45 cm tall and weigh 1.6-2.5 kg. Galapagos penguins have a thin white band that runs under their chin and a black upside down horseshoe shape around their belly. The Galapagos penguin may look like the magellanic penguin but they are smaller and their black markings on their belly are thinner. They are found only around the Galapagos and Isabela Islands just north of the Equator.


Galapagos penguins are thought to have been brought to the Galapagos islands by the Humboldt Current, which brings cold waters and nutrients north from Antarctica. One of the main problems for these penguins is keeping cool. Living close to the equator it can get to over 38°C during the daytime. They keep cool by swimming and hunting for food in the cold water of the Cromwell Current during the day. During the cool nights they sleep and nest on the land. They hold their flippers out to help cool themselves and protect their feet from getting sunburned by holding their flippers over their feet when on land.

Galapagos penguins eat mostly small fish such as mullet and sardines. They are dependent on the ocean currents to bring fish to their feeding grounds. 20 years ago an El Niño caused a severe shortage of food where over 70% of the Galapagos penguins died.

When swimming on the surface, penguins in general move slowly, with most of their body submerged and their head sticking up. At times, however, they swim with their head down in the water, looking for fish. But when they move into action, they dip under the water and move with incredible speed, using their powerful flippers/wings for propulsion and their feet as rudders.

Galapagos penguins mate for life and are opportunistic breeders. In good conditions, a pair can produce three clutches in a year. They normally molt before breeding, and are the only penguins to molt more than once a year. During the two week molting period they avoid the water, and fast. Courtship involves preening of the mate’s head, wing slapping and bill crossing.

Nesting occurs on Fernandina and Isabela islands throughout the year with the majority of nests being seen May-January. Some penguins may mate as often as every 6 months. Female penguins lay 1-2 eggs each season. The eggs are laid in burrows under the lava and the pair shares the responsibility of watching over the nest. In years with warm waters from the El Niño events, life changes in the Galapagos including heavy declines in local penguin populations.

Both parents tend the eggs for 38-40 days. Chicks molt, get their adult feathers and are on their own in about 60-65 days.

IUCN – The World Conservation Union designation: Endangered population estimated between 3,000-8,000 penguins. It is reported that there are about 800 breeding pairs left in the world.

In the water, they are preyed on by sharks, fur seals and sea lions. On land, major threats include overheating, starvation, or predation by introduced cats, dogs and rats on Isabella Island. To avoid terrestrial enemies, penguins simply turn their backs and let their black coats blend naturally into the surrounding black lava rocks.

ENDANGERED (EN)
A taxon is Endangered when the best available evidence indicates that it meets any of the criteria A to E for Endangered (see Section V), and it is therefore considered to be facing a very high risk of extinction in the wild.