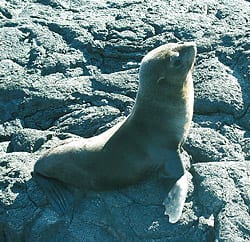 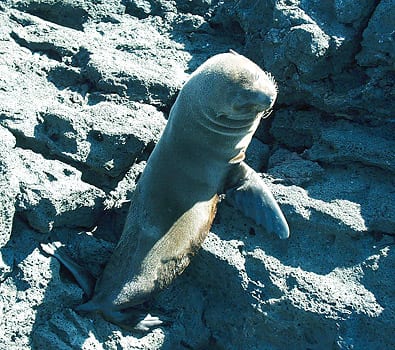 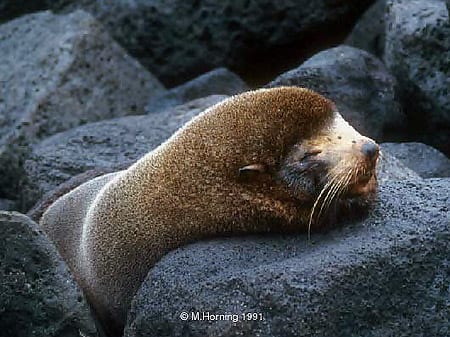 Galapagos fur seals, Arctocephalus galapagoensis (Heller, 1904), are gray-brown above and lighter brown below. Adult males measure up to 1.5 m long and weigh 64 kg on average. Adult females are smaller, measuring an average of 1.2 m in length and weighing from 22-34 kg (average 28 kg).

Southern fur seals (Antarctic, Galapagos, Guadalupe, Juan Fernandez, New Zealand, South African/Australian, South American, and Subantarctic fur seals) are the most land loving seals of the Family Otariidae spending only about 70% of their life in the water. Nevertheless, they are still deep divers; females have been observed diving to a maximum depth of 169 m for 6.5 minutes. On average, females dive for about 16.4 hours to depths of no more than 30 m at night when foraging for food. Nowak (1999) states that “foraging trips have been found to last 50-70 hours at the time of the new moon but only 10-20 hours at the time of the full moon.” During the warm months, females spend 4-6 days in the water foraging for food and 1 day on land. Adult males are very territorial defending territories that can extend 200 sq m. They will not abandon their territories to eat until all of their stored energy has been depleted. Approximately 30% of males die in territory fights annually. Females also defend territories which are about half the size of male territories. Unlike other seal species that prefer sandy beaches for their terrestrial habitat, the typical territory of a Galápagos fur seal consists rocky areas with shade for cooling. These seals must maintain an internal body temperature of about 37.7°C, so they cool themselves in tide pools, a method of thermoregulation that females teach to their pups to keep them from overheating (Limberger, 1986). These seals also have a smaller body size to release heat quickly, and they can also sweat, depending on their level of hydration. Thermoregulation is also controlled internally by the cardiovascular system by directing blood flow away from the flipper is the seal is too cold, and toward the flippers if the seal is too warm.

Galapagos fur seals are members of the Family Otariidae (fur seals and sea lions), which includes 14 species in 7 genera. The distribution of this family is complex. They are found along coasts of North and South America, central and northern Asia, New Zealand, and several other islands, including the Galapagos.

Sea lions, in general, are large, ranging from around 150 kg to over 1,000 kg, and males tend to be much larger than females. Their bodies are slender and elongate. Small, cartilaginous external ears are present. All otariids have fur, however, sea lions have relatively coarse hair and fur seals have dense underfur. Both are generally shades of brown without stripes or other contrasting markings. The fore flippers of otariids have small claws, and are long and paddle-like, measuring more than 1/4 of the length of the body. The surfaces of the fore flippers are leathery. The hind flippers are also large. They differ from those of true seals (phocids) in that they can be rotated under the animal when it is on land to support the body and aid in locomotion. Otariids also have a small but distinct tail.

Otariids tend to be highly social and forming large herds during the breeding season. Depending on their size and strength, individual males maintain harems of 3-40 females. They establish territories on their breeding grounds before females arrive, which they defend aggressively from other males. Females give birth to pups from the previous year’s breeding season soon after they arrive, which is followed by mating. A period of delayed implantation insures that the young will be born in a year when the breeding herds are re-established.

Galapagos fur seals, Arctocephalus galapagoensis, are the smallest of the pinnipeds and live only around the Galapagos Islands. This species does not seem to share territory or food with the other pinniped species in the islands such as the Galapagos sea lions.

Galapagos fur seals feed on fish and cephalopods, close to shore and exclusively at night when their prey migrates closer to the surface. Sharks and orca are known to be predators but not to any great extent.

Galapagos fur seals are a polygynous species. They have the longest pupping period of any fur seal (or pinniped). Pups are born between mid-August and mid-November. Pups weigh 3-4.5 kg at birth. Females reach sexual maturity at 3-4 years, males around 7-10 years of age. The preferred breeding habitat is rocky shores with sea caves on the western coasts of the islands. Females give birth 2-3 days after coming ashore. About one week after giving birth, females begin alternating between foraging for food in the water for 1-4 days and nursing for 1 day. The duration of the nursing periods and the feeding trips appear to vary with the phase of the lunar month—mothers have been seen to spend 1.5-75 hours (average 22.5 hours) on shore feeding their pup and 3.5-127 hours (average 33.5 hours) feeding at sea. Observations have shown that the pups spend more time playing and moving around when their mother is away, although they have to take care since females can be quite ferocious towards pups that are not their own. The female mates about 8 days after giving birth. As with other fur seals the males maintain breeding territories, in this case for about 27 days at a time. The Galapagos fur seal has the longest nursing period of any seal, the pups finally being weaned between 1-2 years but sometimes even being nursed at the age of 3 years. Only the walrus has a nursing period close to this. The nursing period of a particular pup tends to be longer if food has been scarce during the time of its nursing, and the long period may therefore be a mechanism that the species has evolved to improve survival rates through such events as El Niños.

Pups begin to swim a little after a few months and start to engage in some independent feeding at 9-12 months. They molt into their grayish-brown adult fur at about 4 months. Galapagos fur seals do not migrate.

Thousands of Galapagos fur seals, Arctocephalus galapagoensis, were killed by commercial sealers in the 19th century. They became a protected species under Ecuadorian legislation in the 1930s, however this was not enforced until 1959 when most of the Galápagos Islands were established as a National Park. The waters around the islands are also protected, including a no-fishing zone, to a distance of 40 nautical miles. This species is listed as Endangered (EN A2a) on the IUCN Red List due to: “…its limited distribution, fluctuating (not stable) population size, and marked decline in the last 30 years (in excess of 50%).” and they are also listed as an Appendix II species under CITES.

ENDANGERED (EN)
A taxon is Endangered when the best available evidence indicates that it meets any of the criteria A to E for Endangered (see Section V), and it is therefore considered to be facing a very high risk of extinction in the wild.

Because of the geographic position of the Galapagos Islands, El Niño events can significantly reduce food supplies causing starvation among the seals, which happened during the 1982-1983 El Niño event. Almost all of young fur seals were lost along with about 30% of adult females and non-territorial males and almost 100% of the large territorial males.

These fur seals have also been at risk of mortality due to entanglement in gill nets, but this problem seems to have been solved. Feral dogs have also attacked and killed Galapagos fur seals, however this problem is now controlled by the Galapagos National Park Service.