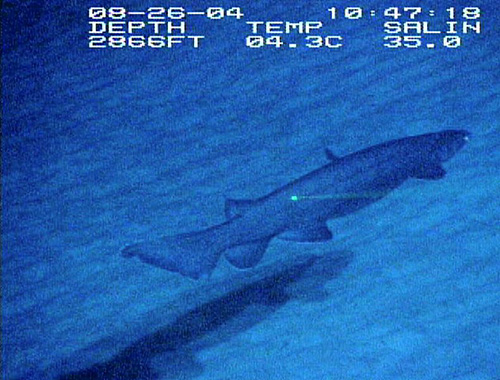 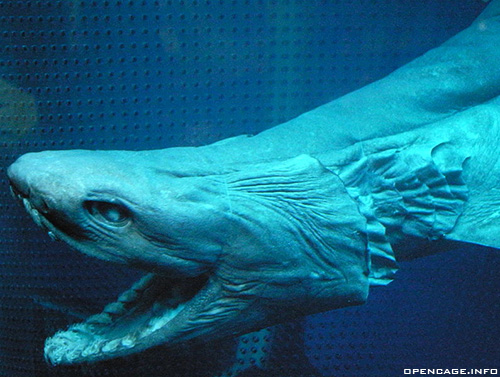 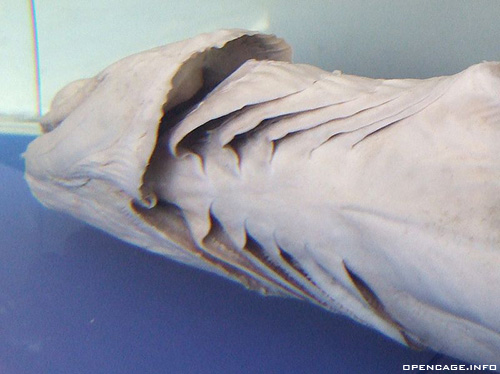 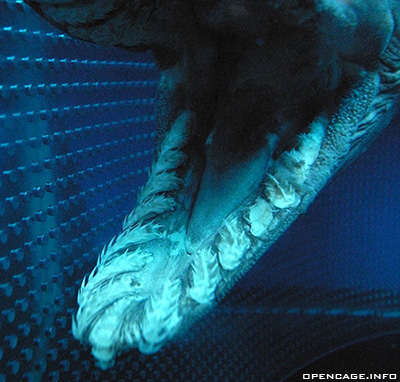 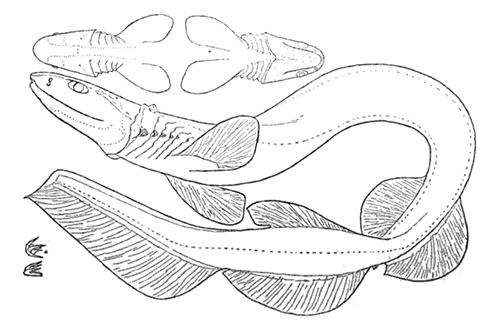 Frilled sharks, Chlamydoselachus anguineus (Garman, 1884), aka frill sharks, frill-gilled sharks, Greenland sharks, scaffold sharks, and silk sharks are members of the most ancient frill and cow sharks order, Hexanchiformes. Hexanchiform sharks have a single dorsal fin, either six or seven gill slits (versus the 5 found in all other existing sharks), and no nictitating membranes (protective third eyelids). The frilled shark, Chlamydoselachus anguineus, is currently one of only two known species of frilled sharks. The southern African frill shark, C. africana, was recently discovered (2009) off southern Angola, Namibia and South Africa. They are both very different in other ways from the cow sharks and are likely to be moved to their own order Chlamydoselachiformes in the near future.

Frilled sharks, Chlamydoselachus anguineus, are deepwater eel-like sharks that reach lengths up to 2 m and are thought to reach sexual maturity when they are 1.35 to 1.5 m long. They are dark brown or gray in color above, sometimes lighter below, and have six pairs of “frilly” gill slits where the first gill slit is joined under their jaws forming a sort of collar. Frilled sharks’ heads are broad and flattened with short, rounded snouts. Their nostrils are vertical slits, separated into incurrent and excurrent openings by a leading flap of skin. The moderately large eyes are horizontally oval (like a cat’s).

Their mouth is located at the leading edge of their snout (terminal) rather than underneath like most sharks and they have small tricuspid teeth in both jaws. Their rows of teeth are rather widely spaced, numbering 19–28 teeth in their upper jaws and 21–29 teeth in their lower jaws. Each tooth is small, with three slender, needle-like cusps alternating with two cusplets. Their very long jaws are positioned terminally (at the end of the snout), as opposed to the underslung jaws of most sharks.

Frilled sharks also have a pair of thick skin folds of unknown function (possibly to help allow for expansion when digesting larger prey) running along their bellies, separated by a groove, and their midsections are relatively longer in females than in males.

Frilled shark differs from their southern African relative, C. africana, by having more vertebrae (160–171 vs 147) and more turns in the spiral valve intestine (35–49 versus 26–28), as well as differences in various proportional measurements such as a longer head and shorter gill slits. The maximum known length is 1.7 m for males and 2.0 m for females.

Frilled sharks are highly specialized for life in the deep sea with reduced, poorly-calcified skeletons and enormous livers filled with low-density lipids, which allows them to maintain their position in water with little effort. They are also one of the few sharks with an “open” lateral line, in which the mechanoreceptive hair cells are positioned in grooves that are directly exposed to the surrounding seawater. This configuration is thought to be the most primitive in sharks and may enhance their sensitivity to minute movements of prey in their proximity.

Many frilled sharks are found with the tips of their tails missing, probably from predatory attacks by other shark species.

These sharks, or a proposed giant relative, have been suggested as a source for reports of sea serpents.

Frilled sharks, Chlamydoselachus anguineus, are an uncommon “primitive” shark species typically found near the sea floor in waters over outer continental and island (insular) shelves and upper slopes, usually at depths between 120 and 1,280 m but up to 1,570 m and occasionally even at the surface.

Frilled sharks are thought to have a wide though patchy distribution (74°N – 58°S, 169°W – 180°E) in the Atlantic and Pacific Oceans. In Suruga Bay, Japan they are most common at depths between 50 m and 200 m.In the western Indian Ocean they are found off South Africa as C. africana. In the western Pacific, frilled sharks are known to live off Japan and south to New Zealand, New South Wales and Tasmania in Australia. In the eastern/central Pacific they have been observed off Hawaii, southern California to northern Chile. Frilled sharks have also been observed in the eastern Atlantic from waters off northern Norway to northern Namibia, and possibly off the eastern Cape of Good Hope in South Africa.

In the central Atlantic, they have been caught at several locations along the Mid-Atlantic Ridge, from north of the Azores to the Rio Grande Rise off southern Brazil, as well as over the Vavilov Ridge off West Africa. In the western Atlantic, it has been reported from off New England, Georgia, and Suriname.

Frilled sharks, Chlamydoselachus anguineus, feed on cephalopods (mainly squid), other sharks, and bony fishes. Feeding behavior has not yet been observed by this weak-swimming species, though they are thought to capture active, fast-moving squid by taking advantage of injured squid or those that are exhausted and dying after spawning. Alternatively, they may surprise their prey by curving their body like a spring, bracing themselves with rear positioned fins, and launching quick strikes forward like a snake. They may also be able to close their gill slits creating negative internal pressure to suck prey quickly into their mouth. They have many small, sharp, rear-pointing (recurved) teeth that function much like squid jigs which could easily snag the body or tentacles of a squid, particularly as they are rotated outwards when their jaws are protruded. Observations of captive frilled sharks swimming with their mouths open might also suggest that the small teeth, light against their dark mouths, may even fool squid into attacking and entangling themselves. 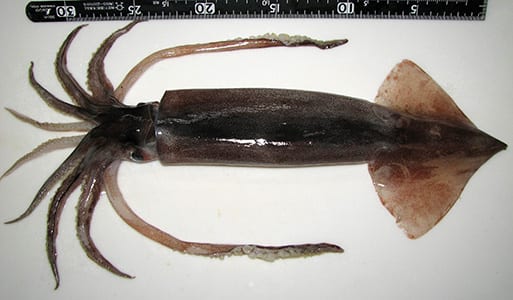 Using their long, extremely flexible jaws they should be able to swallow large prey (up to half its size!) whole, while their many rows of needle-like teeth would make escape essentially futile. Examining the length and articulation of their jaws appears to show that frilled sharks cannot deliver as strong a bite as more conventionally built sharks. Most captured individuals have been found with no or barely identifiable stomach contents, suggesting that they have a fast digestion rate and/or long intervals between feedings. One 1.6 m long individual, caught off Japan, was found to have swallowed an entire 590 g Japanese catshark, Apristurus japonicus. Squid comprise some 60% of the diet of these sharks in Suruga Bay and this includes not only slow-moving, deep-dwelling squid such as Chiroteuthis and Histioteuthis, but also relatively large, powerful swimmers of the open ocean such as Onychoteuthis, Sthenoteuthis, and Todarodes.

Frilled sharks, Chlamydoselachus anguineus, are aplacental viviparous (aka ovoviviparity) where the embryos emerge from their egg capsules inside their mother’s uterus and are nourished by their yolk until birth. Frilled sharks’ gestation period may be as long as three and a half years, the longest of any vertebrate. Between 2 and 15 young are born at a time (average is 6) measuring 40–60 cm long, and there appears to be no distinct breeding season (which is expected as these sharks inhabits depths at which there is little to no seasonal influence). Male frill sharks attain sexual maturity at 1.0–1.2 m long and females at 1.3–1.5 m. A possible mating aggregation of 15 male and 19 female frilled sharks was recorded over a seamount on the Mid-Atlantic Ridge.

Frilled sharks, Chlamydoselachus anguineus, are listed as Near Threatened (NT) by the IUCN Red List: “A generally rare to uncommon deepwater species, with a few localities where it is taken more commonly as bycatch in several fisheries. Not an important target species, but a regular though small bycatch in many bottom trawl, midwater trawl, deep-set longline, and deep-set gillnet fisheries. As bycatch, this species is variously either used for meat, fishmeal, or discarded. Occasionally kept in aquaria (Japan). There is some concern that expansion of deepwater fisheries effort (geographically and in depth range) will increase the levels of bycatch. Although little is known of its life history, this deepwater species is likely to have very little resilience to depletion as a result of even non-targeted exploitation. It is classified as Near Threatened due to concern that it may meet the Vulnerable A2d+A3d+4d criteria.”

On August 27, 2004, the first observation of this species in its natural habitat was made by the ROV Johnson-Sea-Link II, on the Blake Plateau off the southeastern United States (see the first photo above). On January 21, 2007, a Japanese fisherman discovered a 1.6 m long female alive at the surface, perhaps there because of illness or weakness from the warm water. It was brought to Awashima Marine Park in Shizuoka, where it died after a few hours (see the video above). Garman, and numerous authors since, have advanced the frilled shark as an explanation for sea serpent sightings. Because of the shark’s modest size, some cryptozoologists have posited the existence of a giant relative, particularly as larger Chlamydoselachus species are known from the fossil record.