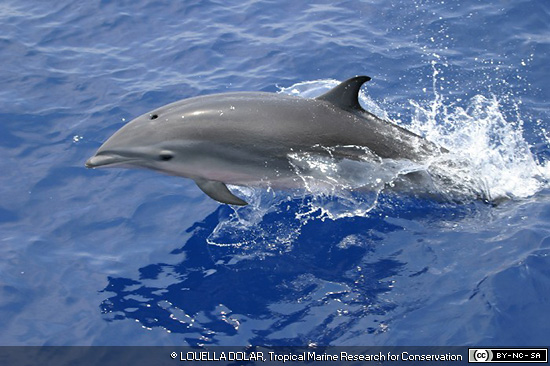 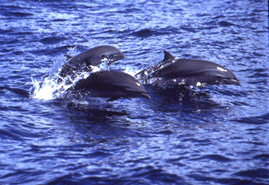 Fraser’s dolphins, Lagenodelphis hosei (Fraser, 1956), aka Sarawak or Borneo dolphins, are stocky cetaceans with short but distinct beaks. Adults measure about 2 m in length and weigh up to 210 kg. They have small, falcate (triangular) dorsal fins and small flippers and flukes. Their color varies with age and sex. Adults display a black stripe that extends down the length of their body, which is wider in adult males, absent or faint in juveniles, and variable in adult females. They also have striped marking on their faces. They are brown-gray in coloring with a lighter ventral (under) side.

Fraser’s dolphins form large schools consisting of hundreds and sometimes thousands of dolphins. These schools are often mixed with other cetaceans including: melon-headed whales, short-finned pilot whales, Risso’s dolphins, spinner dolphins, bottlenose dolphins and even sperm whales. In terms of human interaction, Fraser’s dolphins have been described as a shy dolphin in some areas, but more approachable in others.

The distribution and population of this species is not well known, however Fraser’s dolphins appear to be more common near the equator in the eastern tropical Pacific. They seem to be relatively scarce in the Atlantic Ocean, although they are seen from the Lesser Antilles, the Gulf of Mexico, and Venezuela. Infrequent sightings of Lagenodelphis hosei have been reported in the Indian Ocean near the east coast of South Africa, Madagascar, Sri Lanka, and Indonesia. Fraser’s dolphins are generally found in offshore waters, however they have been seen near shores surrounded by deep water such as near Indonesia, the Lesser Antilles, and the Philippines.

Strandings have been reported in temperate areas, which may have resulted from El Niño events in 1983-84. A mass stranding was also reported in France during that time.

Fraser’s dolphins, Lagenodelphis hosei, are thought to give birth to calves in the spring and fall following a gestation period of about 12.5 months. Newborns measure about 110 cm in length.

Fraser’s dolphins, Lagenodelphis hosei, populations are estimated to total about 289,500 in the Pacific Ocean.

Small numbers of Fraser’s dolphins are harpooned by subsistence hunters in the Indo-Pacific. This species has been harpooned by commercial interests selling their meat for bait and human consumption.

Fraser’s dolphins are caught as bycatch by purse-seines used by the tuna fishery in the eastern Pacific, and some have been caught in gill nets in Sri Lanka and the Philippines. Dolphin hunting was banned in the Philippines in 1992, which has reduced the sale of dolphin meat on the open market.