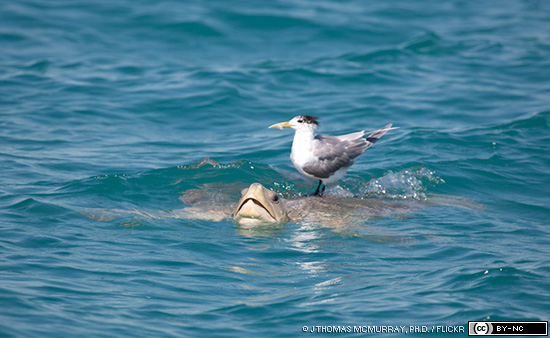 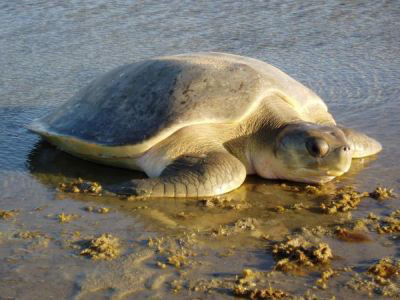 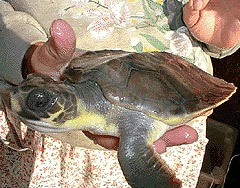 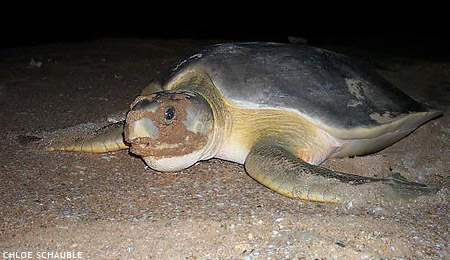 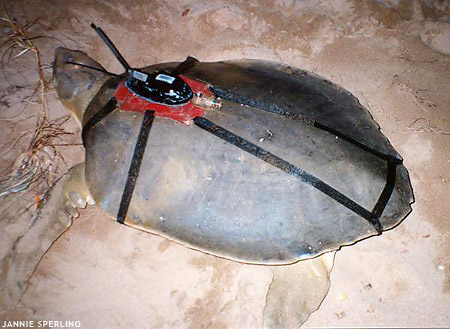 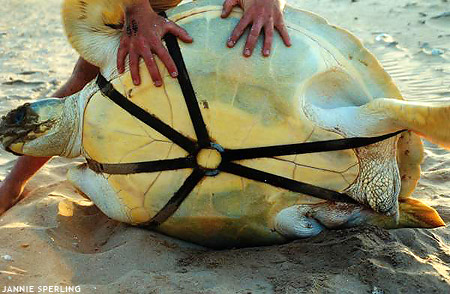 Flatback sea turtles, Natator depressus (Garman, 1880), aka Australian flatbacks, are named for their flattened carapace (shell). Synonym: Natator depressa. The flatback’s olive gray shell is elliptical in shape with upturned edges. The ventral (under) side, or plastron, is pale yellow. Their shell measures between 102-125 cm long, and these turtles weigh about 84 kg. The flatback’s smooth, waxy shell is quite thin and easily damaged. Australian flatbacks are medium-sized turtles.

Sea turtles are some of the largest and most endangered turtles in the world and live in almost every ocean of the world. Their smooth shells and paddlelike flippers help them speed through the water as fast as 24 kph. These long-distance travelers have been known to swim up to 4,828 km.


Flatbacks are unique in many ways including their choice of habitat. Instead of clear, coastal waters, flatbacks live in turbid, inshore waters.

Flatback sea turtles are indigenous to Australian waters and are not found anywhere else in the world. They inhabit the coastal waters of Western, Northern and Eastern Australia.

Like many sea turtles, flatbacks have a varied diet that includes squid, sea cucumbers, soft corals, and a variety of mollusks.

Although sea turtles move swiftly in the ocean, they are slow and defenseless on land. Male sea turtles almost never leave the water. Female sea turtles leave the ocean only to lay eggs and, for most species, nest only at night. A female may nest every two to three years.

Nesting can take between one and three hours. After a female turtle drags herself up the beach, she hollows out a pit with her back legs and deposits from fifty to two hundred eggs the size of golf balls. When the last egg is laid, the turtle covers the eggs with sand, tamps down the sand with her plastron, and flings more sand about with her flippers to erase any signs of the nest.

Nesting for flatbacks takes place in November and December (Australia’s summer) on steep, sloping beaches and sand dunes along the northeast coast of Australia. Females lay about four times per season. The eggs hatch in 47-58 days. When the hatchlings emerge, they are larger than most species. They also reach sexual maturity earlier than other turtles. This may be a result of their high protein diet.

Flatback sea turtles are preyed upon by saltwater crocodiles, dingos, foxes, rats, and monitor lizards attack hatchlings. Inshore, herons and sea eagles are known to prey upon them as well.