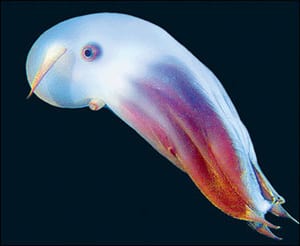 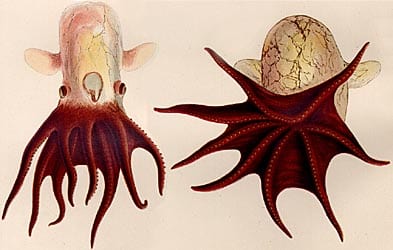 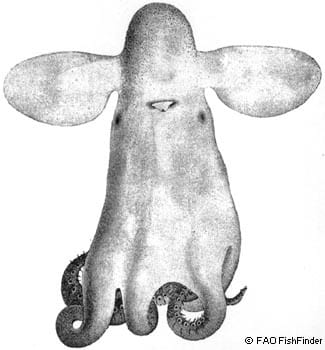 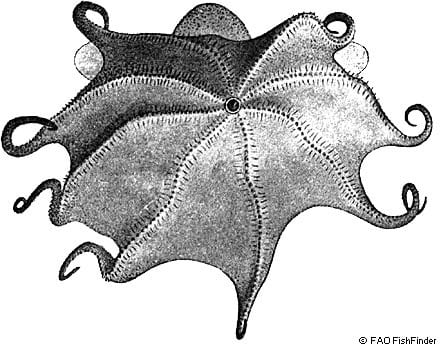 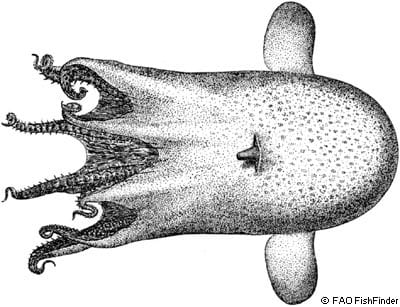 Grimpoteuthis octopuses are part of the Cirrina suborder. Cirrates differ from other octopuses by generally having abandoned jet propulsion, relying on their fins as their primary mode of locomotion. Their two large fins are also supported by an internal shell (another aspect that differs from other octopuses, who generally have no shells of any kind). Their arms are webbed, often with their webbing reaching to the tips of their arms. Suckers are present in a single row along the length of each arm, as well as cirri (fleshy papillae or nipple-like structures along the bottom edges of the arms, see the cephalopod glossary for more details), generally two per sucker. Ink sacs and anal flaps are generally absent. Ink sacs are organs composed of a gland that secretes ink, a sac that stores ink, and a duct that connects it to the rectum. The ink sac generally appears black from the outside although it may be covered by silvery tissue in some species.

The 17 currently known species of dumbo octopuses are:

Grimpoteuthis are in the family Opisthoteuthidae (umbrella octopuses) and have short, squat, semi-gelatinous bodies with an internal U or V-shaped cartilaginous shell. They lack the secondary web (the web which extends from each arm to the primary web) and longer cirri found in the family Cirroteuthidae and their eyes are much more developed. They can grow up to about 20 cm in length. Species in the Opisthoteuthidae family have suckers without tooth-like structures. Their radula (a chitinous, ribbon-like band in the mouth of cephalopods that contains up to seven transverse rows of teeth that aid in the break up and transport of food into their esophagus for swallowing) in Opisthoteuthidae tends to be reduced or completely absent, as most species swallow their prey whole.

Grimpoteuthis are benthic creatures, living basically at the bottom of the ocean at depths of around 3,000-4,000 m (the average ocean depth is 3,790 m). Some species alternate between sitting on the ocean floor and swimming above it (benthopelagic). Others are known to be completely pelagic.

Four modes of active locomotion have been observed in dumbo octopuses: crawling, take-off, fin swimming and pumping and one passive mode called umbrella-style drifting. Fin swimming is the mode of locomotion that is most often observed, wherein they use their fins to drift through the water. Grimpoteuthis is known to be neutrally buoyant, which allows the animal to drift passively with its fins expanded. The take-off mode is a sudden, single contraction of the brachial crown (the arms and tentacles surrounding the mouth) and surrounding web. Pumping is a slow mode of locomotion which involves peristaltic waves, which are symmetrical contractions of muscles, in their primary and intermediary webs.

Species of this family are believed to exist on the deep ocean floor in all oceans of the world. Specific species have been found in the waters surrounding New Zealand, Australia, Monterey Bay, Oregon, Philippines, Martha’s Vineyard, Papua, New Guinea and the Azores.

Little is known about the behavior and habits of Grimpoteuthis. They feed on worms, bivalves, copepods and crustaceans.

Each sucker has a pair of cirri, which are thought to have some role in feeding, perhaps by creating currents of water that help bring food closer to their mouth or beak.

Little is known about Grimpoteuthis reproduction. The male reproductive tract shows considerable variation between species, and thus there is significant confusion in the identification of certain parts.

In the family Opisthoteuthidae, of which the Grimpoteuthis is a part of, a hectocotylus is absent, but some species exhibit other forms of sexual modification; enlarged suckers being the most common modification. The spermatophores of octopuses in this family have lost their ejaculatory apparatus and form sperm packets with an operculum. The sperm packets are transferred to the female’s mantle cavity. The eggs of this family are very large, and covered with a tough casing which is secreted by the oviducal gland and hardens in seawater. Eggs are individually laid directly on the ocean floor, on the undersides of rocks or shells. The ovaries of these octopuses contain eggs at different stages, implying that they breed continually instead of having a distinct breeding season.

Dumbo octopuses, Grimpoteuthis, are not yet known to be under any threats and are not dangerous to humans.