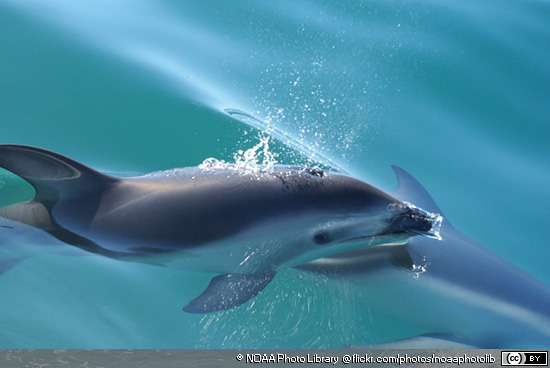 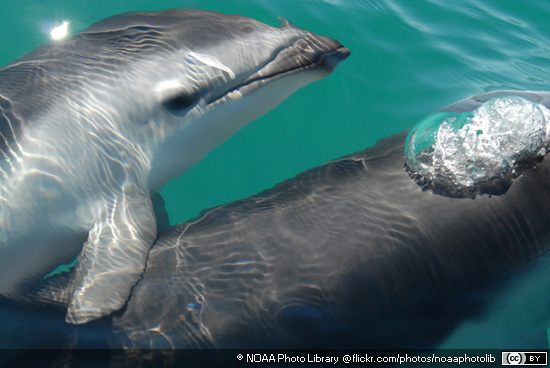 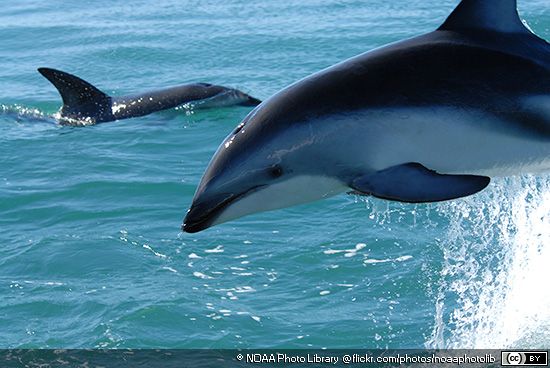 Dusky dolphins, Lagenorhynchus obscurus (Gray, 1828), are small cetaceans that reaches about 2 m in length, and weighs 100 kg or less. Their heads slope down from their blowhole to their snouts that do not have a prominent beak. The tips of their snouts and lower jaws are dark in color with a gray marking extending from their eyes to their flippers. Their dorsal fins are blunt and relatively straight. Dusky dolphins are dark blue-black in color on their tails and dorsal (upper) sides. They also have a dark band running diagonally across their flanks from their dorsal fins to their tailstocks. They also have 2 white streaks that run diagonally from their tails to the base of their dorsal fins. Their ventral (under) sides are light gray to white in color which extends up their flanks a bit.

There are three subspecies of dusky dolphins, Lagenorhynchus obscurus:

Dusky dolphins are a curious species; they favor bow riding and seem to enjoy contact with boats and people. They are extremely agile swimmers and are known for their acrobatics.

This gregarious species is also known to associate with other cetaceans. Their own group sizes vary according to the time of year, with larger numbers living together during the summer and in winter, small groups of about 20 individuals are common. In Argentina, dusky dolphins form schools of varying sizes with a range of 2-500 individuals. The average group size is around 100 dolphins. Interestingly, stable subgroups within a larger school have been observed indicating close inter-school relationships.

Part of the reason for this schooling behavior is that larger groups are better able to herd schools of small fish, such as anchovies in Argentina, for feeding. During feedings, a small group of 8-10 dolphins may increase in size to 200 or more. Following feeding, social and sexual activity among dusky dolphins tends to increase. During daylight hours, Argentinean dusky dolphins rest near shore in smaller groups.

School size of dusky dolphins in New Zealand also varies. Generally, they are known to form large, widespread schools consisting of scattered, smaller, more intimate groups of about 10 individuals. The dolphins search for food as one widespread unit and, like their Argentinean cousins, also rest near shore in small groups during the day. School sizes in New Zealand range between 2-1,000, and also vary seasonally, forming larger groups during the warmer winter months.

Dive times for dusky dolphins in Argentina average about 20 seconds, longer dives, likely feeding dives, have been recorded at >90 seconds. Dusky dolphins have been observed diving in groups as well as individually.

Dusky dolphins are found throughout the southern hemisphere. Scientists have recommended that dusky dolphins be classified into regional subspecies because of the differences between populations in Africa, New Zealand, and South America.

In Africa, dusky dolphins are found off the coast of Angola and further south. In South America, they can be found from La Lucila del Mar, north of Buenos Aires Province (36°19’S) south to Cape Horn at at Bahia Nassau (55°26’S, 67°18’W). The dusky dolphin is the most common dolphin species found on the Patagonian Shelf.

In New Zealand, Lagenorhynchus obscurus is found from the North Island south to Stewart Island and off the coasts of Auckland, Campbell, and Chatham Islands.

There have been rare sightings off the eastern coast of Tasmania suggesting that dusky dolphins may also be present off the coast of Australia.

This species tends to live near the continental shelf in cooler waters with sea surface temperatures between 10°C-18°C. Off the coast of Argentina, dusky dolphins tend to stay near shallower waters <200 m deep.

The Argentinean and New Zealand populations have shown inshore-offshore movements both daily and seasonally. In Argentina, larger numbers are observed inshore during summer months, however they are also found in deeper offshore waters during summer. This may be related to the movement of their prey, the southern anchovy.

In New Zealand, near South Island, schools travel as a unit covering several square kilometers in one day. In summer, they migrate from inshore to offshore waters to feed on pelagic fishes; in winter they remain closer to shore. Dusky dolphins may cover greater distances during seasonal migrations, and tagged dolphins have been recorded traveling up to 20 km away from the point of origin in one day and up to 35 km over 5 days.

Off South America, dusky dolphins, Lagenorhynchus obscurus, feed on southern anchovy, squid and lanternfishes. Other prey found in the stomachs of dusky dolphins include horse mackerel, hake, and sardines.

Stomach contents of dusky dolphins in New Zealand revealed a diet of Hoki and squid.

Dusky dolphins, Lagenorhynchus obscurus, are thought to give birth during warmer months from November to February. In Peruvian waters, births were recorded during late winter between August-October.

Dusky dolphins, Lagenorhynchus obscurus, are caught in fishing nets and with harpoons both incidentally and commercially. Large catches of small cetaceans have been reported in Peru. Between 1991-1993 an estimated 7,000 dusky dolphins were captured each year. In more recent years, dolphin hunting has been banned and populations have decreased making large catches no longer feasible. In New Zealand dusky dolphins are entangled in gillnets with a reported mortality rate from one port between 100-200 animals each year. The shrimp industry near Patagonia causes high levels of bycatch because of mid-water ocean trawling. Fortunately, this fishery has declined in recent years.

In Central Peru, 722 cetaceans were captured in gillnets in 1994, 82.7% of which were dusky dolphins. Data on the fishing impact on dusky dolphin populations are needed though currently unavailable.