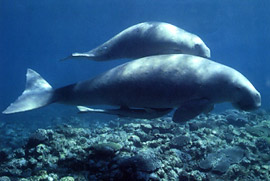 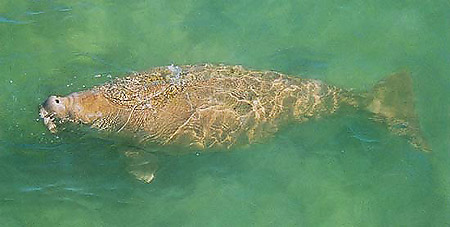 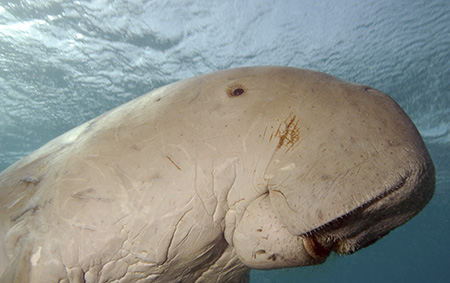 Dugongs, Dugong dugon (Müller, 1776), aka sea cows, range in length from 2.4-4 m. Sexual dimorphism is either absent or females may slightly outsize males and can weigh over 270 kg.

Dugongs are born a pale cream color, but they darken with age to a deep slate gray dorsally and laterally. Short hair is sparsely distributed over the body, save the bristles on the muzzle. The skin is thick, tough and smooth.

Their front limbs have evolved into flippers that are 35-45 cm long. These are used for propulsion by the young, but the adults use their fluke-like tail for locomotion, using their flippers for steering.

Their muscular upper lip is cleft and protrudes over their down-turned mouth. Their premaxilla is enlarged and downturned, their nasal bones are absent, their braincase is small, and their zygomatic arch (cheek bone) is thick and deep. The bones of their skeleton are pachyostotic (extremely thickened and dense).

Although superficially they resemble whales, sirenians have evolved independently. They are thought to be descended from the group of ancient land mammals that also gave rise to the elephants.

Pacific Ocean, Indian Ocean: dugongs are found discontinuously in coastal waters of east Africa from the Red Sea to northernmost South Africa, northeastern India, along the Malay peninsula, around the northern coast of Australia to New Guinea and many of the island groups of the South Pacific. The dugong’s range was much greater in the past.

Dugongs are long-lived marine mammals with life spans of up to 70 years and a minimum pre-reproductive period of 9-10 years, though it can occur as late as 15 years and an estimated mean calving interval of 3-7 years.

Breeding occurs throughout the year and peak months for birth vary geographically. The exact length of gestation is unknown, but it is presumed to be about 1 year. Single calves are the norm and twins are rare. Parturition (the birth process) takes place in shallow water and newborn calves are able to swim immediately to the surface for their first breath of air. Newborn calves are about 100-120 cm long and weigh 20-35 kg. Young may remain with the mother for a year.

The slow-moving herbivores are rebounding in Australia thanks to an abundance of seagrass.

Dugongs are hunted throughout their range for meat. They are also hunted for oil, hides for leather, and for their bones and teeth, which are made into ivory artifacts and charcoal for sugar refining. Some Asian cultures prize dugong products for “medicinal” purposes.

Has been heavily exploited in the Philippines, almost to extinction.

Dugongs have a good fossil record going back to Eocene terrestrial ancestors.

The dugong, Dugong dugon, is listed as Vulnerable (VU A2bcd) with the IUCN Red List of Threatened Species: