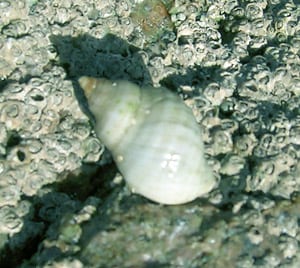 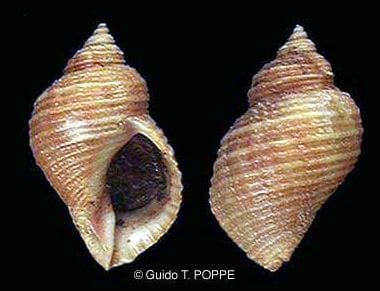 Dogwhelks, Nucella lapillus (Linnaeus, 1758), also called Atlantic dogwinkles, are an intertidal snail with a solid, conical shaped shell. They generally have about six swollen whorls. Their shell is usually about 3 cm high and 2 cm wide, but may grow up to 6 cm in height. They are usually white, but may also be yellow, brown or gray, and they sometimes have bands of alternating colors.

The morphology of Nucella lapillus varies depending on shore type. Individuals found on sheltered shores usually have thicker shells, reflecting the need for greater protection needed from the large number of predatory crabs present.

Individuals on exposed shores usually have a thinner shell, as predator density is low, and a wide aperture to make room for a large foot needed for attachment in the rough conditions.

Remarkably, dogwhelks from different types of shores have different numbers of chromosomes, even though they are members of the same species, and can interbreed. Individuals in the same population have even been known to exhibit variation in chromosome number.


Dogwhelks, Nucella lapillus, are common on the rocky coasts of the North Atlantic, from Long Island north to Greenland in the west, and from southern Portugal north to Iceland, Greenland, Scandinavia and into the Siberian arctic on the eastern side. They are found on exposed shores and sheltered shores, and in sea lakes, estuaries, enclosed coasts, sounds and rias. They are found throughout the littoral zone and can survive under all types of tidal strength and wave exposure. Nucella lapillus does not migrate.

Dogwhelks, Nucella lapillus, feed mostly on barnacles and mussels. They may also feed on cockles, other gastropods and assorted bivalves. They possesses a radula, a toothed appendage for removing flesh, and a mouth on an extensible proboscis.

Nucella feeds either by inserting the proboscis between the shells of bivalves or plates of barnacles and using the radula to rasp flesh, or by drilling a small hole in the shell of it’s prey through which it inserts its proboscis.

Nucella releases digestive enzymes into its prey, liquidizing it, and then sucking up the “soup.”

Feeding is affected by shore type, with individuals on more exposed shores feeding less than those on sheltered shores.

In the dogwhelk, Nucella lapillus, male and female individuals are separate. They are oviparous, meaning they lay eggs in which the embryos develops outside the mother’s body. Fertilization is internal.

The dogwhelk has been seriously impacted by the use of tributyltin (TBT) as an antifouling paint on boats. TBT has caused imposex (development of a false penis in females), infertility and local extinctions.

Stricter regulations in many countries have led to local recoveries, and recolonization and recovery of genetic diversity have been unexpectedly rapid considering the animal’s slow natural dispersal.