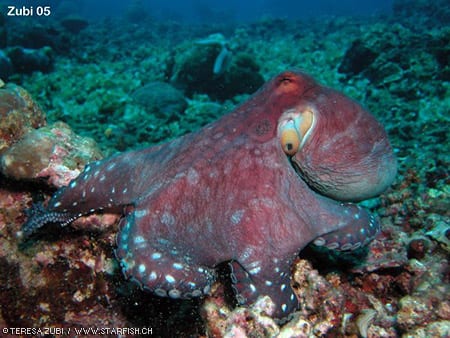 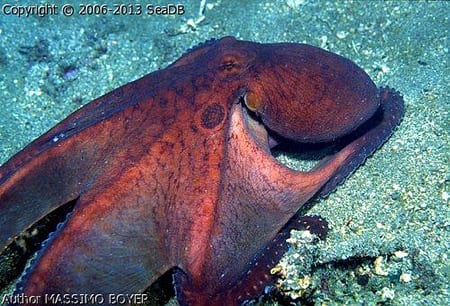 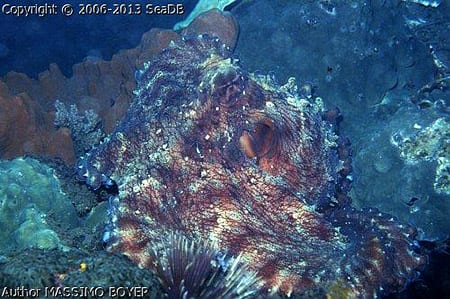 Reef octopus and day octopuses in the Ocean Channel

Day octopuses, Octopus cyanea (Gray, 1849), aka Cyane’s octopus or big blue octopuses, are large octopuses, with bodies to at least 16 cm and arms to at least 80 cm. They are typically brown in color but have the ability to rapidly change color and skin texture. These octopuses are characterized by dark oval false eye-spots with no iridescent rings that are commonly present at the base of their arms and dark brown coloring on the tips of their arms along with 2 rows of lighter spots. The dark eye-spots are only sometimes visible and depends upon the patterns being displayed by individual octopuses.

Because this species feeds during daylight hours, its ability to camouflage are exceptional. The day octopus can produce a variety of color patterns and elaborate skin textures that resemble the ocean substrate around them making them virtually invisible to predators. Their complex brain sends nervous impulses to their muscles causing them to change almost instantly as they move over sand, coral, rubble and other surfaces. One day octopus was observed by octopus biologist Roger Hanlon changing patterns 1,000 times over a 7 hour period off the coast of Hawaii.


Day octopuses, Octopus cyanea, are a common octopus found throughout the Indo-Pacific region, off eastern Africa and the Red Sea to the Hawaiian Islands. This octopus excavates lairs in coral reefs and associated rubble which can be located by identifying “middens” outside their lair entrance which are typically the empty shells of bivalves (clams, etc.) and crabs which it has preyed upon.

Courtship behavior of the day octopus begins as the male displays coloring of dark brown with white spots and slowly approaches the female, who is typically in full camouflage. Males have a long modified third right arm that they hold in an upright coiled position and wave toward the female. If the female is receptive to the signaling male, he inserts his arm into the female’s oviducts to pass her spermatophores. The male may keep his distance to avoid the risk of being eaten by the female, a behavior that has been observed in the wild after mating.

After fertilization she attaches hundreds of thousands of small eggs to hard a substrate inside her lair. The eggs hatch into planktonic juveniles that feed on zooplankton during the early stages of development.

This species is not yet listed as threatened or endangered and is not considered dangerous to humans. The day octopus is fished locally throughout its range using a variety of fishing methods including lures, baited lines, traps, spears, and by hand. The species is reportedly exported by Indonesia.