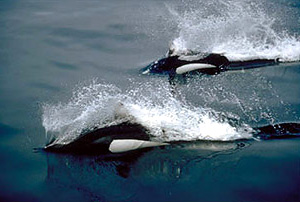 Dall’s porpoises, Phocoenoides dalli (True, 1885), are robust (particularly males) and muscular cetaceans with relatively small heads that slope steeply to short indistinct beaks. In spite of their stocky body, they are a relatively small porpoise that average only 1.8 m in length for males with a maximum length of 2.29 m. Females average 1.8 m in length with a maximum length of 2.1 m. Their weight averages 123 kg for both males and females with a possible maximum weight of about 160 kg.

They have a hump on their dorsal (upper) side and another hump, more prominent in males, found in front of their flukes (tails) on their ventral (under) sides.

Their dorsal fins are located slightly forward of the center of their body and are triangular in shape. Their small flippers are rounded at their tips, and their small flukes are pointed with a slight notch in the middle.

These porpoises are black on their dorsal (upper) sides with oval-shaped white markings along their flanks and white on their ventral (under) sides. Their flukes (tails) are bordered by a band of white and their dorsal fins also have white markings of various shapes, although they can be solid black or white.

There are two subspecies of Dall’s porpoise, Phocoenoides dalli:

Dall’s porpoises are extremely fast swimmers reaching speeds of up to 30 knots. They enjoy bow riding and they create a bow wave of their own known as a “rooster tail,” which creates a hollow airspace in the water that allows the porpoise to continue breathing while swimming. In spite of their tendency to bow ride, this species can also be elusive when it comes to human interaction. They are typically found in groups of 10-20 individuals, but groups of up to 200 have been observed feeding. They often associate with Pacific white-sided dolphins and pilot whales.


Dall’s porpoises, Phocoenoides dalli, are limited to the North Pacific, ranging from Baja California north to Alaska and the Bering Sea and across into Japanese waters. The tend to prefer colder waters with temperatures of less than 15°C. Many are year-round residents throughout their range.

Dall’s porpoises, Phocoenoides dalli, feed on squid in some parts of their range, but in other areas they feed on small schooling fishes such as capelin, herring, and sardines. Deep-water species such as hake and deep-sea smelt are also prey of Dall’s porpoise in some areas. In the northwest Pacific they feed primarily on lanternfish. They are known to consume about 12.7-13.6 kg of food daily, primarily at night.

Dall’s porpoises, Phocoenoides dalli, reach sexual maturity at about 1.9 m or at 8 years of age for males and about 1.7 m or 7 years for females. Calving takes place primarily in summer, although births in U.S. coastal populations occur year-round. Gestation is between 10-12 months and calves are born averaging 1 m in length and weighing about 25 kg. They are nursed for 2 years. The calving interval for females is around 3 years. Life expectancy for Dall’s porpoises is estimated to be less than 20 years.

Dall’s porpoises, Phocoenoides dalli, are still abundant throughout their range; however in Japan, large numbers are caught in gillnet fisheries and coastal whaling operations. They are threatened by the Japanese high seas salmon fishery, where as many as 8,000-10,000 porpoises die as bycatch during the 2-month fishing season. Although Dall’s porpoises do not feed on salmon, it is thought that they become entangled while feeding on deep-sea species that come to the surface at night. It has also been suggested that the plastic and nylon netting used in the salmon fisheries is not detected by Dall’s porpoise sonar. Unfortunately, the majority caught are females, many of which are pregnant or nursing. Efforts are underway to protect Dall’s porpoises, an important endeavor given the extent of the fishing industry in their range.