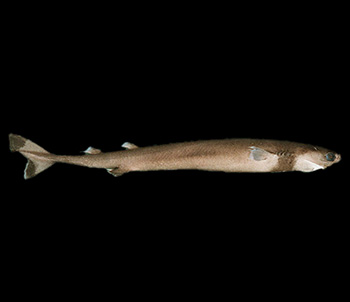 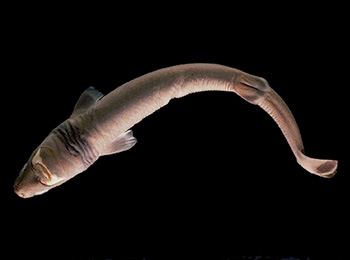 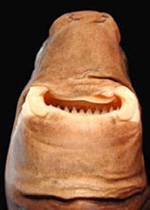 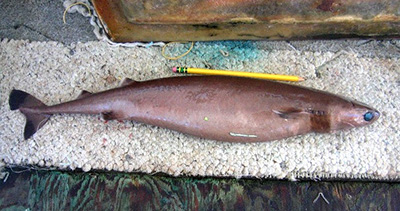 Cookiecutters have cylindrical bodies that reach up to 50 cm in length. They have conical snouts and 2 low spineless dorsal fins positioned at the posterior (rear) end of their bodies. They are dark brown to black on their dorsal (upper) side, lighter ventrally (below/underneath), and possess a dark collar around their gill regions. The entire ventral surface, with the exception of their dark collar, is covered in a dense network of tiny photophores which emit a greenish glow (bioluminescence). This glow is reported to last as long as three hours after the shark’s death.

There is a second species of cookiecutter shark, Isistius plutodus, which is commonly known as the large-tooth cookiecutter shark. Although it also grows to about the same length, it has even larger lower teeth for which it’s named.

Cookiecutter sharks live in the warm, deep waters of equatorial oceans, primarily in coastal waters near islands. They inhabit deep waters below 1,000 m during the day and migrate into surface waters at night at around 300 m. They have been found in depths up to 3,500 m.

Cookiecutter sharks, appear to blend with the light from above when viewed from below due to the shark’s ventral photophores that disguise the shark’s outline. The primary prey of the cookiecutter shark are squid, small fish (like bristlemouths), and crustaceans.

This shark also feeds on larger pelagic animals such as wahoo, tuna, billfishes, and marine mammals. It is a facultative ectoparasite, which means that it feeds on the flesh of other species causing them harm but not death and it is not dependent on these species for survival.

A dark patch on the ventral surface of the cookiecutter shark resembles a smaller fish when viewed from below and is thought to lure larger fish and marine mammals that may be swimming beneath it. When this sneaky predator attacks its prey, it grabs hold of the flesh with its lips and bites using its small, sharp upper teeth to grip the prey while it cuts the flesh with the large, serrated lower teeth. The cookiecutter shark then spins its body to remove a “cookie-shaped” plug of flesh which it swallows before releasing its prey.

Unlike other shark species that lose teeth individually, the teeth of the cookiecutter shark are shed as a single unit. The bottom teeth are swallowed, possibly to help maintain calcium levels in the body.

Cookiecutter sharks are ovoviviparous. Hatching takes places between 12-22 months with 6-12 pups per litter. When the young emerge, they are fully developed and able to hunt for food by themselves. Males mature at 36 cm and can grow to a size of 42 cm. Females mature at 39 cm and can reach up to 56 cm.

The cookiecutter shark has been reported to also attack the rubber sonar domes of submarines. Due to its deep sea habitat and small size, it is no danger to humans.