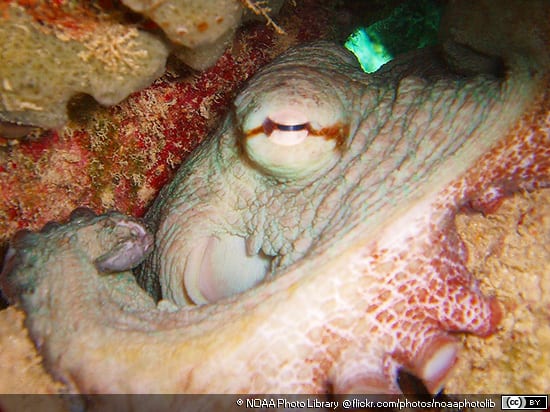 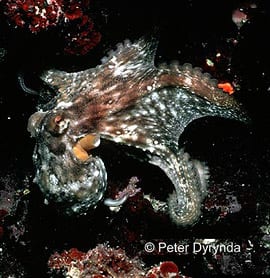 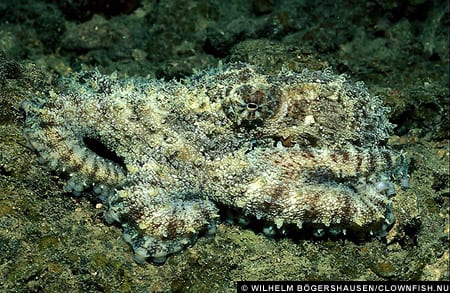 Common octopuses, Octopus vulgaris (Cuvier, 1797), reach between 30-91 cms in length and, like other octopus species, they have eight arms with numerous suckers and no internal shell. It is thought that this species has a number of subspecies, but they have not yet been taxonomically classified.

Octopus vulgaris are found worldwide in tropical and temperate waters. They are abundant in the Mediterranean Sea, off the coast of Japan, and in the Eastern Atlantic in coastal waters between 1-200 m.
https://www.youtube.com/watch?v=JSq8nghQZqA

Common octopuses, like other octopus species, discard the remains of their bivalve and crustacean prey just outside their lairs into piles called middens. These piles have proven useful to scientists to study the feeding habits of the common octopus. The piles also make it easier to spot an octopus lair and therefore perhaps an octopus.

Common octopuses lay about 100,000-500,000 eggs, each about the size of a grain of rice, during each breeding cycle that hatch and live in the plankton for 1.5-2 months. The juveniles that don’t get eaten as part of the planktonic food web can live for up to 1.5 years.

Octopus vulgaris is one of the most common octopus species commercially fished for food and for the aquarium trade. Between 10,000 and 20,000 metric tons of common octopuses are caught by commercial fisheries yearly using unbaited octopus pots. The empty pots are simply used to attract unsuspecting octopuses as seemingly safe havens.