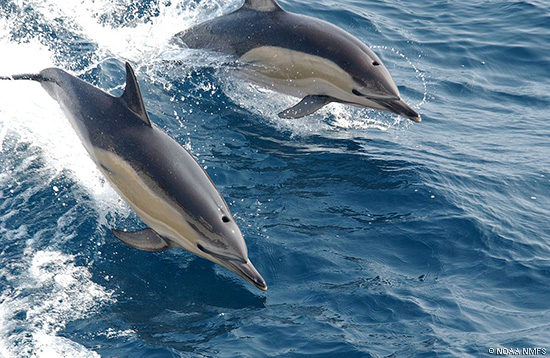 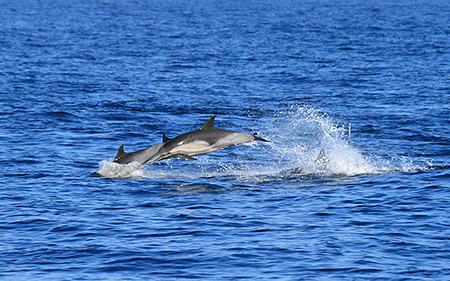 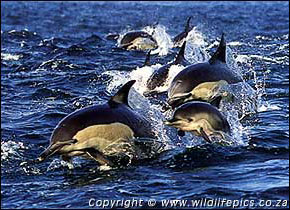 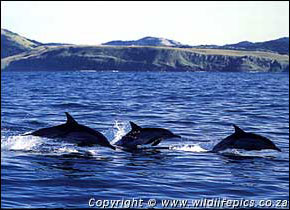 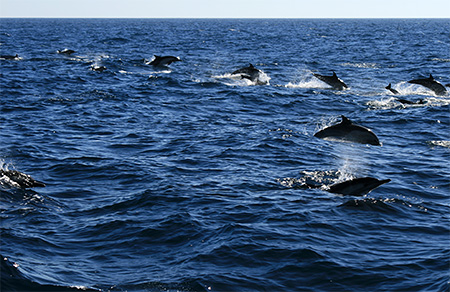 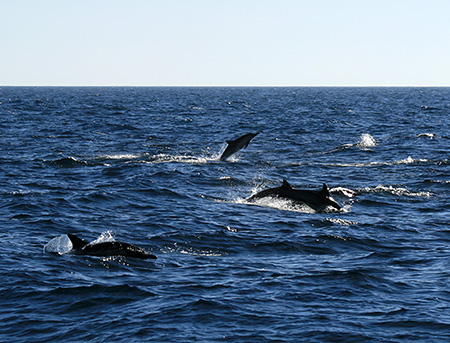 Common dolphins are typically 1.7-2.6 m in length and weigh between 70-135 kg. They are fusiform (shaped like a fish) and slender. Their dorsal (upper or top side) side is black to brownish black, with varying coloration and markings. The ventral (under) side is offwhite or white. The flanks are distinctly marked with hourglass or criss-cross patterns that tan or yellowish tan in color. Their short beak is well-defined and often features a white tip. One or more dark stripes are found from the center of the lower jaw to the flippers. Their dorsal fin is triangular to distinctly falcate (curved) in shape with a pointed tip and usually black with a lighter gray region of varying size near the middle.

These amazing animals are very social and often travel in enormous pods of more than a thousand. They’re known for their high leaps out of the water, sometimes simultaneously in groups, and they enjoy riding the bow waves of boats for long periods of time. They are a very energetic and highly vocal species that produce a variety of whistles, pulses, and clicks that are easily heard by divers.

Common dolphins, Delphinus delphus, are found worldwide in the Atlantic from Iceland to South Africa (including the Gulf of Mexico and Caribbean Sea) and in the Pacific from Victoria, British Columbia to Tasmania, Australia. They have also been sighted in the Indian Ocean and the Mediterranean, Black and Red Seas as well as in the Persian Gulf. They frequent offshore waters around outer continental shelves, often near ridges. They’re rarely sighted near shore.

These species are the target of fisheries in Japan, South America, and the Azores. “Accidental” catches in fishing gear occur in the eastern tropical Pacific, the Mediterranean, Europe, China, Sri Lanka, South Africa, West Africa, and New Zealand. Common dolphins are the third most frequently caught dolphin in this manner. Despite their active and social behavior in the wild, common dolphins are shy, easily agitated, and prone to illness when kept in captivity.