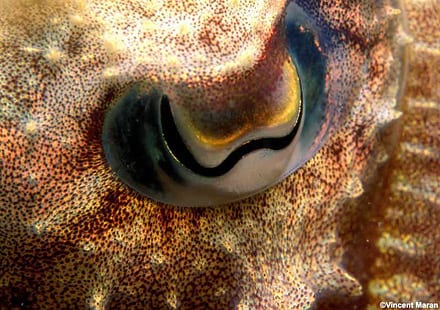 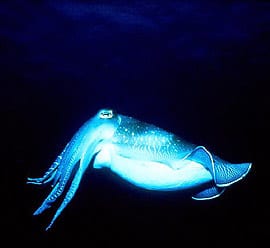 The amazing European or common cuttlefish, Sepia officinalis (Linnaeus, 1758), reaches a maximum mantle length of 45 cm, although one individual has been recorded at 60 cm. Their mantle (the main body region above their eyes) houses their cuttlebone, reproductive organs, and digestive organs. A pair of flat fins span the entire length of their mantles, which they undulate rapidly when swimming. Their head is located at the base of their mantle, with two large eyes on either side and sharp beak-like jaws in the center of their arms. They have eight arms and two longer tentacles for capturing prey that can be retracted completely into the body. Adults can be recognized by their white lines branching from the base of their flared third arms.

The basic coloring of common cuttlefishes varies, although they typically display a mottled black or brown color. Color changes are possible due to three types of structures contained within its skin, called chromatophores, leucophores and iridophores, which are small structures filled with colored ink which can be expanded and contracted to communicate with others or that can form patterns and textures used as camouflage, often mimicking the surrounding landscape. These structures basically allow cuttlefishes to reflect a myriad of colors, and even change the textures of their skin.

The name Sepia refers to the type of ink they house within their bodies. This ink is used to deceive large predators when they try to attack cuttlefishes. When a predator is near, they shoot their ink into the water to confuse the predator, while they jet (hopefully) to safety.

Cuttlefish (Sepiida) are in an Order of mollusks that possess an internal shell called the cuttlebone. The cuttlebone is made of calcium carbonate and plays a dominant role in these mollusks’ buoyancy; it is divided into tiny chambers in which the cuttlefish can fill or empty of gas, depending on its needs. They are in the Class Cephalopoda which is the group that contains cuttlefish, octopuses, squid, and nautiloids such as the chambered nautilus.

Common cuttlefishes, Sepia officinalis, are found in the Mediterranean, and North and Baltic Seas, although populations have been proposed to occur as far south as the South Africa. They are found in sublittoral depths (between the low tide line and the edge of the continental shelf, to about 100 fathoms or 200 m).

Common cuttlefishes, Sepia officinalis, are masters of disguise. Their highly specialized array of color-changing structures allow them to blend themselves perfectly into their backgrounds. This also lets them often sneak up on prey and then shoot out their tentacles (which have suckers on the widened pads at their tips) at lightning speed to capture them. They use their tentacles’ suckers to hold their prey while they bring it back towards their beak. Common cuttlefishes eat mainly crustaceans and small fishes. Cuttlefishes’ primary predators are typically larger fish like sharks, monkfish, and swordfish.

The reproductive cycles of cuttlefish occur year round, with spikes in mating during the months of March and June. Cuttlefish are dioecious, meaning they have separate male and female sexes. The males transfer sperm to the females via a hectocotylized arm (an arm modified for mating). Cuttlefish have large eggs, 6-9 mm in diameter, that are stored in the oviduct, which are then deposited in clumps on the bottom of the sea. The eggs are colored with ink, which helps them to better blend into the background. The young hatch with a nutritious yolk that will support them until they are able to secure food for themselves. They hatch at a much further developed stage than an octopus does and immediately start feeding on suitably small shrimps.

Many people would like to keep cuttlefish as pets. This is quite easy in the UK and Europe as species of cuttlefish like Sepia officinalis, the ‘European cuttlefish’, are found there.

In the US however, there are no naturally found species and the most commonly imported species is from Bali called Sepia bandensis which is a poor traveler and normally arrives as a four-inch adult with perhaps only weeks to live. They are not recommended as a pet. See TONMO.com for more information about keeping cuttlefish.