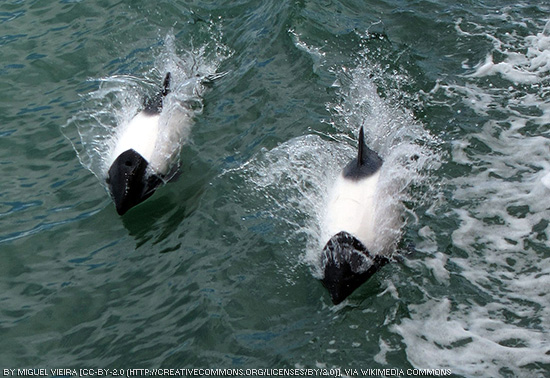 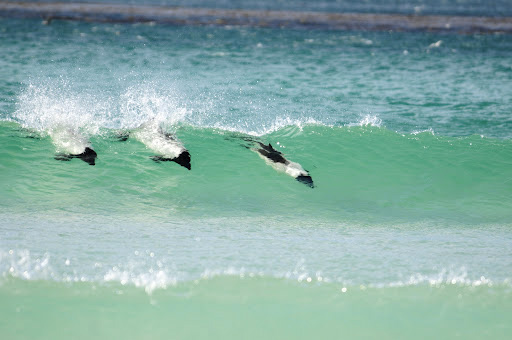 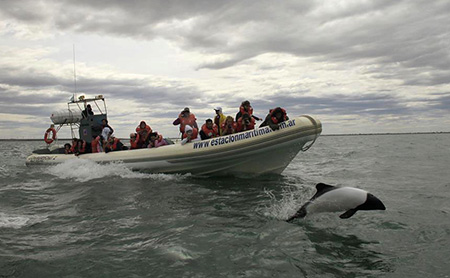 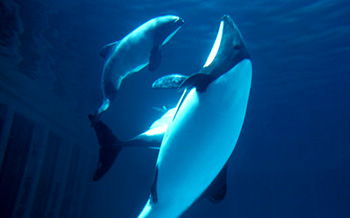 Commerson’s dolphins, Cephalorhynchus commersonii (Lacépède, 1804), aka piebald dolphins, are frequently mistaken for porpoises because they lack of beaks and have small heads. They have small stocky bodies with with rounded, paddle-like flippers. Juveniles are gray-black and lighten into their adult white coloring of the anterior body and black head. The dorsal area from the fin back is also black with a black patch on the lighter ventral side. Commerson’s dolphins range in size from 1.2-1.7 m, and can reach up to 86 kg.

The Kerguélen population in the southern Indian Ocean, east-southeast of South Africa, differ markedly from those in South America. They are larger and are black, gray, and white in color unlike the black/white coloration of the South American population.

There are two subspecies of Commerson’s dolphins:

These dolphins tend to be found in small groups of 1-3, although aggregations of 100 or more have been observed. Like other dolphin species, they are quick and agile, and enjoy leaping and riding bow waves. They have also been observed swimming upside down.

Commerson’s dolphins, Cephalorhynchus commersonii, range from the tip of South America, through the Strait of Magellan, around the Falkland Islands and the Kerguélen Islands. Little is known about the migratory patterns of these dolphins, however fishermen report that they disappear from their common areas during the winter. They may follow fish such as róbalo and merluza that migrate offshore in winter. The dolphin population in the Strait of Magellan decreases in late autumn. The South American and Kerguélen populations are 2 distinct populations separated by 130° of longitude, or 8,500 km. In the Kerguélen population, the majority of dolphins migrate out of the Golfe du Morbihan between June-December.

The northernmost limit of the South America population is documented on the Brazilian coast between 31-32°S. Range extends south into Drake Passage (61°50’S) as far as the South Shetland Islands. On the west coast of South America, specimens have been reported from Isla Chiloé, Chile.

Sightings are common around the the Golfe du Morbihan where the dolphins inhabit open waters, kelp-ringed coastlines and protected areas between islets.

Commerson’s dolphins’ breeding season is in the spring and summer, which runs from September to February. Little else is yet known about their reproductive habits.

In spite of negative human impacts on Commerson’s dolphin populations, Cephalorhynchus commersonii are the most abundant member of the genus Cephalorhynchus.

The status of the population at the Kerguélen Islands is unknown, although research on this population of Commerson’s dolphins is increasing. The largest group seen in the area were counted at about 100 dolphins near the edge of the continental shelf.

These dolphins are at-risk of environmental contamination as well. Low levels of chlorinated hydrocarbons (DDT, PCB and HCB) were found in the blubber of Kerguélen dolphins, which confirms the presence of serious toxins in waters far from the main sources of pollution. Despite contamination, these levels are 10-100 times less severe than those of cetaceans in the North Atlantic.

Small cetaceans in Argentina and Chile have been protected by regulations since the 1970s. Permits are required for taking these animals, however enforcement is difficult in southern Chile due to geography. No regulations exist in the Falkland/Malvinas Islands but conservation areas have been proposed to protect the habitat. Live-captures are banned in Argentina pending more information on the species. Despite these regulations, some Commerson’s dolphins have been captured live in recent years for aquariums; the species appears to have survived in captivity.