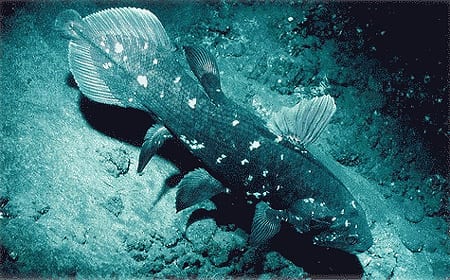 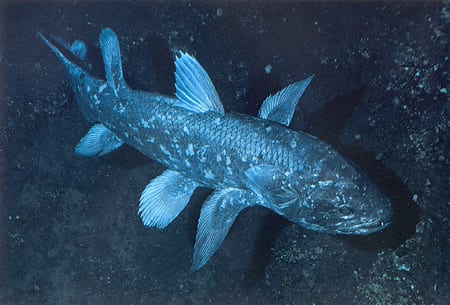 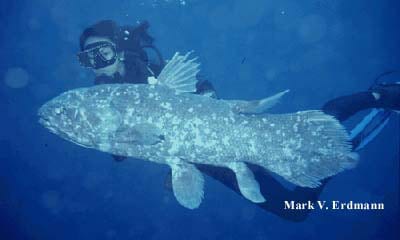 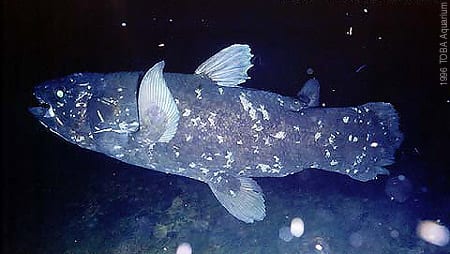 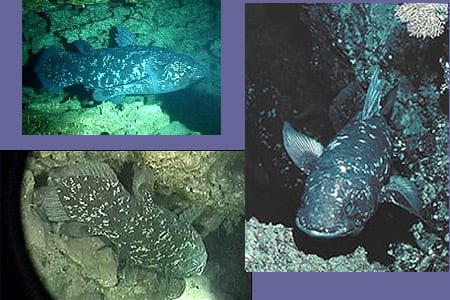 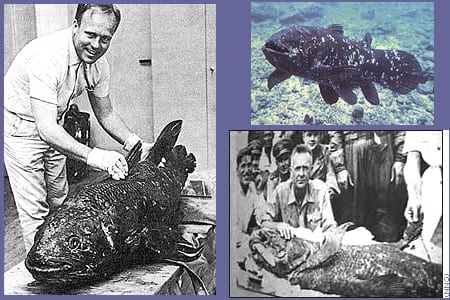 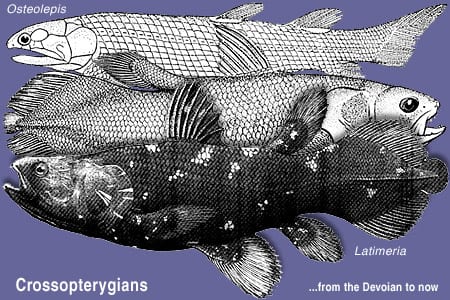 Latimeria chalumnae (Smith, 1939) is the West Indian Ocean or African coelacanth and Latimeria menadoensis (Pouyaud, Wirjoatmodjo, Rachmatika, Tjakrawidjaja, Hadiaty and Hadie, 1999) is known as the Indonesian coelacanth. The living coelacanths (“see-la-kanths”), Latimeria chalumnae and Latimeria menadoensis are possibly the sole remaining representatives of a once widespread family of Sarcopterygian (fleshy or lobed-finned) coelacanth fishes (more than 120 species are known from the fossil record). The coelacanths were thought to have gone extinct during the extinctions at the end of the Cretaceous, 65 million years ago.

Then one was netted by a fishing trawler off South Africa in 1938 – a catch that shook the scientific world and was widely regarded as the zoological find of the 20th century.

Today’s coelacanths can reach almost 2 m in length and weigh up to 68 kg, (a “giant” Mozambique female was 1.8 m long and 95 kg) but they are usually somewhat smaller, particularly the males, which average under 1.65 m. Coloration is dark blue with distinctive white flecks that can even be used by researchers to designate individuals. (Indonesian coelacanths, Latimeria menadoensis, tends to be more brown than blue). Latimeria has a single, large, elongated, pseudo-lung filled with fat, a virtually linear heart, shark-like intestines with a spiral valve, and an axial skeleton composed only of a hollow tube of cartilage called a notocord. They possess hinges in their skulls that allow then to consume large prey. Latimeria also has a special electroreceptive device called a rosteral organ in the front of the skull. They are also noted as particularly mucilaginous; not only do the scales exude mucus, but their bodies continually ooze a large quantity of oil. 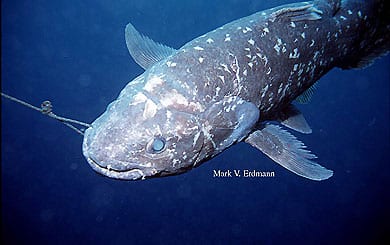 Scientists believe individual coelacanths may live as long as 60 years. The coelacanth appears to be a cousin of Eusthenopteron, the fish credited with growing legs and coming ashore – 360 million years ago – as the ancestor of all tetrapods (amphibians, reptiles and mammals) including ourselves.

Debate still rages though as to whether the coelacanths, presumed to be close relatives of the Rhipidistia fishes from which tetrapod amphibians supposedly arose, are our closest tetrapod ancestors, or if lungfishes, another very ancient line, are more closely related to tetrapods than the Rhipidistia. Coelacanths have a trilobated (three-lobed) tail with and extra trunk and fin protruding from the middle. While the living coelacanths retain many ancient features they have also, contrary to their public image, done some evolving along the way like producing live young. » Anatomy of the Coelacanth

Latimeria chalumnae, with their white scale flecks, set against a cobalt blue body color offer excellent camouflage against rocks covered with white sponges and oyster shells but Indonesian coelacanths are a brownish-gray.

Fish which had been tagged with sonic devices were found to leave the caves at the same time late each afternoon to forage along the coastal incline during the night.

They are opportunistic feeders, hunting cuttlefishes, squids, snipe eels, small sharks, and other fishes found in their deep reef and volcanic slope habitats. Location of prey fish is possibly aided by their rostral organ (in the snout) acting as an electric field receptor. Latimeria is also known to stand on its head, swims backwards and belly up to locate its prey presumably utilizing its rosteral gland. Scientists suspect that one reason Latimeria has been so successful (and also long-lived) is that they can slow down their metabolisms at any time, sinking into the less-inhabited depths and minimizing their nutritional requirements in a sort of hibernation mode.

They are ovoviparous, giving birth to as many as 26 live pups which develop from eggs in the oviduct, feeding off a large yolk sac until birth.

The Coelacanth – a Morphological Mixed Bag

Tanzania coast excites seekers of “living fossil” – Confirmed populations have been found off the island state of Comoros and South Africa but experts think the search of Africa’s long Indian Ocean coast has hardly begun. “Since August 2003, 17 coelacanths have been caught by fishermen off Tanzania,” said Tony Ribbink, the head of the African Coelacanth Ecosystem Programme (ACEP).