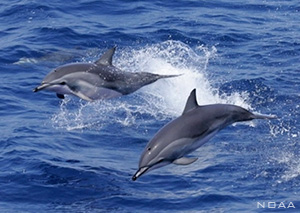 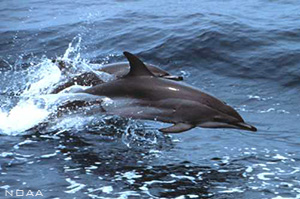 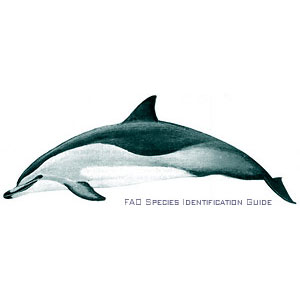 Clymene dolphins, Stenella clymene (Gray, 1846), aka short-snouted spinner dolphins, spinner dolphins (short-snouted), helmet dolphins, and Senegal dolphins, average 1.8 m in length and are light gray in color with darker markings above their eyes and below their dorsal fins. Their beaks are short with a dark line on top, and they also have distinct facial markings such as black eye rings and dark lips.

Clymene dolphins are known to ride bow waves and “spin”, however they are not as agile as other spinner dolphins except in the Gulf of Mexico where they have been observed displaying a similar agility to spinner dolphins.

Clymene dolphins, Stenella clymene, are found in tropical and subtropical waters of the Atlantic Ocean (eastern North America to West Africa), the Caribbean, and the Gulf of Mexico. In the United States they have been recorded as far north as New Jersey and as far west as Texas. Sightings in Brazil have also been reported.

They inhabit deep waters that are between 250-5,000 m, therefore sightings from shore are rare. These dolphins travel in pods that are often separated by gender. Clymene dolphins also often swim with other spinner dolphins and common dolphins, although the clymenes tend to remain separated even when swimming near other species.

Little information exists on the reproductive behavior of clymene dolphins however it is thought that their reproductive patterns are similar to those of other spinner dolphins.

Clymene dolphins, Stenella clymene, dolphins are occasionally harpooned in the Lesser Antilles (Caribbean) and captured in gillnets in Venezuela where they are used as shark bait for longline fisheries. They are also at-risk of being captured in tuna purse seines in the eastern Atlantic. Further research is needed on subpopulation structures, clymene dolphin abundance and fishing in West African waters, where bycatch has evolved into directed take.