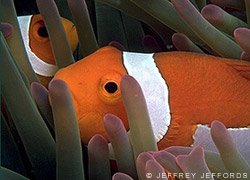 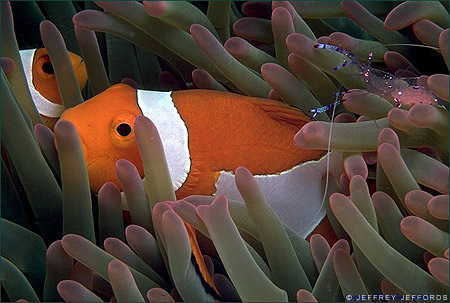 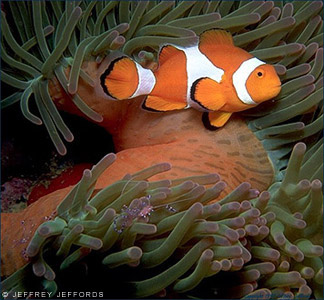 Clown anemonefishes, Amphiprion ocellaris (Cuvier, 1830), are aka Amphiprion bicolor (Castelnau, 1873), Amphiprion melanurus (Cuvier, 1830), common clownfishes, false clown anemonefishes, false anemonefishes and “Nemo” from the movie Finding Nemo. Color patterns are the most important features used to identify anemonefishes. These are normally bright orange with three white vertical bars, the middle one with a forward-projecting bulge; bars have narrow black margins. Maximum length about 11 cm. Similar species: A. percula (northern Queensland and Melanesia) is nearly identical, but has 10 (sometimes 9) dorsal spines compared to 11 (sometimes 10) in A. ocellaris; the spinous (anterior) part of the dorsal fin in A. ocellaris is taller (its height fits about 2.1-2.9 in the head length compared to 3.1-3.3 in A. percula). Distributions of these two species do not overlap.


Although many dive sites credit themselves with the highest concentration of anemonefish, Amphiprion, in the world (the Great Barrier Reef, Solitary Island, Australia, the Red Sea, Indonesia, Papua New Guinea, the Maldives, etc.), Indonesia has the highest number of species, while countries like Australia, which has 12 species, also has a number of unique variants. Most anemonefish can be found in shallow water reefs or sand from 1-18 m. Species like A. perideraion can be found in deeper water on shelves or drop-offs to about 35 m. Anemonefish are found in the Indian Ocean, Red Sea, South East Asia region, northern Australia, and the Western Pacific. They are not known to the Caribbean, Mediterranean or the Atlantic Ocean. Anemonefish have a special symbiotic (mutually beneficial) relationship with sea anemones. Normally, the nematocysts (stinging cells) of an anemone’s tentacles discharge when fish brush against the tentacles, paralyzing the fish. But anemonefish appear to be at home among the tentacles, even hiding among them as predators approach (see the videos for the twoband anemonefish for an example). There are many theories concerning the mechanism that makes this possible, but the most widely held view is that these fish have a special biochemical makeup in their mucus layer that provides protection from the stinging cells.

Host anemone species are typically Heteractis magnifica, Stichodactyla gigantea, and Stichodactyla mertensii. The anemonefish grooms its anemone host to keep it free of parasites and debris. There are conflicting reports about the protective relationship between anemonefish and their sticky hosts. One theory is that they chase off small creatures that prey on anemone, the other is that false clowns lure fish for the anemone to kill and eat. What is certain is that the rather clumsy anemonefish cannot live without their anemones. And without their clowns, some anemones are quickly destroyed by predators such as butterflyfish and sea turtles, which are immune to the anemone’s stings.

This is only one example of symbiosis, where two animals benefit by their close association.

There is a strong hierarchy within the groups of anemonefish inhabiting each anemone. Usually, a large female dominates. She mates only with the largest males. The female lays eggs in or near the anemone. If a suitable surface is not available, the female may even drag one near the anemone. This behavior allows anemonefish to be among the few reef fishes that have been successfully bred in captivity.

Some reef fish species are able to turn from females into males. This is actually a common ability. But anemonefish have the ability to sex-change from male to female (called Protandrous Hermaphroditism). All anemonefish are born male with active male and dormant female reproductive organs. If the female dies, then the dominant male will sex-change into a female, and a non-dominant male will change into a dominant male. This allows anemonefish inhabiting one anemone to remain self-sufficient in that if the female dies there is no need for the male to find a new mate. The responsibility for caring for the eggs then becomes the “new” female’s job.

Anemonefish care for their spawn by fanning the eggs with their fins, removing litter or dead eggs using their mouths with great precision, and keeping other fish away.

Both anemonefish and sea anemones can survive—apparently quite well—when separated from one another. However, oddly, if the separation lasts more than a few days or weeks, depending on the species of anemonefish, when the partners are reunited and the fish swims into the host’s tentacles it appears that it is no longer immune to the sting of the host anemone. Therefore, it appears that the immunity to the nematocysts of the anenmone is acquired. A stung anemonefish returns to its host repeatedly, going through an elaborate, stereotyped swimming dance, gingerly touching tentacles first to its ventral fins only, then to its entire belly. Finally, after a few minutes to several hours of such “acclimation” behavior, it is able to dive right in. Additionally, a fish that had been living alone before will feel the sting of an anemone hosting another anemonefish.

False clowns are also often found living in harmony with anemone shrimp (such as Ancylomenes holthuisi).

False clowns are bred artificially in Florida for the aquarium trade. Has been reared in captivity.