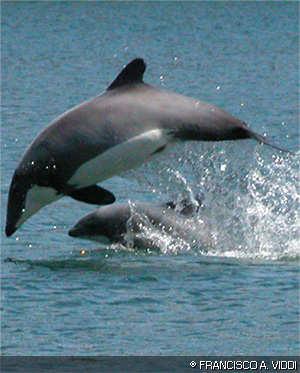 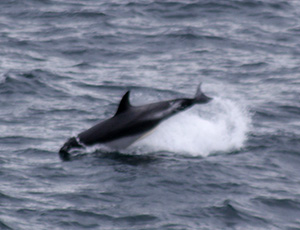 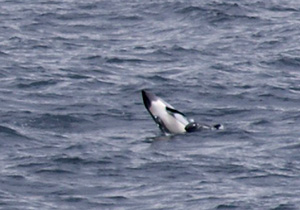 Chilean dolphins, Cephalorhynchus eutropia (Gray, 1846), aka white-bellied dolphin, black dolphin, and Chilean black dolphin, are small cetaceans with a stocky body shape and blunt beakless heads. They measure about 1.7 m long on average and reach 60 kg in weight. They have rounded flippers and a large rounded dorsal fin. Chilean dolphins are gray in color with lighter coloring on the ventral side. They have white markings on the lips, throat, forehead, and behind each flipper. A darker gray band covers the throat across the body.

It is thought that this is a gregarious species as they are commonly found in small groups from 2-10 dolphins as well as large groups of 20-50 in the northern part of the range. There are reports of larger groups, including a remarkable 15 mile-long pod of Chilean dolphins near the shoreline at 39°22’S.

Exact population figures for Cephalorhynchus eutropia are unavailable, although the species has been considered rare except in areas where large groups are seen. In Chile, research has shown that these dolphins are abundant in Valdivia, the Gulf of Arauco, and near Chiloé where local populations seem to live year round.

Chilean dolphins inhabit shallow waters with strong currents and are known to enter estuaries and rivers. In the southern part of their range, Chilean dolphins tend to be more wary of boats, however in the north they have been observed bow riding.

Chilean dolphins, Cephalorhynchus eutropia, feed on crustaceans, cephalopods, and fish including such as sardines and anchovies. They are also known to feed on green algae.

The reproductive patterns of Chilean dolphins, Cephalorhynchus eutropia, are unknown.

Chilean dolphins, Cephalorhynchus eutropia, are caught as bait for long-line swordfishing and crab fisheries. They have also been caught for human consumption. Between 1,300-1,500 dolphins have been reported harpooned each year near the western Strait of Magellan. Hunting Chilean dolphins is now illegal, however independent fishermen continue to use this species for bait as their remote locations make it difficult to enforce the laws.

Chilean dolphins are also at risk of becoming bycatch, particularly in the northern range of their habitat where gill net fisheries are present.

Given the insufficient data on the population size of Chilean dolphins, Cephalorhynchus eutropia, it is unknown what impact hunting and capture as bycatch will have on their ability to thrive.