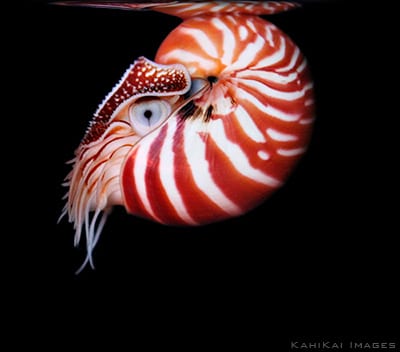 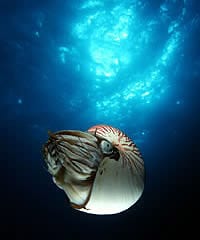 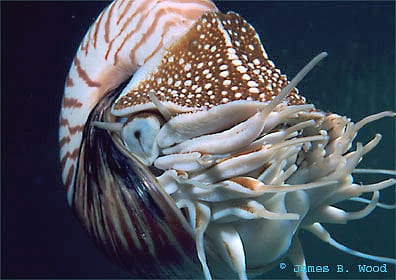 Chambered or emperor nautiluses, Nautilus pompilius (Linnaeus, 1758), reach about 20 cm in length. The spiral shell of chambered nautiluses is thin and smooth with a brown and white pattern. They have up to 30 chambers created in their shells as the animals increase in size and move to occupy the outermost chamber. Chambered nautiluses maintain buoyancy through gas passed through a tube in the shell called a siphuncle. This also helps the animal stay upright in the water. Chambered nautiluses have about 90 small suckerless tentacles close to where their body is attached to their shell. These mollusks have very simple eyes without a cornea or lens. Nautilus and Allonautilus are the last living genera of externally shelled cephalopods.

Chambered nautiluses, Nautilus pompilius, are found in the western Pacific Ocean. They are often found near the ocean bottom or near coral reefs in waters up to 500 m deep, but they do travel to shallower waters at night.
https://www.youtube.com/watch?v=YBCsF8hQK1M

The primitive eyes of the the chambered nautilus, Nautilus pompilius, are not effective for finding prey, therefore the animals uses its acute sense of smell to find small fishes and crabs. They are also known to feed on carrion.

Chambered nautiluses reach sexual maturity at between 15-20 years of age and reproduce through internal fertilization. Males transfer sperm to the females using 4 of their tentacles through a spermatophore with a protective coating that contains a mass of sperm, which adheres to the female’s mantle wall. After the spermatophore is transferred to the female, the coating dissolves and the sperm is released. Females then lay fertilized eggs, each about 3.8 cm in length. The shells of newly hatched chambered nautiluses are about 2.5 cm in diameter.

What we don’t know about nautilus – by Dr. James B. Wood, The Cephalopod Page

Nautilus pompilius first appeared around 550 million years ago during the early Paleozoic era. According to fossil records, some had shells between 6-9 m long when uncoiled.

Unfortunately nautilus shells are widely collected by humans and therefore commercial fishing for this animal is too common. Since 1987, export of chambered nautilus shells has been widely banned, but many countries continue to sell them. A small percentage are also taken for the aquarium trade. It has been reported that over the course of one 2 year period, as many as 10,000 live animals were caught and killed for their shells.