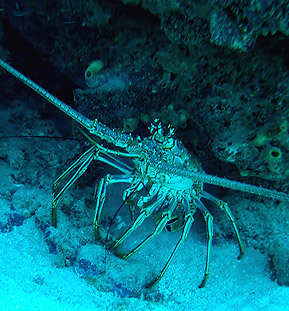 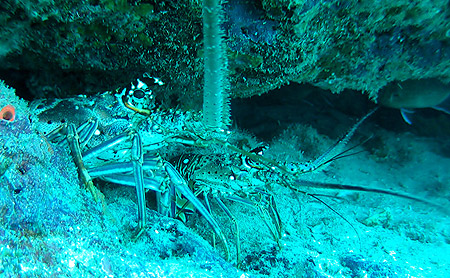 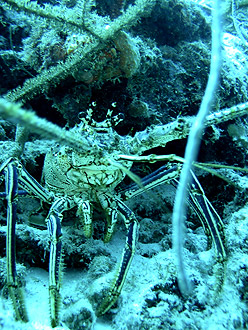 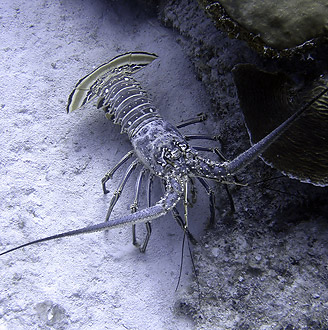 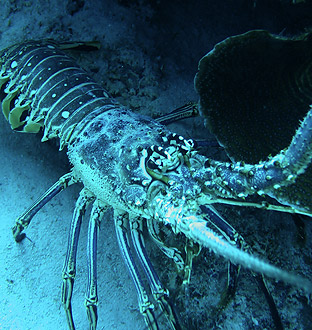 Caribbean spiny lobsters, Panulirus argus (Latreille, 1804), aka Florida spiny lobsters, grow to about 60 cm in length. Like the other 20 members of the genus Panulirus, such as the Australian, California, and Chinese spiny lobsters, they lack the large pinching claws of their Maine lobster relatives. Their primary defense are the spines that cover its shell, which help protect them from predators. Caribbean spiny lobsters use a second pair of antennae in sensory perception, which are found folded along side their body when it’s not in use. These lobsters have a striped body, brown-gray in color with yellow spots on the segmented tail. They also have compound eyes and can detect orientation, form, light, and color. If startled, these lobsters will kick their large abdominal tails rapidly to swim away backwards to safety.

Caribbean spiny lobsters, Panulirus argus, inhabit tropical and subtropical waters of the Atlantic Ocean, Caribbean Sea, and Gulf of Mexico. This nocturnal species inhabits coral reefs where they hide during the day in crevices under ledges.

Caribbean spiny lobsters, Panulirus argus, feed primarily on gastropods, chitons, bivalves, and carrion from the ocean floor. They are also known to feed on sea urchins, worms, crustaceans, and some types of sea vegetation.

Caribbean spiny lobsters are preyed upon by many species such as moray eels and nurse sharks.

Caribbean spiny lobsters, Panulirus argus, mate between March and June using external fertilization for reproduction. Their reproductive glands are found on the sixth thoracic segment of females and on the eighth thoracic segment of males. During mating, the males pass a thick spermatophore to the females known as a “tarspot” that fertilizes their eggs. They carry the fertilized eggs externally on their thoraxes where they become hard and black. At this stage the females deposit their eggs in protected places where they grow into a larval stage and become planktonic.

In south Florida, spawning occurs from April through October when water temperatures exceed 23°C. Settlement of pueruli, the free-swimming phase linking planktonic and benthic life stages, occurs year-round. A peak in settlement usually occurs during the spring and sometimes during other seasons.

Usually, less than a half million pounds are landed outside of the Florida Keys. Within the Keys, the fishery developed in the Key West area and expanded to the middle keys. This development occurred around 1968, when the minimum carapace length was decreased to 7.6 cm. The current fishing season opens on August 6 and closes March 31. Approximately 40% of the season’s landings occur in August, which is followed by a sharp decrease in landings thereafter. Effort also declines after the opening of the stone crab fishery on October 15. A spiny lobster trap reduction program was implemented in August 1993 to reduce excess effort in the Keys lobster fishery.