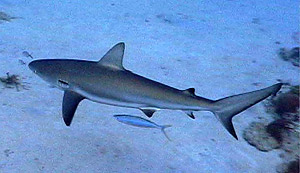 Caribbean reef sharks are physically similar to a number of sharks:

Dusky sharks, C. obscurus, though the dusky has broad, triangular anterior upper teeth, and the rear tip of the second dorsal fin is longer.

Sandbar sharks, C. plumbeus, have shorter snouts and first dorsal fins that are closer to the head originating over the pectoral fin base.

Silky sharks, C. falciformis, can be distinguished by their larger free rear tip of the second dorsal fin and by their teeth, which are more serrated at the base of the tooth rather than the cusp.

Caribbean reef sharks are also morphologically and ecologically very similar to gray reef sharks, which are found only in the Indo-Pacific region.


Caribbean reef sharks, Carcharhinus perezii, are found in tropical waters of North, Central, and South America and is particularly abundant in the Caribbean. It can also be found off the coasts of Florida, Bermuda, the northern Gulf of Mexico, Yucatan, Cuba, Jamaica, Bahamas, Mexico, Puerto Rico, Colombia, Venezuela, and Brazil. It is one of the most abundant sharks around the Bahamas and the Antilles. In the Atlantic, they are rarely found north of the Florida Keys.

Caribbean reef sharks tend to inhabit coral reefs and ocean bottoms near the continental and insular shelves. They prefer shallow waters with a maximum depth of 30 m. They are often found on the outer edges of coral reefs near drop offs and lying motionless on the ocean bottom.

Caribbean reef sharks feed on bony fishes and probably large, motile marine invertebrates using its acute senses of smell, sight, touch, hearing, and electric vibration using its ampullae of Lorenzini, small pores under the skin that form a sensory network. This shark, and others, also uses a lateral canal system in the body to detect water vibration. Prey is grasped at the mouth corner via a sudden lateral (sideways) snap of the jaws.

Juvenile Caribbean reef sharks are preyed on by larger shark species, such as the tiger and bull shark.

Caribbean reef sharks are a viviparous species, meaning females give birth to live young that she has nourished with a placental sac. Females reach sexual maturity between 2-3 m, males between 1.5-1.7 m. Litters average 4-6 pups that measure about 70 cm. Reproductive behavior of the Caribbean reef shark is not well known in the northern hemisphere. In the southern hemisphere females give birth between November-December, which is the summer season, after a 12 month gestation. Females often have scars from bites by males during mating.

Caribbean reef sharks are not an aggressive species and are not considered dangerous to humans unless provoked. However, they are excitable and may make close passes at divers as well as bite in the presence of speared fish. Aggressive behavior may be displayed if the shark feels threatened or “cornered.” When threatened, it stiffly lowers its pectoral fins and makes frequent, sharp direction changes. This species is important in dive ecotourism in the Bahamas, where organized “shark feeds” are staged at traditional sites. Aggregations of Caribbean reef sharks at these sites are highly vulnerable to being fished out; a single longline could decimate an entire population.

Gray reef sharks, C. amblyrhynchos, a species similar to the Caribbean reef shark, are known to display threat behaviors such as swinging of the head in an abnormal pattern, quick or abrupt movements, and arching the back while lowering the pectoral fins.

When consumed, shark flesh may be harmful to humans because of high mercury levels.