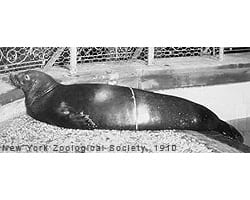 There have been no confirmed sightings of Caribbean monk seals since 1952. The species is thought to have originally inhabited the beaches, cays, and reefs of the Caribbean, ranging from the Greater Antilles to the northern Lesser Antilles, the Bahamas, the northeastern coasts of Central America, Mexico’s Yucatan Peninsula, and the Florida Keys. The last remaining colony is believed to have lived at Serranilla Bank, halfway between Nicaragua and Jamaica.

Caribbean monk seals probably had similar diets to that of Hawaiian monk seals which include regional fish, lobsters, octopuses, reef fishes, and eels.

The breeding season for the Caribbean monk seal used to began in December. Pups were born with black fur coats and likely measured about 1 m in length.

Although sightings of a seal-like animal were spotted in Puerto Rican waters near the north coast of Haiti, along the coast of the Dominican Republic, and in the eastern Bahamas, a 6,377 km aerial survey of the former range of Caribbean monk seals in 1973 provided no evidence that members of this species still exist (and there have been no reported sightings since that time). The species is listed as Extinct on the IUCN Red List and as an Appendix I species under CITES.