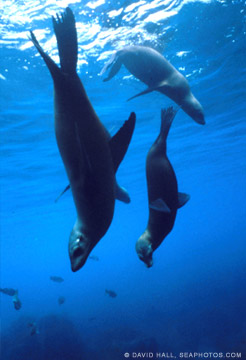 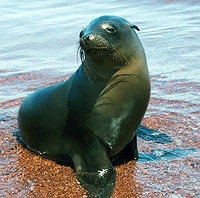 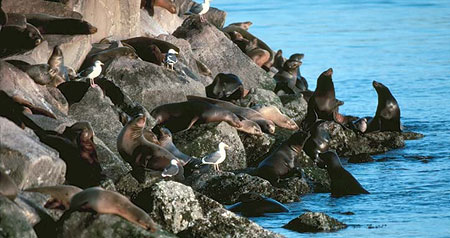 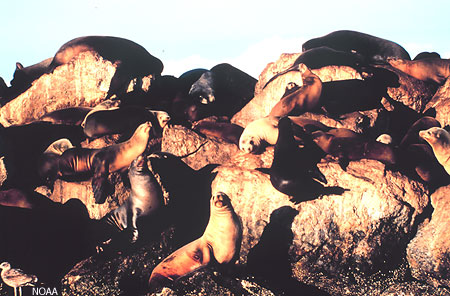 California sea lions are well known for their intelligence, playfulness, and noisy barking. Their color tends toward chocolate brown, although females are often a lighter golden brown. Males may reach 454 kg (average 390 kg) and 2.1 m in length. Females grow to 110 kg and up to 1.8 m in length. They have a “dog-like” face, and around 5 years of age, males develop a bony bump on top of their skull called a sagittal crest. The top of a male’s head often gets lighter with age too. These members of the Otariid, or “walking seal”, family have external ear flaps and large flippers that they use to “walk” with on land. The trained “seals” in zoos and aquaria are usually California sea lions.

Family Otariidae (fur seals and sea lions)
This family includes 14 species in 7 genera. Their distribution is complex. In the Pacific, they are found along the North and South American coasts, the coasts of central and northern Asia, and on New Zealand and several other islands, including the Galapagos. In the South Atlantic, otariids can be found along the South American coast and on a number of islands. In the Indian Ocean, they are found only along the coast of SW Australia and on islands.

Sea lions are large, ranging from around 150 kg to over 1,500 kg, and males tend to be much larger than females (called sexual dimorphism). Their bodies are slender and elongate. Small, cartilaginous, external ears are present. All otariids have fur. In the sea lions, relatively coarse hairs predominate, while in the fur seals, dense underfur is also present. Colors are generally shades of brown, without stripes or other contrasting markings. The fore flippers of otariids are long and paddle-like, more than 1/4 of the length of the body. The surfaces of the fore flippers are naked and leathery, and claws are present but small. The hind flippers are also large. They differ from those of true seals (phocids) in that they can be rotated under the animal when it is on land, partially supporting the body and helping in locomotion. Otariids also have a small but distinct tail.

Otariids tend to be highly social, forming large herds during the breeding season. Within these herds, individual males maintain harems. Males arrive on the breeding grounds before females and set up territories, which they defend aggressively. Females arrive and segregate into harems of 3-40 individuals, depending on the size and strength of the male. Soon after they arrive, females give birth to pups from the previous year’s breeding season, and within a few days, enter estrous. Mating takes place on land. A period of delayed implantation insures that the young will be born in a year, when the breeding herds again form.


California sea lions are found from Vancouver Island, British Columbia, to the southern tip of Baja California in Mexico. They breed mainly on offshore islands from southern California’s Channel Islands south to Mexico, although a few pups have been born on Año Nuevo and the Farallon Islands in central California. A third population in the Sea of Japan became extinct probably during World War II.

California sea lions are opportunistic feeders and eat such things as squid, octopus, herring, rockfish, and mackerel. In turn, sea lions are preyed upon by orca (killer whales) and great white sharks. Sea lions are known to battle such diseases as pneumonia, caused by a parasitic lungworm, and a bacterial infection called leptospirosis, which affects their livers and kidneys.

Most pups are born in June or July and weigh 6-9 kg. They nurse for at least 5-6 months and sometimes for over a year. Mothers recognize pups on crowded rookeries through smell, sight and their vocalizations. Pups also learn to recognize the vocalizations of their mothers. Breeding takes place a few weeks after birth. Males patrol territories and bark almost continuously during the breeding season.

California sea lions are very social animals, and groups often rest closely packed together at favored haulout sites on land, or float together on the ocean’s surface in “rafts.” They are sometimes seen porpoising too, or jumping out of the water, presumably to speed up their swimming. Sea lions have also been seen “surfing” breaking waves.

Sea lions have frequently been found illegally shot and also caught in drift or gill nets and other marine debris. However, their population is growing steadily, and California sea lions can be seen in many coastal spots such as Seal Rocks or PIER 39 in San Francisco.