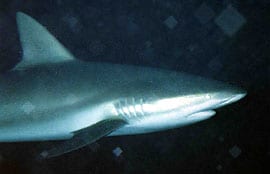 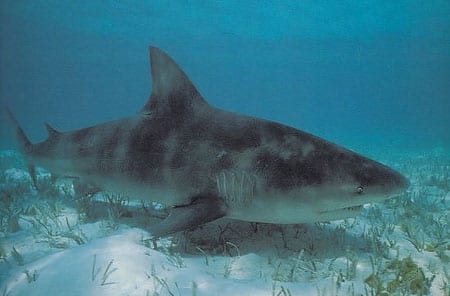 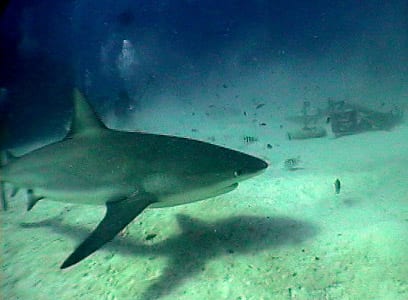 Bull sharks, Carcharhinus leucas (Müller and Henle, 1839), aka zambezi, ganges (often confused with the Ganges river shark, Glyphis gangeticus), ground sharks, river sharks, freshwater whalers, estuary whalers, shovelnoses, slipway greys, and swan river whalers, are massive and fearsome sharks with a short, broad, blunt snouts, small eyes, and triangular saw-edged upper teeth. Their characteristic barrel-shaped body lacks an interdorsal ridge. The first dorsal fin is broad and triangular and less than 3.2 times height of second dorsal fin. They are gray in color on their dorsal (upper) side and white on their ventral (under) side, and have fins often seen with dark tips, particularly in juveniles. Females tend to be larger than males, reaching up to 3.5 m maximum length and a maximum weight of 317 kg. They are reported to live up to 25 years. Photo: Giant Bull Shark Surprises Researchers

Bull sharks are widespread coastal and freshwater sharks inhabiting shallow waters in bays, estuaries, rivers, and lakes. They have a unique ability to penetrate far up rivers and hypersaline bays, particularly when they’re young. They have often been found hundreds of km from the sea. Adults can also be found near estuaries and freshwater inflows to the sea. Found typically between 3-30 m in depth.

They range from the western Atlantic: Massachusetts, USA to southern Brazil; eastern Atlantic: Morocco, Senegal to Angola; Indo-West Pacific: Kenya and South Africa to India, and Vietnam to Australia; eastern Pacific: southern Baja California, Mexico to Ecuador and possibly Peru. They are a sympatric species (occupying the same range without loss of identity from interbreeding) with C. amboinensis and the Ganges shark, G. gangeticus. Off KwaZulu-Natal, South Africa, it has been suggested that bull sharks and the very similar C. amboinensis avoid competing with one another by occupying separate habitats in the region.

Bull sharks are viviparous (live bearers), with a yolk-sac placenta, and give birth to 1-13 young per litter. Their size at birth is about 60-80 cm in length. In the western north Atlantic off Florida and the Gulf of Mexico, and off South Africa, the young are born in late spring or early summer. Off Nicaragua, females may have young throughout the year, with a peak in spring and early summer. The estimated gestation period is 10-11 months. Males reach sexual maturity between 1.6 and 2.3 m in length, females at 1.8 to 2.3 m, both between 15-20 years. Mating features distinct pairing with embrace; the male nips at the female’s back and grasps one of her pectoral fins in his mouth. Females often have courtship scars.

Bull sharks, Carcharhinus leucas, are considered one of the most dangerous species of tropical shark; they’ve been implicated in a number of attacks on humans. They are fished commercially and sold fresh, fresh-frozen, or smoked for human consumption. They are also finned for shark fin soup. Their hides are sold for leather, their liver for oil, and their carcass for fishmeal.

According to the International Shark Attack File (ISAF) at the Florida Museum of Natural History Ichthyology Department, here are some things you should do to avoid bull sharks:

Bull sharks, Charcarhinus leucas, are now listed as Near Threatened (NT) on the IUCN Red List of Threatened Species due to:

“The Bull Shark (Carcharhinus leucas) is a common tropical and subtropical species that occurs in marine, estuarine and freshwater. It is the only species of shark that can exist for long periods in freshwater and penetrates long distances up large rivers. It is caught in fisheries throughout its range, but it is rarely a target species. Its occurrence in estuarine and freshwater areas makes it more vulnerable to human impacts and habitat modification.”