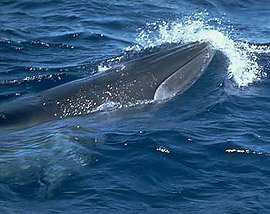 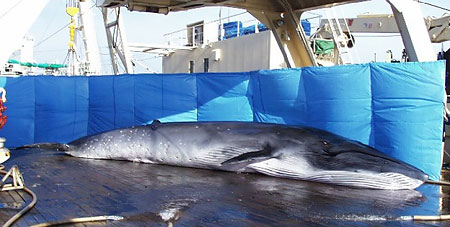 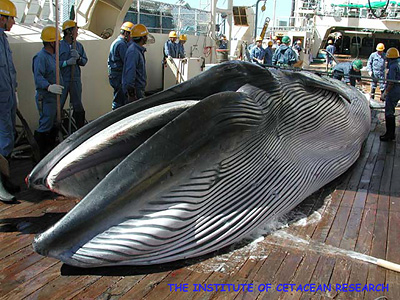 The flippers are small compared body size. The prominent dorsal fin is sickle shaped. Instead of teeth, these whales have two rows of baleen plates. These plates are located on the top jaw and number approximately 300 on each side. Each baleen plate is short and wide, 50 cm by 19 cm. Mass: 12,000-20,000 kg. Thought to live between 50-70 years. 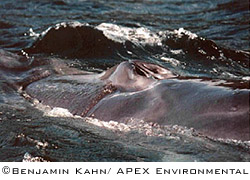 
Bryde’s whales are found in the Atlantic, Pacific, and Indian Oceans and off the coast of Ethiopia in warm temperate and subtropical waters. Populations exist mainly in warmer waters (~20°C). They are not migratory, but they do move between inshore to offshore waters to follow food.

Bryde’s whales, Balaenoptera edeni, feed almost exclusively on pelagic fish (pilchard, mackerel, herring, and anchovies), pelagic crustaceans (shrimp, crabs, and lobsters), and cephalopods (octopus, squid, and cuttlefish). The Bryde’s whale consumes whatever shoaling prey is available and often exploits the activities of other predators, swimming through and engulfing the fish they have herded. They are therefore frequently found in areas of high fish abundance, along with seabirds, seals, sharks, and other cetaceans.

Some populations of Bryde’s whales were seriously depleted as a result of historical whaling practices. As a result of the 1986 Moratorium on Whaling, they are protected worldwide. Estimated Current Population: 40-80,000 animals (2000).

Bryde’s whales are classified as Data Deficient on the IUCN Red List of Threatened Species: