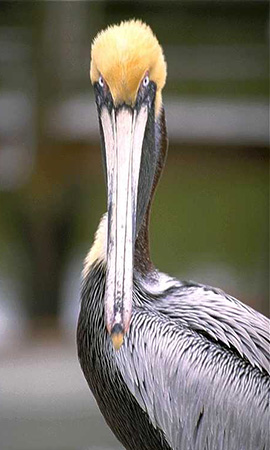 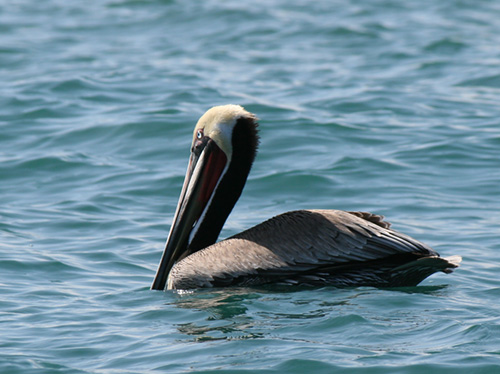 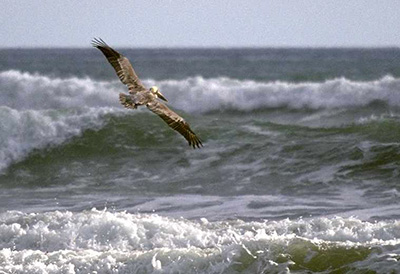 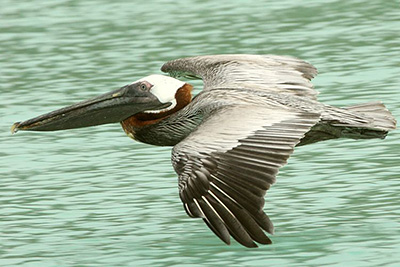 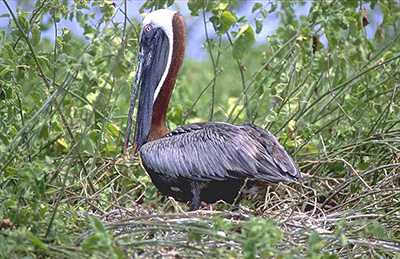 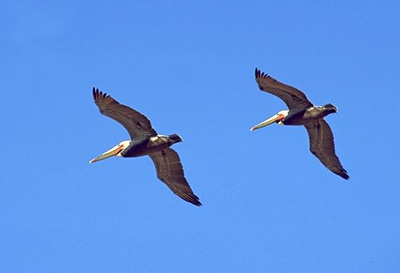 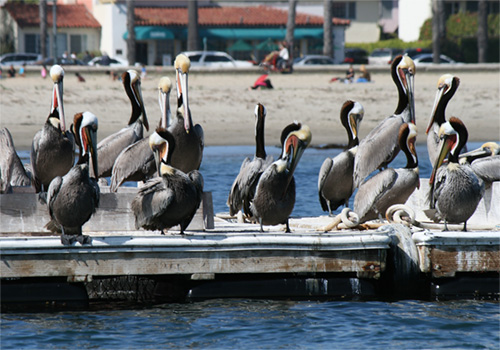 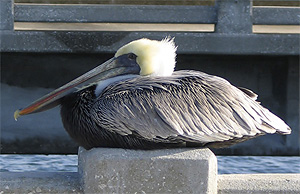 All pelicans—and no other birds—have a totipalmate foot, or one in which all four toes, including the hind one, are united by a web of skin. Pelicans also all share a distinctive bill, as long or longer than their head, from which dangles a large naked pouch of skin that holds two or even three times as much as the bird’s stomach – about three gallons. Pelicans let the water drain out of their pouches from the corners of their mouths before they swallow. Once they have caught their prey, they will carry it in the esophagus or gullet, rather than the pouch. Brown pelicans, Pelecanus occidentalis (Linnaeus, 1766), are set apart from its brethren by its dark, bulky body, about 1.2 m long. Their head is downy and white with a pale yellow wash on the crown; their long bill is grayish; and their back, rump, and tail are streaked with gray and dark brown. During mating season, their neck turns dark brown. Their eyes are pale yellow and their legs and feet are black.


Brown pelicans are strictly coastal and very rarely seen inland, but they do seem to be flexible in terms of latitude; they are widely distributed along the Pacific, Atlantic, and Gulf of Mexico coasts as far north as Nova Scotia, spanning both temperate and tropical waters. Pelicans are gregarious and live in large flocks throughout the year.

Brown pelicans search the water for food while aloft, then dive swiftly once they have spotted their prey. It drops from the air with its wings partly folded and dives into the water—the only species of pelican to exhibit such behavior. Usually the unlucky fish is a menhaden, which accounts for 90 to 95% of the birds’ diet, but brown pelicans are also known to prey on pigfish, pinfish, herring, sheepshead, silversides, mullet, grass and top minnows, and they sometimes eat crustaceans, usually prawns. Despite their clumsiness on land, pelicans are graceful divers and flyers, thanks to internal air sacks beneath their skin and in their bones. They tend to fly in groups, sometimes in a typical “V” formation but usually in regular lines or even single file.

Although brown pelicans do form pair bonds, they do not seem to communicate with each other very much after mating. Nesting peaks during March and April, when male pelicans pick nesting sites, perform an “advertising” display to attract females, and then build their nests. If the nests are built in trees or bushes, they will be made of reeds, grasses, straw, and sticks. Nests built on the ground consist of a shallow scrape lined with feathers and a rim of soil built a few inches above the ground. Brown pelicans lay 2 or 3 chalky-white eggs each breeding season. The eggs are incubated for about a month under the parents’ feet. After hatching, the progress of the young depends on the location of the nest. Birds born in ground nests will leave after about a month; those in the treetops generally don’t venture out until two or even three months after hatching.

Brown pelicans were victims of DDT and other hard pesticides during the 1960s and 70s; their numbers declined markedly during that time, probably because the birds were eating contaminated fish. As with other birds, DDT thinned out the shells of brown pelican eggs, killing the young. Populations have since recovered since DDT was banned; however, the species’ range is smaller than it used to be. The brown pelican is on the US Endangered Species List. They are endangered in all of their range except for the Atlantic coast, Florida and Alabama.