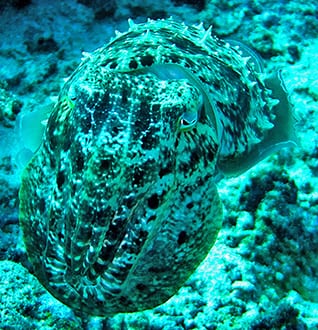 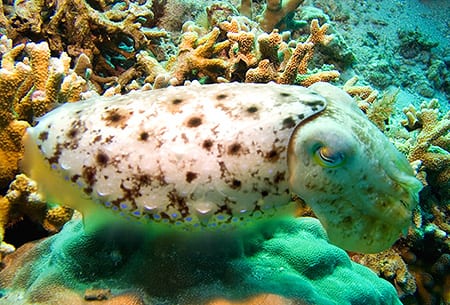 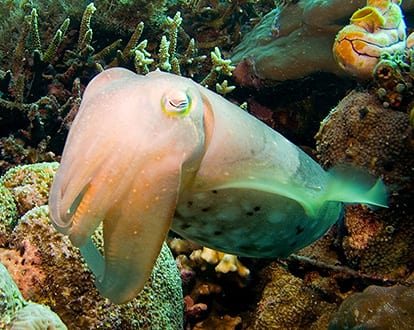 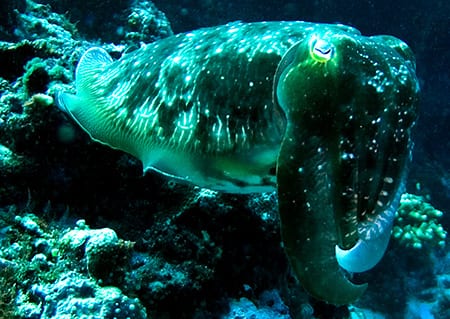 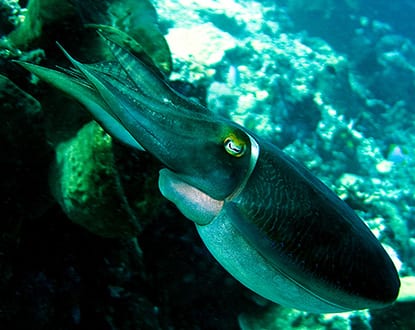 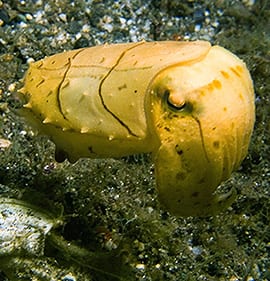 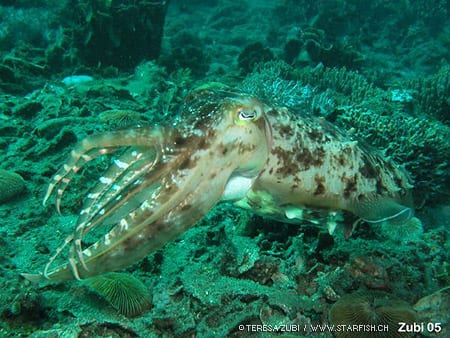 Broadclub cuttlefishes, Sepia latimanus (Quoy/Gaimard, 1832), are large fascinating cephalopods with oval mantles and crescent-shaped clubs. This species can reach up to 50 cm in mantle length and weigh up to 10 kg.


Like many cephalopods, broadclub cuttlefishes can be seen displaying a range of colors and textures. Commonly they are light brown or yellowish with white mottled markings. Males are sometimes dark brown, particularly during courtship and mating. Their arms have longitudinal white bands that appear as broad white blotches when extended. Some of their arms have longitudinal brown bands that extend to their heads. Their dorsal (upper) mantle can sometimes be seen with a saddle mark with small white and brown spots. Their dorsal mantle also has narrow brown transverse bands, and bold, white, transverse stripes and spots. Their eyes are yellow around the ventral (lower) margins and their fins are pale with white, transverse stripes extending onto their mantle and narrow, white bands along their outer margins.
https://www.youtube.com/watch?v=AjS2-Ftj_K4

The broadclub has a variety of different sucker sizes, some that are significantly larger than others. Their cuttlebone is bluntly rounded on either end, with a convex dorsal (curved upper) surface that flattens at the anterior (front) end. Their dorsal mantle is also covered with numerous large papillae and elongate papillae along the sides adjacent to base of each fin.

Broadclub cuttlefishes, Sepia latimanus, are found in the Indo-Pacific from southern Mozambique, throughout the periphery of the Indian Ocean, the Malacca Strait, the Melanesian Islands, South and East China Sea, Philippine Sea, and in Japan to southern Kyushu. They are also found in Indonesia south to northwestern and northeastern Australia and across northern Australian waters to southern Great Barrier Reef, the Coral Sea, Palau, Guam, New Caledonia, Fiji and Cocos (Keeling) Islands. They are found in waters up to 30 m near tropical coral reefs.

Broadclub cuttlefishes, Sepia latimanus, hunt during the day and appears to mesmerize prey with its rhythmic colored bands. They feed on small fishes and crustaceans.

Sepia latimanus mates in shallow water between January and May. Their eggs hatch in 38 to 40 days. During the breeding season, males establish a territory, defending a coral head where females lay eggs after mating. Courtship is highly ritualized and involves striking visual displays. Males often guard females to ward off other males. This species mates head-to-head and the male places spermatophores on the female’s buccal membrane near her mouth. The eggs harden after they are laid, which makes them difficult for predators to extract from the coral. When they hatch, juveniles hide among the coral and coral rubble, and often mimic mangrove leaves.

Broadclub cuttlefishes, Sepia latimanus, are an important species to fisheries throughout their range and are taken by trawls, hand lines, and spears. They are also caught as bycatch in southeast Asian trawl fisheries.