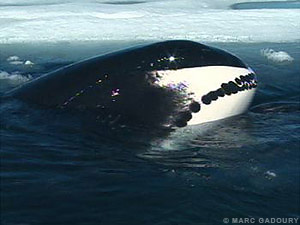 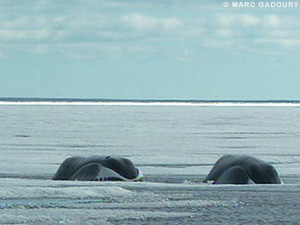 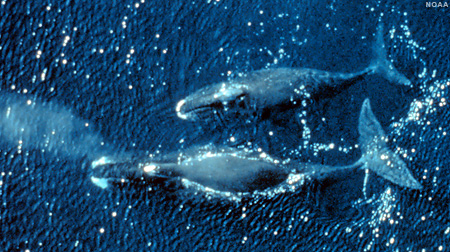 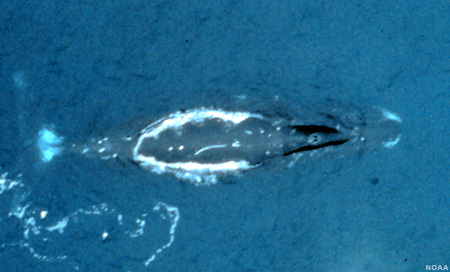 Bowhead whales, Balaena mysticetus (Linnaeus, 1758), aka Greenland right whales, average 15 m in length and weigh up to 54,431 kg. Adult males reach physical maturity at 15 m and reach sexual maturity is reached at 11.6 m. Adult females are slightly larger than males at both physical and sexual maturity. The bowhead is known for its huge head that equals one-third of its body length in size. The mouth is arched and the whale has a narrow rostrum, or beak-like upper jaw. The mouth is long and narrow measuring up to 4.3 m long with a massive tongue weighing up to 907 kg. This whale has 230-360 baleen plates on either side of the mouth. These plates consist of a fingernail-like material called keratin that frays into fine hairs on the ends along the inside of the mouth. The baleen plates are the longest of any whale species measuring up to 4.3 m in length and 30 cm in width.

Their body is black with a white chin patch featuring a line of black spots. Their triangular flukes, which can measure 7.6 m from tip to tip, and the tail also display white markings that grow larger with age. Their paddle-shaped flippers measure about 1.8 m in length. There is a peaked ridge on the dorsal side on the anterior end of the body before the blowholes, and a noticeable depression behind them. There is no dorsal fin characteristic of this genus. The bowhead lacks the abundance of calcium deposits on the thick skin characteristic of other right whales. The bowhead has a 50 cm thick layer of insulating fat, or blubber, for survival in the frigid waters of its habitat.

Bowhead whales have a circumpolar distribution in high latitudes in the Northern Hemisphere. They live under pack ice for most of the year, typically wintering at the southern limit of the pack ice or in polynyas (large, semi-stable open areas of water within the ice). Migration is seasonal. In spring as the ice breaks up, they migrate north and are often accompanied by beluga whales who follow them through the leads in the ice. The largest population of bowhead whales can be found in the Bering Sea in winter, migrating north into the western Arctic, Beaufort, and Chukchi Seas in the spring. Another population has been observed in summertime along the western and northern portion of the Sea of Okhotsk in Russia, notably around the Shantar Islands. Three additional populations are found in the Atlantic and Canadian Arctic in the Davis Strait and in Baffin Bay, Hudson Bay and Foxe Basin, as well as Spitsbergen Island and the Barents Sea. The Spitsbergen stock is suspected to be extinct.

Like right whales, bowhead whales, Balaena mysticetus, are skim feeders and consume about 1,800 kg of food each day. Their diet is more varied, however, and includes not only copepods and krill, but also other invertebrates. More than 60 prey species have been identified in the stomachs of bowheads killed by the Inuit hunt in Alaska. Bowheads are usually solitary while foraging, although they are occasionally seen feeding together.

These amazing whales give birth every 3-4 years, usually during the spring migration north, to calves that average 3.5-5.5 m long. The calves are nursed for up to 1 year. Mating season is thought to occur in the late winter or early spring, although mating has been observed at other times during the year. Their gestation period (pregnancy) is thought to last between 13-14 months. Weaning probably occurs between 9-12 months old.

Males are equipped with unusually large testes. Females are thought to mate with more than one male. Evidence exists that, like humpback whales, bowhead males also produce sounds to attract females, these sounds have been heard primarily in the spring.

Like the right whales, the bowhead was a prime target for whalers in the 1500s in the the North Atlantic. Thousands of animals were killed in the waters from Spitsbergen Island to Labrador. The Bering-Chukchi-Beaufort population was first hunted in the mid-19th century, and the Sea of Okhotsk population was exploited shortly thereafter. Of the five populations recognized today, only the Bering-Chukchi-Beaufort population, estimated at more than 8,000 animals, is not currently threatened. This population steadily increases—in spite of its popularity by Inuit hunters.

The Spitsbergen population is believed to be extinct or close to it, while the Canadian populations in Hudson Bay, the Foxe Basin, the Davis Strait, and Baffin Bay only numbers in a few hundred animals.

The Russian population in the Okhotsk Sea also numbers at only a few hundred because of its popularity and exploitation that continued into the 1960s. With the exception of the strictly managed Inuit hunt in Alaska, bowheads have been protected since 1946 throughout their range. The Inuit are allowed to hunt them for food and oil.