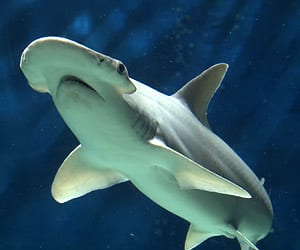 Bonnethead sharks, Sphyrna tiburo (Linnaeus, 1758), aka shovelheads, are well-known for their characteristic semicircular head. Bonnethead sharks reaches about 1.50 m in length, and weigh a maximum of 10.8 kg. They are often found in small groups separated by sex.

Their “hammer-shaped” head is thought to have evolved to maximize the area of sensory organs such as the ampullae of Lorenzini (special sensors in sharks’ skin used to detect chemical, physical, and thermal changes as well as the electrical fields of prey species that are often buried in the ocean bottom). Their hammer shape also allows them to “scan” significantly larger areas of the bottom when hunting than other shark species.


Bonnethead sharks, Sphyrna tiburo, are found in subtropical waters 41°N-34°S in the western Atlantic from North Carolina, USA to southern Brazil, in the Caribbean including Cuba and the Bahamas, and in the Gulf of Mexico. They are also found in the eastern Pacific from southern California, USA to Ecuador. Bonnetheads prefer continental and insular (island) shelves near inshore and coastal areas around mud and sandy bottoms. They are also associated with coral reefs and shallow water estuaries and bays. The depth range for bonnetheads is between 10-80 m.

The bonnethead shark, Sphyrna tiburo, is viviparous, meaning the embryos receives nourishment from the female while developing within her body. Bonnetheads bear 6-9 pups per litter that measure 35-40 cm.

Bonnethead sharks are harmless to humans unless provoked.