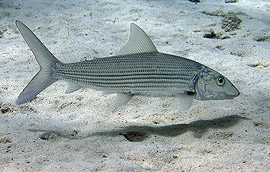 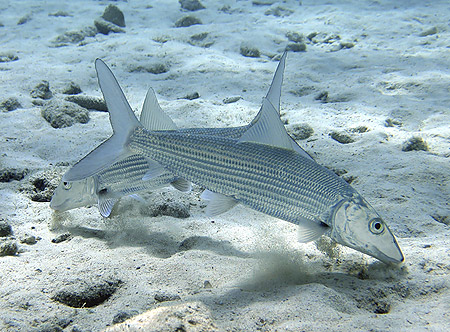 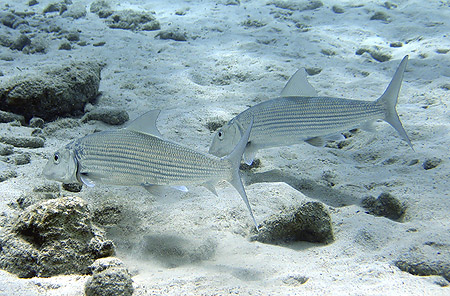 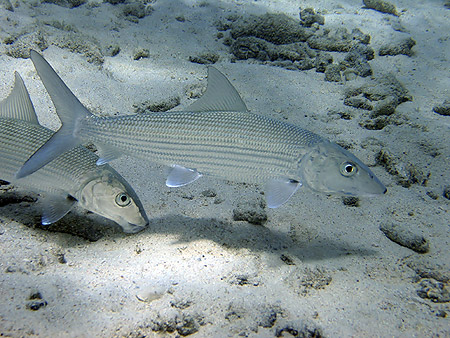 
Bonefishes, Albula vulpes, prefer reefs, shallows, estuaries, bays, grass flats, and other brackish areas at depths from 0 to 84 m. They are found worldwide in subtropical warm seas. In the Eastern Pacific, their range includes waters off California to Peru; the Western Atlantic range stretches from North Carolina to Florida, the Bahamas, the Gulf of Mexico, the Antilles and the rest of the Caribbean to Brazil.

A pelagic fish, bonefishes nonetheless feed on benthic creatures such as worms, crustaceans, and mollusks, rooting them out from the sandy bottom. Granular teeth, forming specialized dental plates, cover the bonefish’s tongue and upper jaw, and similar grinders are also present in the throat, helping the fish to grind up its prey. Small to medium-size individuals often feed in schools. Sharks and barracuda often prey on bonefish.

Bonefish spawning occurs year round in deep water where currents can easily disperse the developing eggs and larvae to other locations. These fish are generally less reproductively active during the hotter summer months. Sexual maturity is reached at two years and near ripe females may be as small as 23 cm. The eggs hatch into ribbon-like larvae that transform into a more fish-like form once they reach about 5 cm, at which point they move closer to shore. Their minimum population doubling time is estimated to be between 1.4 and 4.4 years.

In 1990, scientists reported that bonefish have caused a few episodes of ciguatera poisoning.