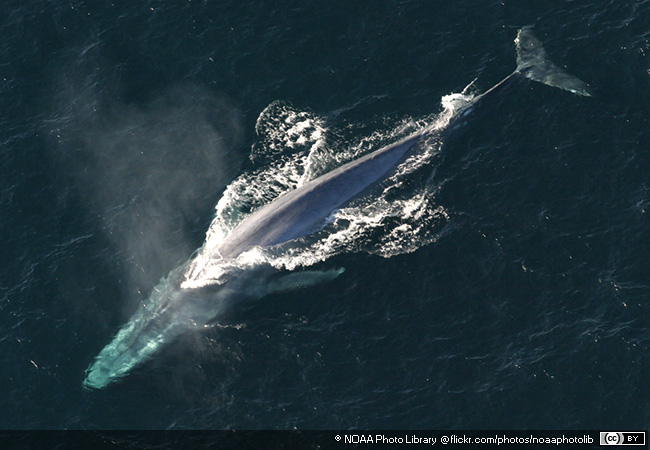 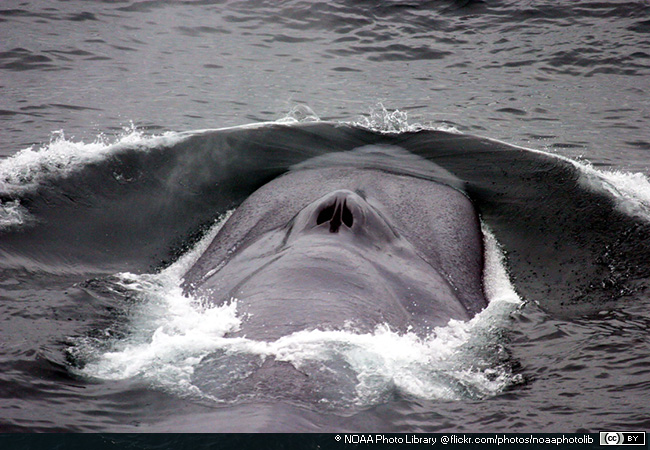 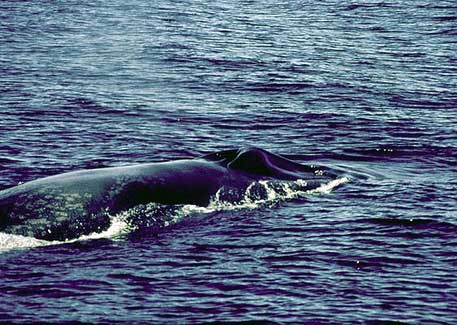 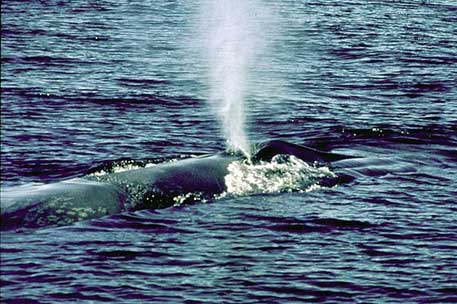 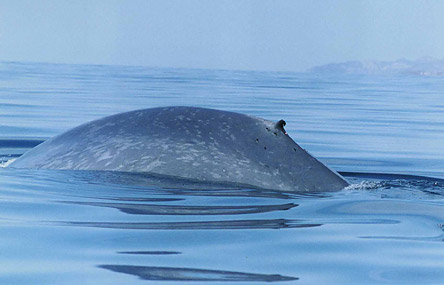 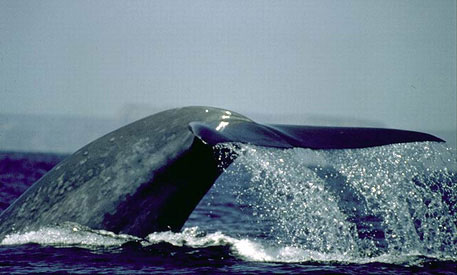 Blue whales, Balaenoptera musculus (Linnaeus, 1758), like all rorquals (Family Balaenopteridae, the family that includes the blue whale, Bryde’s whale, fin whale, humpback whale, minke whale, and sei whale), are long, slender whales that are much more streamlined than other large whales. There are 4 recognized subspecies of the enormous blue whale, the largest marine mammal in the sea, and possibly that has ever lived on Planet Ocean:

They have a pointed snout, paired blowholes, and a broad, flat rostrum (upper part of the head). The throat grooves, in addition to streamlining the shape of the whale, allow the throat area (called the cavum vent-rale) to expand tremendously during feeding. This allows the taking in of tons of food-laden water which is then discarded through their baleen plates leaving the fish or krill for swallowing. This efficient system enables the largest animals on earth to feed on some of the smallest. The baleen plates are broad and short, and the left and right rows are continuous anteriorly. The dorsal fin is falcate (curved). All rorquals have been hunted and some still are, although they are now protected by most nations subscribing to the International Whaling Commission.

Whale Evolution
All members of the Order Cetacea (includes all whales, toothed and those using baleen) are believed to have evolved from terrestrial hoofed mammals like cows, camels, and sheep some 45 million years ago – that’s about 40 million years before man! Recent comparisons of some milk protein genes (beta-casein and kappa-casein) have confirmed this relationship and have suggested that the closest land-bound living relative of whales may be the hippopotamus. Throughout their evolution, cetaceans have become perfectly suited to an aquatic environment, and are virtually incapable of leaving it. Cetaceans illustrate an example of adaptive radiation among mammals. Adaptive radiation allows mammals as a group to effectively inhabit the land, the sea, and the air through the development of special adaptations needed to survive in each of these environments. Members of the Order Cetacea have undergone a number of changes or adaptations needed to fare well in their watery home: their bodies have become streamlined for efficient movement through the water; their forelimbs have been modified into flippers which aid them in steering; their hind limbs have disappeared almost completely; their tail has become broadened horizontally and consists of two large flukes which propel them powerfully through the water by moving up and down, rather than side-to-side like a fish; in place of hair they have developed a thick layer of fat called blubber under their skin that insulates them from the cold and provides buoyancy; and the position of their nostrils has shifted to the top of their head creating a blowhole that allows them to effectively come to the surface for air. A whale’s blowhole generally reaches the surface before the rest of its body.

Adapting to the Sea
In addition, a number of other changes have taken place to help whales adapt to life in the sea. Many of these changes are related to the position and abilities of their sensory organs, as life in the water is not the same as life on the land. Sound and light travel differently in water than they do in the air. As a result, whales have developed unique ways of hearing and seeing. Hearing in particular is highly developed in whales, so much so that they depend on it in the same way that we depend on the combination of our eyes, ears and nose to understand the world around us. Many of the whale’s sensory and reproductive organs have been internalized to reduce drag while swimming. For example, whales do not have external ears, but rely on an internal system of air sinuses and bones to detect sounds. Changes in their reproductive and parental behaviors have also taken place, enabling whales to provide optimum care for their young in the cold, large ocean. Along with these differences, cetaceans do, however, possess many of the same physiological systems such as circulatory, digestive, respiratory, and nervous systems as the land mammals from which they evolved. For instance, many species possess multi-chambered stomachs even though there is no obvious advantage to having such an arrangement as whales do not chew cud!

The Blue Whale
The blue whale is the largest mammal, possibly the largest animal, to ever inhabit Planet Ocean. An average blue whale is between 23-24.5 m long, and weighs about 99,800 kg, and females are even larger than males of the same age, the largest may weigh as much as 136,000 kg! The body is long, somewhat tapered, and streamlined, with the head making up less than one-fourth of its total body length. Its rostrum is very broad and flat and almost U-shaped, with a single ridge that extends just forward of the blowholes to the tip of the snout. The blowholes are contained in a large, raised “splash guard”, and the blow is tall and straight and over 6 m high, sometimes as much as up 10 m high! Their body is smooth and relatively free of parasites, though barnacles attach themselves to the edge of the fluke and occasionally to the tips of the flippers and to the dorsal fin. There are 55-68 ventral grooves or pleats extending from the lower jaw to near the navel.

The blue whale is blue-gray in color, often with lighter gray mottling on a dark background or with dark spots on a light background. The underside of the flippers may be a lighter color or white, while the ventral (topside) side of the fluke is dark. The ventral side of its body is often yellow-green in color because blue whales graze on microorganisms called diatoms in the cold waters of the Antarctic, North Pacific and North Atlantic. Because of this yellow color, the early whalers nicknamed blue whales “sulphur bottom.”

Its dorsal fin is small and triangular-to-falcate in shape, and is located three-fourths of the way back on the body. The fin measures only 30 cm at its highest point though its size and shape are highly variable. Its flippers are tapered and relatively short, about 12% of the total body length. The fluke is broad and triangular. The rear edge is smooth with a slight median notch.

Though they may be found singly or in small groups, it is more common to see blue whales in pairs. They are sometimes seen in larger groups and loosely defined concentrations of 50-60 have been observed. Imagine 5,000 tons of marine mammals in one spot! They are fast, strong swimmers, capable of reaching 48.3 kph when alarmed, but they usually cruise along at about 19.3 kph. Normal dives last from 10-20 minutes and are separated by 8-15 blows. Like humpbacks, blue whales also sing or call. Hear the call of the blue whale here.

Blue whales are the largest predator to ever inhabit this planet, though it is thought to feed almost exclusively on tiny, shrimp-like creatures called euphausiids or krill. Feeding is usually at depths less than 100 m; harpooned animals have dived as deep as 500 m. During the summer feeding season the blue whale gorges itself, consuming an astounding 3,600 kg or more each day. This means it may eat up to 40 million krill a day. Baleen whales, they have a series of 260-400 fringed overlapping plates hanging from each side of their upper jaw where teeth would otherwise be located. These plates consist of a fingernail-like material called keratin that frays out into fine hairs on the ends near their tongue. The plates are black and measure about 51 cm in length toward the front of their mouth to about 102 cm at the rear. During feeding, large volumes of water and food are taken into the mouth and the pleated grooves in their throat expand enormously. As their mouth closes, water is expelled through the baleen plates, which trap the food inside to be swallowed.

Recent research indicates that blue whales reach sexual maturity between the ages of 6-10 years, or when males average about 23 m and females are about 24 m. Calves are born at intervals of 2 to 3 years and gestation is about 12 months. Calves are 7-8.2 m long at birth and 2,722 kg. Calves nurse for 7 to 8 months and are weaned when they reach 16 m in length. At that time they weigh about 20,900 kg. During the nursing period, calves consume 379 liters of the fat-rich mother’s milk each day, gain 91 kg/day, or 3.8 kg/hour, and grow 3.78 cm in length a day.

Because of their enormous size and speed, blue whales were safe from early whalers, who could not pursue them in open boats with hand harpoons. But in 1868 a Norwegian, Sven Foyn, revolutionized the whaling industry with the invention of the exploding harpoon gun and by using steam and diesel powered factory ships and catcher boats. He also perfected the technique of inflating dead whales with air so they wouldn’t sink after being harpooned. The whaling industry began to focus on blue whales after 1900. A single 27 m blue whale could yield up to 120 barrels of oil, and the blues were killed by the tens of thousands. The slaughter peaked in 1931 when over 29,000 were killed in one season.

After that blue whales became so scarce that the whalers turned to other species. In 1966, almost too late, the International Whaling Commission (IWC) banned all hunting of blue whales and gave them worldwide protection. Recovery has been extremely slow, and only in the last few years have there been signs that their numbers may be increasing. Pre-whaling numbers have been estimated at 200,000, and though exact figures are not known, an estimated 5,000 survive today in three populations: North Atlantic, North Pacific, and the Southern Hemisphere.

Despite their slow recovery, blue whales are classified as Endangered (EN A1abd) on the IUCN Red List of Threatened Species:

ENDANGERED (EN): A taxon is Endangered when the best available evidence indicates that it meets any of the criteria A to E for Endangered (see Section V), and it is therefore considered to be facing a very high risk of extinction in the wild.