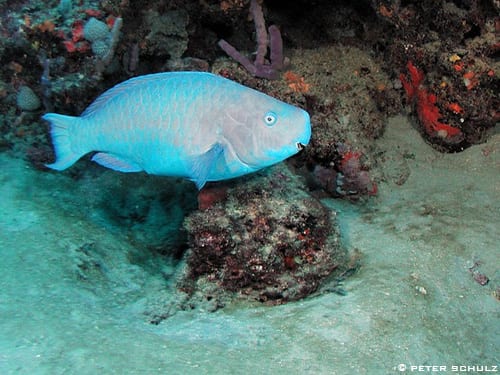 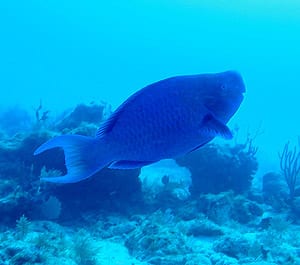 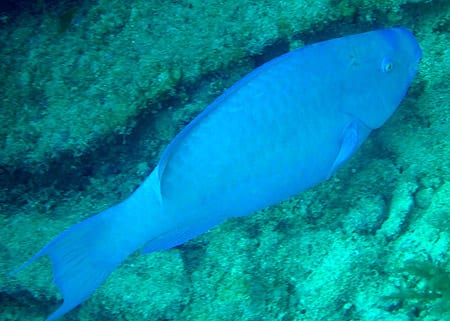 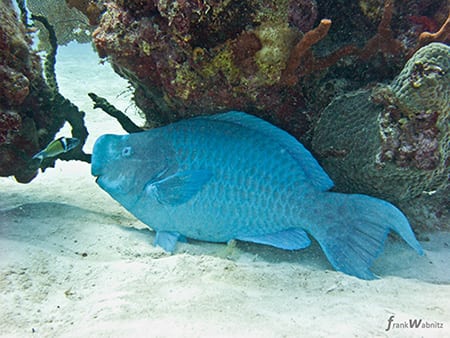 Blue parrotfishes, Scarus coeruleus (Edwards, 1771), aka blue kwabs, blue parrots, blueman, and kwabs, are uniformly blue in color with a yellow spot on top of the head, which fades as the fish grows. Adults have large scales and develop a protruding snout and extended upper and lower caudal (tail) fin lobes. Like other parrotfishes, blue parrotfishes have the characteristic beak-like jaws with fused teeth used for scraping algae from coral and other rocky substrates. They also have pharyngeal teeth that are used to grind ingested rocks into sand, which is then eliminated, creating new sand in the process. They average 30-75 cm in length with a max length of 1.2 m.


Blue parrotfishes, Scarus coeruleus, are found at depths of 3-25 m in the western Atlantic from Maryland in the US to Bermuda, the Bahamas and south to Brazil. They are also found throughout the West Indies.

Blue parrotfishes, Scarus coeruleus, feed on algae and small organisms in the sand. Parrotfish tend to forage during the day spending up to 80% of their time in search of food.

Although there is no data available on the reproductive habits of the blue parrotfish, Scarus coeruleus, it is likely that females release fertilized eggs into the water column, which become part of the plankton until they settle near the bottom after they hatch. Fertilized eggs begin to hatch 25 hours after they are released into the water. Parrotfishes in general spawn year-round, however peak spawning is thought to occur during the summer months for most species.

Ciguatera poisoning has been reported as a result of eating blue parrotfishes.

Frank Wabnitz @ SmugMug – photo of the blue parrotfish taken on November 4, 2010 in Akumal, Mexico, at a depth of approximately 40 to 50ft.