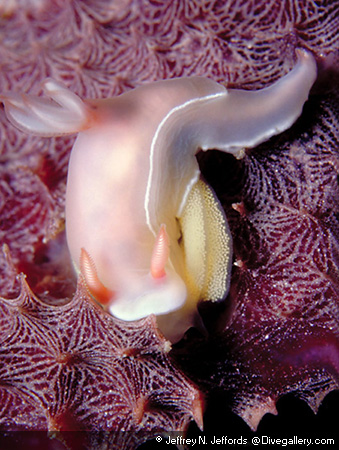 Blue dorid nudibranchs (sea slugs), Hypselodoris bullockii (Collingwood, 1881), aka Bullock’s Hypselodoris, range in color from a pale straw, or even white background to a deep purplish pink. There is usually a thin opaque white line at the mantle border, but some have a reddish purple border. Typically the gills and rhinophores are yellow or orange with a basal pink or purplish band.

Nudibranchs in the Order Nudibranchia are the true sea slugs (adults have no shells and externally exposed gills) and are classified as:

Characteristics of dorid nudibranchs include a broad, flat foot, a thick, fleshy mantle, and a circle of gills on the posterior end of the dorsal surface. The gill surrounds the anus. These nudibranchs are also generally the larger species.

Aeolid nudibranchs have long, narrow bodies, lack gills, and have a number of projections on the dorsum called cerata. These slugs are generally smaller in size.

Euarminida nudibranchs are a motley group of species. The species in this infraorder differ greatly amongst themselves which makes very few externally consistent characteristics. Some features that many of the species in this infraorder share are lack of rhinophoral sheaths and, often, oral tentacles, and the anus is far forward on the body. These broad characteristics of the suborders are helpful in determining which suborder an individual belongs to so that it may be identified further.


Originally described from the South China Sea, this species is found in the western Pacific as far south as southern Queensland. They are also found off north western Australia, Indonesia, Thailand, in the tropical western Pacific and the central to eastern Indian Ocean.

All nudibranchs are carnivorous feeding on sessile or sedentary organisms. Each suborder of nudibranch has a major food source. For dorids, most food comes from preying on bryozoans and sponges (Dysidea and Aplysilla) while aeolids and dendronotideans prey upon cnidarian species. Just as the suborder Euctenidiacea is diverse, so is the food they consume. It is important to remember that the substrate a nudibranch is found on may not necessarily be its food source.

All nudibranchs are hermaphroditic, but rarely will they fertilize themselves. Normally nudibranchs will copulate and each individual will lay an egg mass, called a nidosome. Egg masses of a number of nudibranchs are quite distinctive and can be found on substrates where nudibranchs feed or are often found. When the eggs hatch, a veliger larva (larva with a protective shell and a ciliated flap-shaped foot used for swimming and feeding) is usually released. The veliger has a shell, but once the larvae has settled out of the plankton, the shell is released and they enter a juvenile stage.

Very delicate and fussy feeders. Not recommended for aquaria. Nudibranchs are a diverse group of species and are found throughout the world. Little is known about them due to their short life span and the fact that they often appear in one place and disappear shortly after making it difficult to study the ecology and life history of the organisms. The Pacific Coast, and particularly Monterey Bay, has a large number of species of nudibranchs compared to other areas of the world where these animals are found.