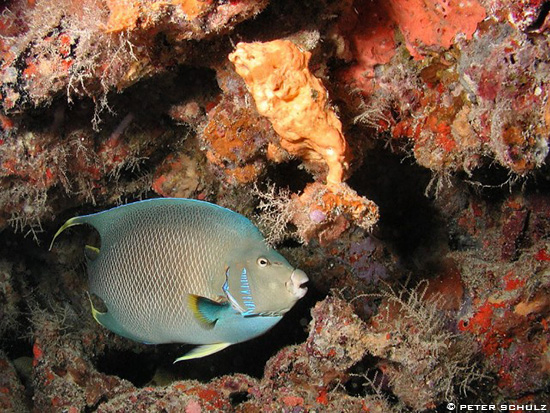 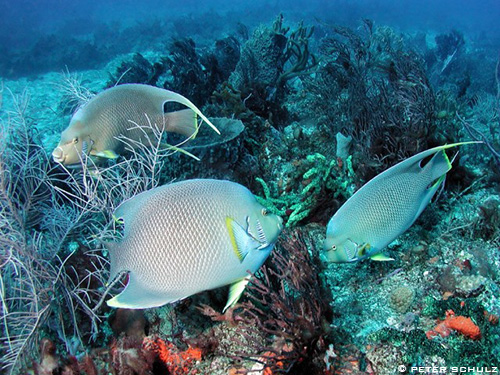 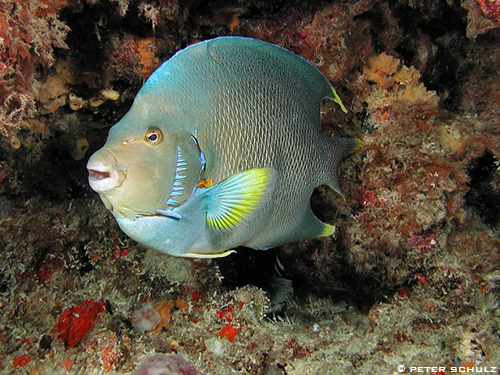 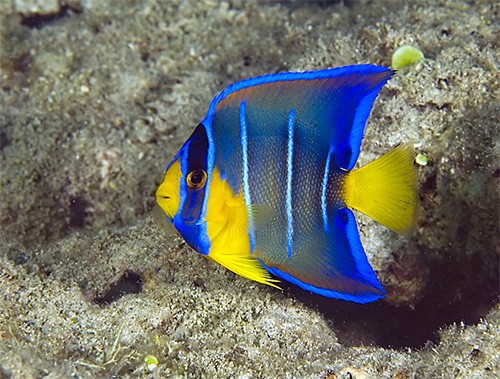 Blue angelfishes, Holacanthus bermudensis (Goode, 1876), aka Bermuda blue angelfishes, blue angels, and corn sugars (Jamaica), are blue-brown/green-colored large angelfishes that have yellow tips/margins on their blue tails (caudal fins) and fins that reach up to 45 cm in length. Blue angelfishes have large mouths and comb-like teeth arranged in brush-like bands.

They can be distinguished from the more brightly-colored queen angelfishes by the absence of an electric blue ring with spots on their foreheads and their tails are blue with a yellow tip/margin rather than completely yellow. Hybrids of blue and queen angelfishes are common in the wild and display characteristics from either or both parents.

Their bodies are compressed and discus-shaped with blunt rounded heads and a single long continuous dorsal fin.


Blue angelfishes, Holacanthus bermudensis, are common in the Caribbean and western tropical Atlantic (35°N – 18°N, 100°W – 64°W) off Bermuda, the Bahamas, and southern Florida, USA as well as the Gulf of Mexico. They are also found off the Yucatan peninsula in Mexico. They are a benthic species that live near the bottom often inhabiting rocky or coral reefs at depths between 2 and 92 m, usually at 5 – 25 m. Juvenile blue angelfishes are often found in bays, channels and around inshore reefs. Like many reef fishes, they sleep hidden inside the reef at night.

The entire population in Bermuda may consist of hybrids between this species and Holacanthus ciliaris.

Blue angelfishes, Holacanthus bermudensis, are generally found in pairs year round and are thought to be monogamous. The males and females will spawn by slowly rising up in the water while bringing their bellies close together and releasing large amounts of eggs and sperm at the same time.

Females release anywhere from 25 to 75 thousand eggs each day, totaling up to 10 million eggs during each spawning cycle. Their eggs are transparent, pelagic, and each contains a single drop of oil to provide buoyancy.

Their eggs hatch within 15 to 20 hours and “pre-larval” angelfishes emerge attached to a large yolk sac with no functional fins or eyes. After about 48 hours, the yolk is absorbed and the blue angelfish develops into a true larvae and begins feeding on plankton in the water. They then grow rapidly and after 3 to 4 weeks they reach about 15-20 mm and settle near the bottom. They can live for up to 20 years.

There appear to be no major threats to this species. Collection is limited and is not considered to be impacting the global population.

Present in several conservation areas throughout its range. The collection and sale of this species in Bermuda is prohibited by law.”

Blue angelfishes, Holacanthus bermudensis, have been associated with ciguatera poisoning which is caused by the accumulation of ciguatoxins in the flesh of tropical marine fishes. Ciguatoxins, produced by marine dinoflagellates, grow on algae and are ingested by herbivorous fishes. Larger fish also accumulate the toxin by feeding on smaller herbivorous fishes, and become reservoirs of toxic levels (to humans) of ciguatoxin. Signs and symptoms include gastrointestinal problems, weakness in the arms and legs, and trouble distinguishing between hot and cold. Ciguatera poisoning can last for several weeks.

Blue angelfishes are taken from the wild commercially for the aquarium trade.