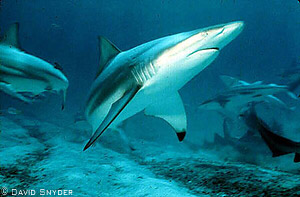 The maximum reported length of blacktip sharks is 2.55 m; average adult sizes are around 1.50 m and weigh in about 18 kg. The maximum age of blacktips is thought to be at least 12 years.

Blacktip sharks are found in tropical and subtropical coastal, shelf, and island waters in the Atlantic, where they migrate seasonally between Brazil and Nova Scotia; the Gulf of Mexico and the Caribbean Sea, throughout the Mediterranean, and along the central West coast of Africa. In the Pacific they range from Southern California to Peru, including the Sea of Cortez, the Galapagos Islands, Hawaii, Tahiti, and other South Pacific Islands, to the northern coast of Australia. In the Indian Ocean they range from South Africa and Madagascar up to the Red Sea, the Persian Gulf, throughout India’s coasts, and east to the coast of China.

Blacktip sharks can be found in both inshore and offshore waters, but they tend to stay close to the coasts at depths of 30 m or less. They are often seen near river mouths, bays, and mangroves, although they do not penetrate far into freshwater like bull sharks.

Like spinner sharks, blacktips have been observed leaping and spinning out of the water, which is likely a feeding behavior. Blacktips attack schools from below at high speed while snapping their jaws to capture prey.

Blacktip sharks are viviparous, meaning they give birth to live, free-swimming young and nourish them during gestation with a placental sac. Males reach sexual maturity between 1.35-1.80 m, or 4-5 years, females at 1.20-1.90 m, or 6-7 years. Gestation lasts 10-12 months followed by birthing in shallow waters during warmer months. Litter sizes range from 1-10 pups, which remain in the shallow nursing grounds for the first few years to avoid predation. Size at birth is 38-72 cm.

Blacktip sharks are listed as Near Threatened on the IUCN Red List:

“Major Threat(s): In the western North Atlantic this species has long been important in the recreational fishery and now is a primary target of the directed commercial fishery along the southeast coast from South Carolina to Florida and throughout the Gulf of Mexico (Branstetter and Burgess 1996, 1997). It is the second most important commercially landed species in that region after the Sandbar Shark (Carcharhinus plumbeus) and its meat is considered superior to the latter species. In the USA, other carcharhinid meat is often sold under the name “Blacktip Shark” because of wide consumer preference for the product. It is a significant constituent of the substantial Mexican shark catch, from both Atlantic and Pacific coasts. Elsewhere, it is the most commonly caught species in the large Indian fishery (Hanfee 1996), occasionally caught in the Mediterranean Sea driftnet fishery (Walker et al. 2005), and surely constitutes a sizeable portion of the catch in smaller scale and artisanal fisheries throughout the northern Indian Ocean and South China Sea. In Australia, it represents a minor component of the shark catch in northern Australia (Last and Stevens 1994). Blacktip Shark meat is primarily consumed locally and fins are dried and shipped to the Far East where they are used in preparing shark-fin soup. In some areas the hides are utilised in preparing leather and the livers are used to extract oil.

Conservation Actions: The Blacktip Shark receives management in only two countries, Australia and the USA. In Australia, it is one of a suite of species that is collectively managed in the limited-entry fishery of northern Australia (Simpfendorfer pers. comm.). A keystone species in the US Atlantic directed shark fishery, it similarly is managed through a management plan that addresses the entire group of species represented in the fishery. At the time of this writing, species-specific management of the Blacktip Shark in the region was forthcoming.”

Blacktip sharks in the Caribbean are a popular tourist attraction during shark feeding dives along with other species such as Caribbean reef sharks.

The International Shark Attack File (ISAF) has reported 28 unprovoked attacks by blacktip sharks to humans. Attacks were reported in the United States (Florida, South Carolina, North Carolina, Virginia, and Alabama), the Caribbean (Bahamas and British Virgin Islands), and South Africa. None of the bites resulted in death. Blacktip sharks are responsible for roughly 16% of the attacks that occur in Florida waters, often striking surfers.

Elasmodiver :: database of sharks, skates, rays, and chimaera’s from around the world
Families Carcharhinidae and Galeocerdidae: Whaler and Tiger Sharks – ReefQuest Centre for Shark Research