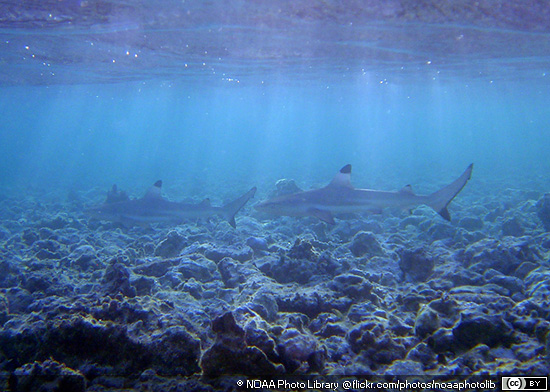 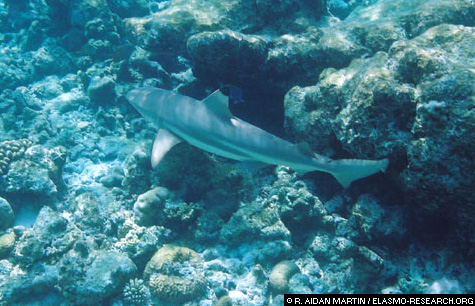 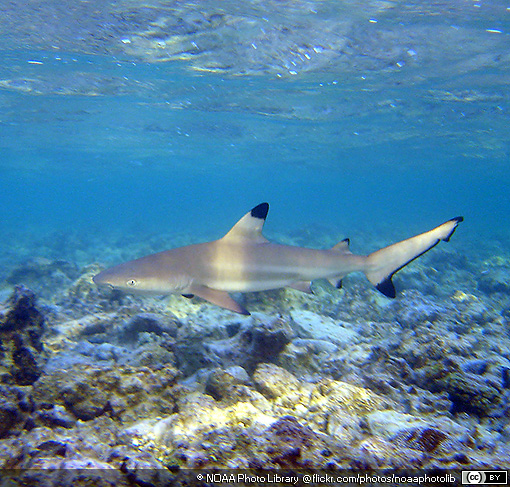 Blacktip reef sharks, Carcharhinus melanopterus (Quoy & Gaimard, 1824), are small sharks measuring up to 1.8 m with short, bluntly-rounded snouts, oval eyes, and narrow-cusped teeth. They have 2 dorsal fins and no interdorsal ridges. Juveniles (< 70 cm) are yellow-brown on their dorsal (upper) sides, white on their ventral (under) sides; adults are brownish-gray and white, respectively. All their fins have conspicuous black or dark brown tips, and posterior (rear) dark edges on their pectoral fins and their upper lobe of their caudal (tail) fins. The prominent black tips of their first dorsal fin contrasts with a light band below it; a conspicuous dark band on their flanks which extends to their pelvic fins. Maximum weight: 24 kg; frequents depth ranges from the surface to 75 m.

This species is commonly found in shallow waters on and near coral reefs and occasionally in brackish waters. Juveniles are typically found in extremely shallow water (±15 to 100 cm) inside lagoons, often swimming along the shoreline; adults typically occur on shallow parts of the forereef, often moving over the reef crest and onto the reef flat at flood tide. Individual adults inhabit a relatively small home range of ±2.5 km2 and appear to reside close to their home reef but occasionally cross deepwater channels between adjacent reefs.

They are also found in mangrove areas, moving in and out with the tide and even in fresh water near the sea. They occur singly or in small groups. Adults often aggregate in reef channels at low tide. This is one of the three most common reef sharks in the Indo-Pacific, the two others are the grey reef shark, Carcharhinus amblyrhynchos and whitetip reef shark, Triaenodon obesus.

They are found in the Indo-Pacific from the Red Sea and East Africa to the Hawaiian Islands and the Tuamotu Archipelago. They are also found in the eastern Mediterranean (through the Suez Canal).

Blacktip reef sharks are fast, pursuit predators that prefer reef fishes, but also feeds on stingrays, crabs, mantis shrimps and other crustaceans, cephalopods, and other mollusks. In the Maldives, this species has been documented feeding cooperatively on small schooling fishes, herding them against the shore and feeding en masse. Feeds heavily on sea snakes in northern Australia. A large individual (1.6 m) was observed attacking a green sea turtle, Chelonia mydas, in North Male’ Atoll, Maldives.

Blacktip reef sharks are viviparous with a yolk-sac placenta, with a gestation period about 10 months and litter size of 2-4 pups. Size at birth ranges from 33-52 cm. Males mature at about eight years of age and 95-105 cm in length; females mature at about 9 years old and a length of 93-110 cm. Courtship features the one or more males following closely behind a female. Reproductive behavior includes distinct pairing with embrace where the male grasps the female’s pectoral fin between his teeth and mates belly to belly. There is one breeding season in the central and western Pacific, but two seasons in the Indian Ocean. Females rest for 8-14 month between pregnancies to rebuild their energy stores. Blacktip reef sharks are preyed upon by other sharks and large groupers. The is a socially complex species that performs a variety of group behaviors.

Blacktip reef sharks are regularly caught by inshore fisheries and are vulnerable to depletion because of their small litter sizes and long gestation periods. Traumatogenic. May become aggressive to spear fishers and are reported to bite people wading in shallow water. Generally marketed fresh (as fillet), may be dried, salted, smoked or frozen. Fins are valued for shark-fin soup; a market that is decimating shark populations worldwide. They are also sought for their liver as source of oil.