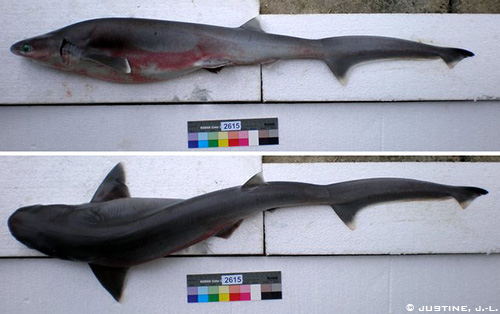 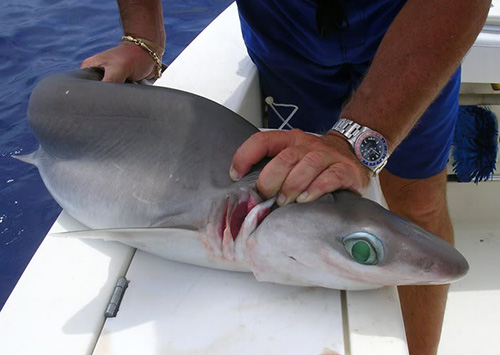 Bigeyed sixgill sharks, Hexanchus nakamurai (Teng, 1962), aka bigeye sixgill sharks, six-gill sharks, are members of the most ancient frill and cow sharks order, Hexanchiformes. Hexanchiform sharks have a single dorsal fin, either six or seven gill slits (versus the 5 found in all other existing sharks), and no nictitating membranes (protective third eyelids).

There are currently four known species of cow shark:

Bigeyed sixgill sharks have been found to reach up to 1.8 m in length, averaging about 1.2 m, and weigh about 20 kg. They are thought to reach sexual maturity when they are 1.2 to 1.78 m in length.

Bigeyed sixgill sharks are small, slim, deepwater cowsharks with narrow heads, large fluorescent green eyes (like sharpnose sevengills), blunt pointy snouts, and fusiform (spindle-shaped) bodies. Their small dorsal fin is set far back over their pelvic fins and they are typically light brownish-gray above and lighter below with white trailing margins on their fins. Young bigeyed sixgills have a black-tipped upper caudal fin (tail fin).

Bluntnose sixgill sharks, Hexanchus griseus, appear similar to bigeyes though the bluntnoses are typically much larger and they have six large teeth of either side of their lower jaws in contrast to the bigeye’s five. Frill sharks, Chlamydoselachus anguineus, differ by having a terminal (at the end of their snout) rather than a ventral (underneath their snout) mouth and fang-like teeth.

Bigeyed sixgill sharks, Hexanchus nakamurai, are found worldwide in deep water over continental and insular (island) shelves and upper slopes usually at 90 to 600 m depths on or near the sea floor. As a primarily deepwater species, bigeyed sixgills are also thought to move toward the surface during the night, most likely following prey during the daily vertical migration of the deep scattering layer.

Bigeyed sixgills are circumpolar (49°N – 35°S, 99°W – 161°E) and in the western central Atlantic they have been found off Mexico, the Bahamas, northern Cuba, Nicaragua and Costa Rica. In the eastern Atlantic they range from France to Morocco, including Mediterranean Sea and possibly off Côte d’Ivoire and Nigeria. In the Indian Ocean they are found off eastern and southern Africa, around Aldabra Island (India) and off western Australia. In the western Pacific, bigeyed sixgills are found off Japan, Taiwan, Philippines, New Caledonia and eastern Australia.

Bigeyed sixgill sharks, Hexanchus nakamurai, likely feed on bony fish and crustaceans though little is currently known about the feeding habits of these sharks. Larger sharks are likely predators of bigeye sixgills.

Bigeyed sixgill sharks reproduce by ovoviviparity with litter sizes up to 13 with pups measuring about 43 cm at birth.

Bigeyed sixgill sharks, Hexanchus nakamurai, are listed as Data deficient (DD) by the IUCN Red List: “The Bigeyed Sixgill Shark (Hexanchus nakamurai) is a little known, moderately large (to 180 cm TL), primarily deepwater cow shark with a patchy distribution in tropical and warm temperate waters in the northeast and central Atlantic; the Mediterranean Sea; the northwest, western central and southwest Pacific; and the Indian Ocean. Probably mesopelagic to benthic in shelf and slope waters from 90-621 m with possible excursions to the surface. The species has often been misidentified as the larger Bluntnose Sixgill Shark (Hexanchus griseus), leading to confusion and poor knowledge of its distribution and no knowledge of any population trends. It is uncommonly taken by bottom trawl and longline gear and is of relatively small importance to fisheries. Due to insufficient information this species cannot be assessed beyond Data Deficient at present. Species-specific catch data are required to better define the distribution, population trends, if any, and threats to the species.”

According to IUCN Red List, the major threat(s) to bigeyed sixgill sharks are: “Apparently uncommonly taken on line gear and in trawls, and considered of relatively minor importance to fisheries (Compagno in prep.). Small numbers are caught off Campeche Bank, Yucatán in Mexican shark fisheries, as bycatch of snapper fisheries in the Cayman Islands, and as bycatch of trawl fisheries off Taiwan (Ebert 1990). The species has also been recorded in very low numbers in catches of the artisanal deepwater long-line fishery operating off eastern Indonesia, where all landed elasmobranchs are utilised (White et al. 2006).

It probably is a minor component of offshore demersal trawl and line fisheries elsewhere where it occurs, but no catch statistics are available (Compagno in prep.).

The species may be under growing pressure with the expansion of deep water fisheries and there is an urgent need to collect species-specific catch data to determine accurate population trends.”

There are no species-specific conservation measures in effect or proposed at this time for bigeyed sixgills. Like most deeper water species, more information on their biology, ecology and importance in fisheries is required to be able to properly assess their threat status and any future conservation needs. Where taken, catches require monitoring, particularly as deepwater fisheries expand worldwide. The development and implementation of management plans (national and/or regional e.g., under the FAO International Plan of Action for the Conservation and Management of Sharks: IPOA-Sharks) are required to facilitate the conservation and management of all chondrichthyan species in the region.

Bigeyed sixgills are not dangerous to people according to the International Shark Attack File, whose records show that there have not been any attacks attributed to this species. This species is utilized for its fins, meat and liver oil in subsistence fisheries but it is of little value due to its relatively small size and low abundance.