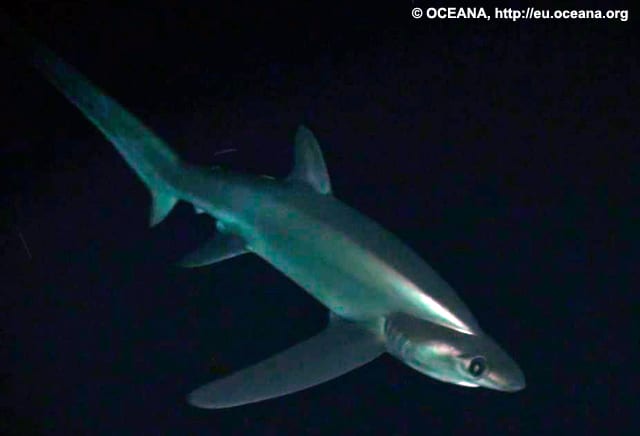 They are a Lamniforme shark with a flattened head and large eyes which are directed laterally but extend onto the top of the head. This flattened head has large indentations or grooves running horizontally above the five gill slits. The Bigeye thresher has large, rounded, elongated and broad-tipped pectoral fins as well as a hugely extended upper lobe on its heterocercal caudal fin. The upper lobe of the caudal fin may even grow to the length of the rest of the body – accounting for 50% of the shark’s total length. The dorsal fin is located to posterior to the pectoral fins and ends just before the position of the pelvic fins. Its dorsal surface is a purplish grey while the ventral surface is a solid cream color. Bigeye thresher sharks can grow up to 488 cm long and weigh in at 363.8 kg making them the largest species of thresher shark but they are more commonly found at lengths of around 350 cm. Their body is covered in a mixture of large and small dermal denticles with the smaller, more numerous denticles being interspersed among the larger denticles. The teeth in the lower and upper jaws are similar in number (19-24) and morphology being slender, smooth and slightly curved.

As a Lamniforme shark, Bigeye thresher sharks are able to raise their body temperature above that of the surrounding environment using the circulatory system known as rete mirabile. This is most clearly evidenced around the head and likely allows their sensory organs to work efficiently for hunting in cold waters.


Bigeye threshers, Alopias superciliosus, are a highly migratory species found throughout the world’s temperate and tropical oceans. Although some populations remain geographically isolated (Atlantic and Indo-Pacific) tagged sharks have been known to make migrations of 2,767 km between New York and the Gulf of Mexico. They are a pelagic species that lives in the open sea but may occasionally visit shallow coastal waters. Bigeye thresher sharks display diel migrations – descending during the day and coming up towards the surface at night. They can range from the surface down to depths of 730 m, though they are predominantly found between 0 and 100 m. They have a preference for surface water temperatures between 16.1 and 25°C.

Bigeye thresher sharks generally feed on pelagic and bottom fish including lancetfish, tuna, mackerel, hake, herring, young billfish and other elasmobranchs. In addition to this they are known to feed on squid and various crustaceans utilizing their long upper caudal lobe like a whip to stun prey before consuming it.

Bigeye thresher sharks are a species with a low fecundity. Living up to 20 years, they are relatively slow to mature with males not maturing until they are 10 years old and females not maturing until they are 12 years old. Bigeye thresher sharks do not have a fixed birthing or mating season and once sexually mature, they can form distinct pairs which mate via an embrace. Pairing and mating appears to take place over continental shelves and slopes. The species are ovoviparous, retaining the eggs in their left and right uteruses until hatched, they can birth a litter of between two and four pups each year. At birth these pups measure between 100 and 140 cm.

The IUCN red list currently evaluates Bigeye thresher sharks, Alopias superciliosus, as ‘Vulnerable’ with a declining population trend due to the depletion of mature individuals. However, there are growing concerns for its extreme vulnerability to oceanic fisheries where it falls foul of bottom and pelagic trawls and gill nets as well as swordfish longline fisheries as bycatch. However, they are also a targeted species for other longline fisheries, game fishing and shark finning. Sadly many of these targeted fisheries are unmanaged or only partially managed across their range. Although not particularly well regarded due to the texture of its flesh it is eaten fresh, smoked, dried and salted as well as in shark fin soup. Their skin is turned into leather products. Bigeye thresher sharks are an important part of the fin trade and account for around 2.3% of the Hong Kong market which is the equivalent of approximately 4 million thresher sharks each year. In 2016 all three species of thresher shark including the Bigeye thresher were placed on CITES Appendix II. The Bigeye thresher shark is listed as a Prohibited Species under the Fisheries Management Plan of the Atlantic tunas, swordfish and sharks though no guidelines are recommended for stocks on the West coast of the USA. The IUCN identifies a need for species management, compliance and enforcement, legislation and research into population trends to protect it against further decline.