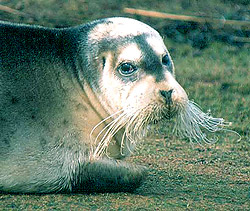 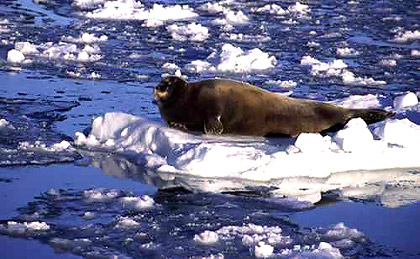 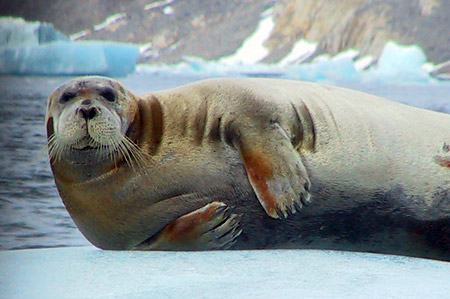 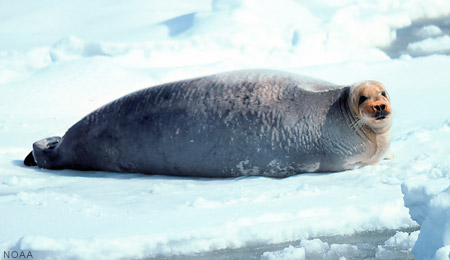 Bearded seals, Erignathus barbatus (Erxleben, 1777), named for their long whiskers, reach 2.1-2.4 m in length and weigh between 200-250 kg. In some regions, the females appear to be slightly larger than the males (sexually dimorphic). Their coats are solid gray to brown. These seals have a noticeably small head in relation to their large bodies.


These are ice-inhabiting seals found in the Arctic Ocean and adjacent seas up to 80-85°N. There are two subspecies of bearded seals:

There is no current population data available. Estimates in the early 1970s were 300,000 for E. barbatus barbatus, and in the 1980s between 250,000-300,000 for E. barbatus nauticus. Bearded seals prefer areas of broken pack ice and drifting ice floes, but they are also found on shorefast and thick ice where they are able to maintain breathing holes. These seals migrate seasonally, moving north with the receding ice in summer. For example, they are known to migrate from the White and Kara Seas to the northern Barents Sea and from the Bering Sea to the Chukchi Sea. In other areas, however, such as the Laptev, Okhotsk, and White Seas and in Alaska, they do not follow the ice, but spend the summer in open water on land, generally on gravel beaches. In Canada, bearded seals have also been reported in rivers that empty into the Hudson Bay. When hauled out on an ice floe, bearded seals are seen at the edge of the floe pointing their head downwind toward the water so that they can move rapidly into the water as a protection against predators.

The bearded seal diet consists primarily of crustaceans (shrimps and crabs), mollusks (clams and whelks), and some fish such as sculpin, flatfish, and cod. They feed in water depths of less than 130 m. They are preyed upon by polar bears and orca (killer whales), and on occasion walruses are known to take bearded seal pups.

Females reach sexual maturity at 3-8 years, males at 6-7 years. Few bearded seals live longer than 25 years. Most pups are born from mid-March to early May, depending on the region. At birth, pups average 1.3 m in length and 34 kg in weight and are born with a grayish-brown coat with light patches on the face, head, and back. Bearded seal pups are able to swim almost immediately, and have been observed diving as deep as 75 m for 5 minutes at less than one week old. Pups are nursed for about 18-24 days and gain weight quickly. They molt into their adult coat at the time they’re weaned. It is believed that the females begin mating again around the time of weaning. Adult males have a loud underwater call to signal mating readiness and to defend his territory.

The impact of natural events and human-caused activities on bearded seal populations is difficult to determine because accurate population data is not available.

A growing concern is change in the Arctic climate which is changing water flow and nutrient transport in the Bering Strait, as well as a decrease in ice habitat caused by global warming. Furthermore, oil and gas interests in the bearded seal habitat, particularly the Chukchi and Beaufort Seas, may degrade their environment and decrease food supply. Ship traffic in the Northern Sea Route is also a cause for concern. Commercial fishing may also cause problems in the central Bering Sea if bearded seal prey such as clams, crabs, snails, and whelks are depleted.

The bearded seal is a popular species with Arctic coastal communities who hunt it for food, fur, and oil. An estimated 1,500-2,000 seals have been killed annually in the Bering and Okhotsk Seas, however, current figures are unavailable. Partial data for the 1990s (Norton Sound region and Kotzebue Sound region) indicate an annual kill of about 1,750 seals.