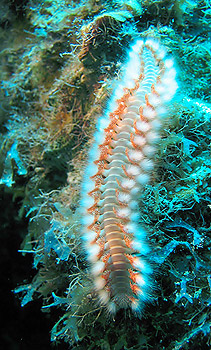 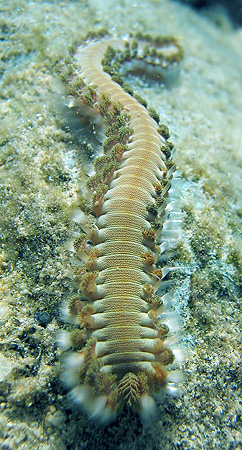 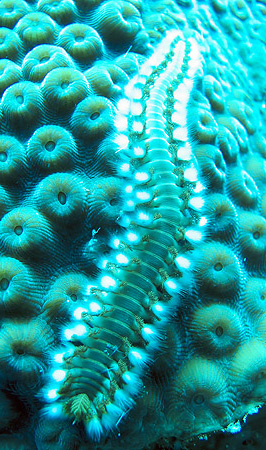 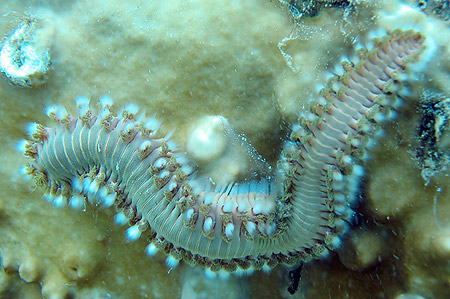 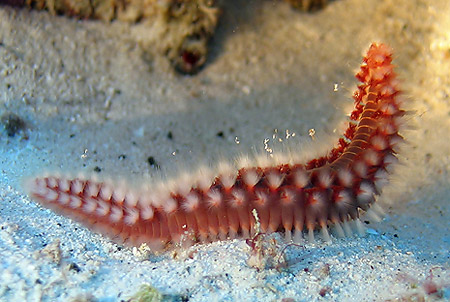 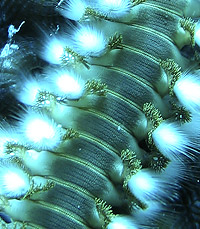 Bearded fireworms, Hermodice carunculata (Pallas, 1766), are a type of bristleworm of the fireworm Family Amphinomidae. These beautiful flattened segmented worms, reaching 35.6 cm (typically 7-10 cm) in length, with groups of white bristles along each side. The bristles are hollow, venom-filled chaeta which easily penetrate flesh and then break off if this worm is handled. They produce an intense burning irritation in the area of contact, hence the common name of the species. When disturbed, the worm flares out the bristles so they are more exposed.

Class Polychaeta, the bristleworms, is the largest and most primitive group of annelids, and the majority are marine. They are often strikingly beautiful and very colorful and, unlike the other two groups of annelids (Classes Clitellata and Pogonophora), they show enormous variation in form and lifestyle. Apart from the head and terminal segments, all the segments are identical, each with a pair of flattened, fleshy lobe-like paddles called parapodia, which are used for swimming, burrowing and creating a feeding current. The bristles, or chaetae, on the parapodia are immensely variable between species. In the sea mice, for example, they form a protective mat over the back of the worm and give the animal a furry appearance. The bristles of fireworms, on the other hand, are long and poisonous for defense, and are shed readily if a worm is attacked.

Bearded fireworms are abundant on reefs, beneath stones in rocky or seagrass areas and on some muddy bottoms. They have also been found at or near the surface in flotsam and occurs to at least 60 m. They are found throughout the tropical western Atlantic and at Ascension Island in the mid-Atlantic.

Fireworms are voracious predators that feed on soft and hard corals, anemones, and small crustaceans. They engulf the last few centimeters of the tip of a branching coral, such as Acropora cervicornis (staghorn coral), in its inflated pharynx and remove the coral tissue right from the skeleton. They typically spend 5-10 minutes at each branch tip, visiting several, and the “skinned” branches are apparent by their white ends.

The effects of predation on certain groups can be substantial. Witman (1988) calculated that tissue predation by this worm on Milleporid Hydrocorals (fire coral) exposed 12.9 cm2 per 1 m2 per day of skeleton to algal colonization.

Although H. carunculata prefers the tissue of Cnidarians, they will readily accept and thrive on alternative foods in captivity. These include: squid, clam, shrimp, krill, mysid shrimp, mussel, etc.

When bearded fireworms come to the surface to mate, the females start to emit a greenish phosphorescent glow. This attracts the males, which dart towards the females, emitting flashing lights at the same time. As the different sexes approach each other, the sex cells are shed and combine.

The species Hermodice carunculata is sometimes accidentally introduced into home aquariums; take great care when handling them. If you do happen to become exposed to fireworm spines, Nellis (1997) recommends that the spines be removed by applying adhesive tape on the wound and then removing it. Rubbing alcohol my help alleviate some of the pain.