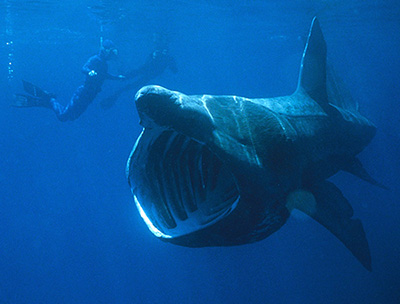 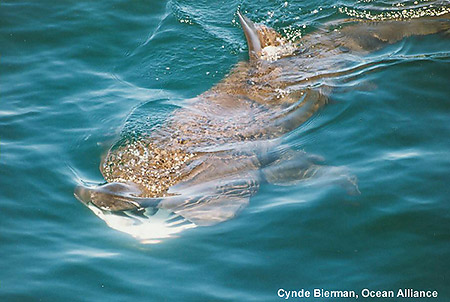 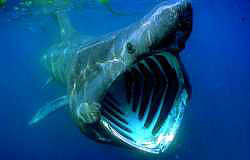 Basking Sharks ~ Shark Juggling?! And the Death of a Deity… :: MarineBio Video Library

Basking sharks, Cetorhinus maximus (Gunnerus, 1765), are recognized by their huge sizes, conical snouts, sub-terminal mouthes, extremely large gill slits, dark bristle-like gill rakers inside the gills (present most of the year), strong caudal keels and large lunate (curved) tails. Basking sharks have numerous, small teeth. Their bodies are mottled gray/brown to slate-gray or black in color, sometimes with lighter patches on the dorsal side. The ventral side is paler, often with white patches under the snout and mouth or along the ventral side. Two albino basking sharks from the North Atlantic have been recorded. It is the second largest fish, only surpassed by the whale shark. Their average size is 6.7-8.8 m. The largest measured basking shark was 9.75 m, and a 9.14 m long individual was recorded that weighed 3,900 kg. There are also unconfirmed reports of basking sharks up to 13.7 m long.


Basking sharks, Cetorhinus maximus, are generally found in temperate waters of both the Pacific and Atlantic Oceans.

They are usually observed by humans at or near the surface and have been sighted along almost every coastline bordering both the Atlantic and Pacific Oceans. Along the west coast of North America, they have been sighted from British Columbia to Baja California, usually in the winter and spring months. This trend is reversed in North Atlantic areas.

Basking sharks can open their cavernous mouths up to 1.2 m wide! This allows water to pass over their gill rakers, which strain small fishes, eggs and invertebrates out of the water. They are often seen feeding near the surface.

Basking sharks give birth to live young; the smallest juvenile recorded measured about 1.65 m in length. Cetorhinus maximus females are believed to reach sexual maturity when they reach 4-4.9 m in length. Basking sharks have been observed breeding in the North Atlantic in May. The location of pupping and nursery grounds is unknown.

Basking sharks have supported harpoon and net fisheries throughout the North Atlantic for centuries. They were fished for their liver oil, which was burned in lamps until replaced by petroleum products. A single shark yielded between 757-1,514 liters of oil.

Basking shark populations have been declining since the 1970s; they never fully recovered from the large scale commercial fisheries of the 1950s and remain over-fished in the North Atlantic.

The UK Marine Conservation Society has been running a project called Basking Shark Watch since 1987, which has temporal and spatial data of over 21,000 sharks from over 5,200 records. They have the largest database of basking sharks from effort-based transects, tagging studies and public sightings in the world, and are keen to promote the project to gather sightings from other European countries.
Pelagic.org