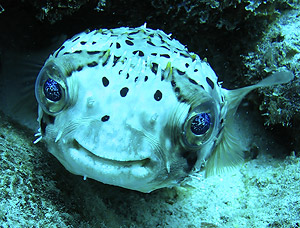 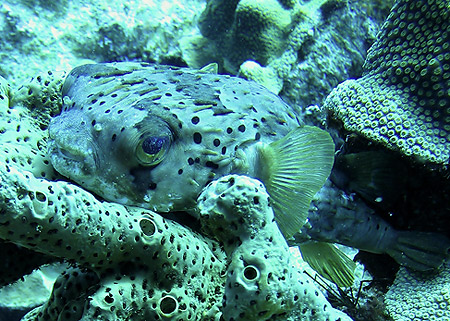 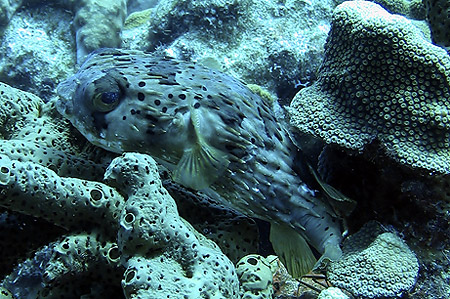 The body of the balloonfish is covered in long, sharp spines that extend when the fish inflates by taking in water. All members of the Family Diodontidae are capable of inflation, and may also change in color when threatened.


Balloonfishes are circumtropical in distribution. These fish are found in the Western Atlantic from Florida, USA to the Bahamas and Brazil, in the Eastern Atlantic around 30°N-23°S, and in South Africa. In the Eastern Pacific from Hawaii to Pitcairn and the Easter Islands, and from southern California, US to Colombia and the Galapagos Islands. They are reef fish with a depth range of 2-100 m.

Balloonfish are nocturnal predators, generally hiding in crevices in the reef during the day. The teeth are fused forming a strong, beak-like mouth for consuming snails, sea urchins, and hermit crabs. These fish are relatively poor swimmers.

Juveniles are consumed by pelagic predatory fishes such as tuna and marine mammals such as dolphins. Adults fall prey to sharks.

They reproduce via dioecism (sexes are separate) and fertilization is external with a spawning frequency of one clear seasonal peak per year.

Balloonfish have a pelagic life stage. Spawning occurs after males slowly push females to the surface. The eggs are buoyant, hatching after approximately 4 days. The larvae are well developed with a functional mouth, eyes, and a swim bladder. They are predominately yellow with scattered red spots, and are covered with a thin shell until they are about 10 days old, after which the shell is lost and the spines begin to form. Approximately 3 weeks after hatching, the fins and fin rays are present and the teeth are formed. As juveniles, they develop their olive to brown color with dark spots appearing on their ventral (under) side that serve as camouflage for juveniles floating in Sargassum weed. The spotting is retained until the juveniles move inshore and become adults.

Balloonfish are used in Chinese “medicine”, reports of ciguatera poisoning.